Then He Kissed Me Whispering Bay # 2


Nate Miller may have been a nerd in high school, but now he has a beautiful girlfriend and is set to take over Doc Morrison’s medical practice. Still, the good folks of Whispering Bay find his no-nonsense approach more than a little unsettling, leaving his future in town a great big question mark. And things go even further downhill when his well-intentioned marriage proposal goes awry.


Lauren doesn’t need a man to complete her, yet when she finds herself set up on a date with Nate, she can’t help but notice how sexy and confident he is. In fact, every time the former introvert kisses her, she sees fireworks. But, only a big love will make Lauren change her mind about commitment. As Nate attempts to win Lauren over, a real estate co-op threatens Lauren’s business—and Nate’s ex still has a thing or two to say about their previous relationship. Now Lauren has to decide to go big or go home, in business, as well as in love. 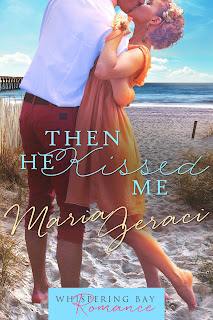 Excerpt;
He helped her clear the dishes. Twice, they bumped into each other (on purpose?) and Lauren got a whiff of his cologne. Her pulse skyrocketed and her brain turned to mush. She was dying here. She really was. Henry should be back any second. But she wanted to know the answer to that last question of his. Did Nate want to date her? What was he really doing here? It was now or never.
“I’m sorry about Henry and his…questions.”
“He’s a great kid. It’s natural he’d be territorial about his mom.”
“Territorial?”
“Sure. He’s sees me sniffing around and he’s suspicious.”
She tried for a light tone. “So that’s what you’re doing. Sniffing?”
His expression turned serious. “Absolutely. The dog was just a pretense. Well, it was also convenient that he chose the sidewalk in front of your house.” He hesitated. “May I ask you a question? What were you doing on a date with Ted Ferguson?”
She couldn’t help but cringe. “My mother set it up.”
“I hear she’s good at that sort of thing.”
They both smiled. Then he cleared his throat. “I know the evening didn’t end well, but I’m not one to make assumptions. You’re not dating him now, are you?”
“That would be a big fat no.”
“Are you seeing anyone else?”
“I’ve had two dates since my divorce. Ted. And…you.” An image of that last perfect moment on the beach flashed through her mind. “Nate, what are we doing? I mean, that kiss was…”
“Spectacular? Earth-shattering? At least, I hope that’s what you were going to say. As for what we’re doing, I think that’s obvious. I know we got off to a rocky start, but I’m attracted to you. And I pretty sure you’re attracted to me, as well.”
He thought their kiss had been Earth-shattering! She felt a moment’s relief to discover that it hadn’t been just her.
“But you just got out of a serious relationship. Are you sure you’re over Jessica? Because I don’t want to be anyone’s rebound.”
“You wouldn’t be a rebound,” he said.
“What would I be then?”
“A beautiful, fascinating woman that I want to get to know better.”
Yikes! No one had ever been interested in her as a woman. As a girl, she’d had plenty of admirers in high school. Then, she’d gotten pregnant. And married. But her marriage had been a ticking time bomb. It hadn’t been either of their faults. She and Tom had been young and they’d tried, but their love hadn’t been deep enough to sustain them into adulthood. She wasn’t a narcissist, but she knew men found her attractive. No one, however, had ever called her fascinating before. Was it a line? Nate certainly didn’t seem like a player. But less than a month ago she’d seen him get down one knee and propose to another woman. What if Jessica wanted him back? It could happen. And once again she’d find herself with a man who deep down, really wanted someone else.

Maria Geraci writes contemporary romance and women’s fiction with a happy ending. The Portland Book Review called her novel, The Boyfriend of the Month Club, “immensely sexy, immensely satisfying and humorous.” Her fourth novel, A Girl Like You, was nominated for Romance Writers of America’s prestigious RITA ® award. She lives in north Florida with her family, which includes a very needy chihuahua, an extremely needy dachshund and a not-so-needy cat (guess which one she likes best?). You can reach at her www.mariageraci.com

Rafflecopter Giveaway (Grand Prize: Vera Bradley Beach Tote and a Second prize for a Signed Print Copy of That Thing You Do)