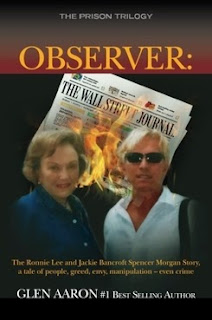 
Glen writes both fiction and nonfiction from his forty-year career and experience as a trial lawyer and consultant in international business and banking.


When Jackie Bancroft's husband died in 1952, he left her an heiress to the income and value of The Wall Street Journal and one of the wealthier women in America. Almost 50 years later, Jackie would mary Ronnie Lee Morgan, a 50 – year old gay interior decorator. Morgan was one of many clients in the active law practice of author Glen Aaron. This unusual marriage lasted until Jackie's mysterious death five years later. Throughout that period, Aaron became entwined in the personal lives and demands of the couple, along with handling many of their legal affairs. The huge money and property distributions made by Jackie to her husband, designed and handled by Aaron, resulted in a two – year federal prison sentence for Aaron. The first book in the Prison Trilogy is this story.


Buy: Amazon
...to sharing a prison cell with a 70-something Army officer…
• In prison, Aaron was assigned Colonel George Trofimoff as his cellmate. The Colonel turned out to be the highest-ranking U.S. Army officer ever convicted of spying. After initially resisting, Aaron agreed to look at the Colonel's case with the hope of finding a reason to make an additional appeal. What he found was a complete travesty of justice. For two years, an FBI agent had posed as a D.C. Russian Embassy representative in a sting operation designed to entrap the Colonel into exchanging what turned out to be a made-up story of espionage against America for the promise of a $45,000 payment. The resulting federal trial in Tampa railroaded the Colonel into a life prison sentence. The second book in The Prison Trilogy is that story.

• The last book in the Trilogy sensitively portrays author Aaron’s fellow inmates in Part I: their uniqueness as people, the situations that brought them to prison, the hopes of some, the hopelessness of others. In Part II, the author describes the prison experience. This third book in The Prison Trilogy is not an "oh-poor-me" tale. It is a tale written with straightforward honesty and eye-opening enlightenment unknown to the average person. Aside from being a must-read, it is entertaining.