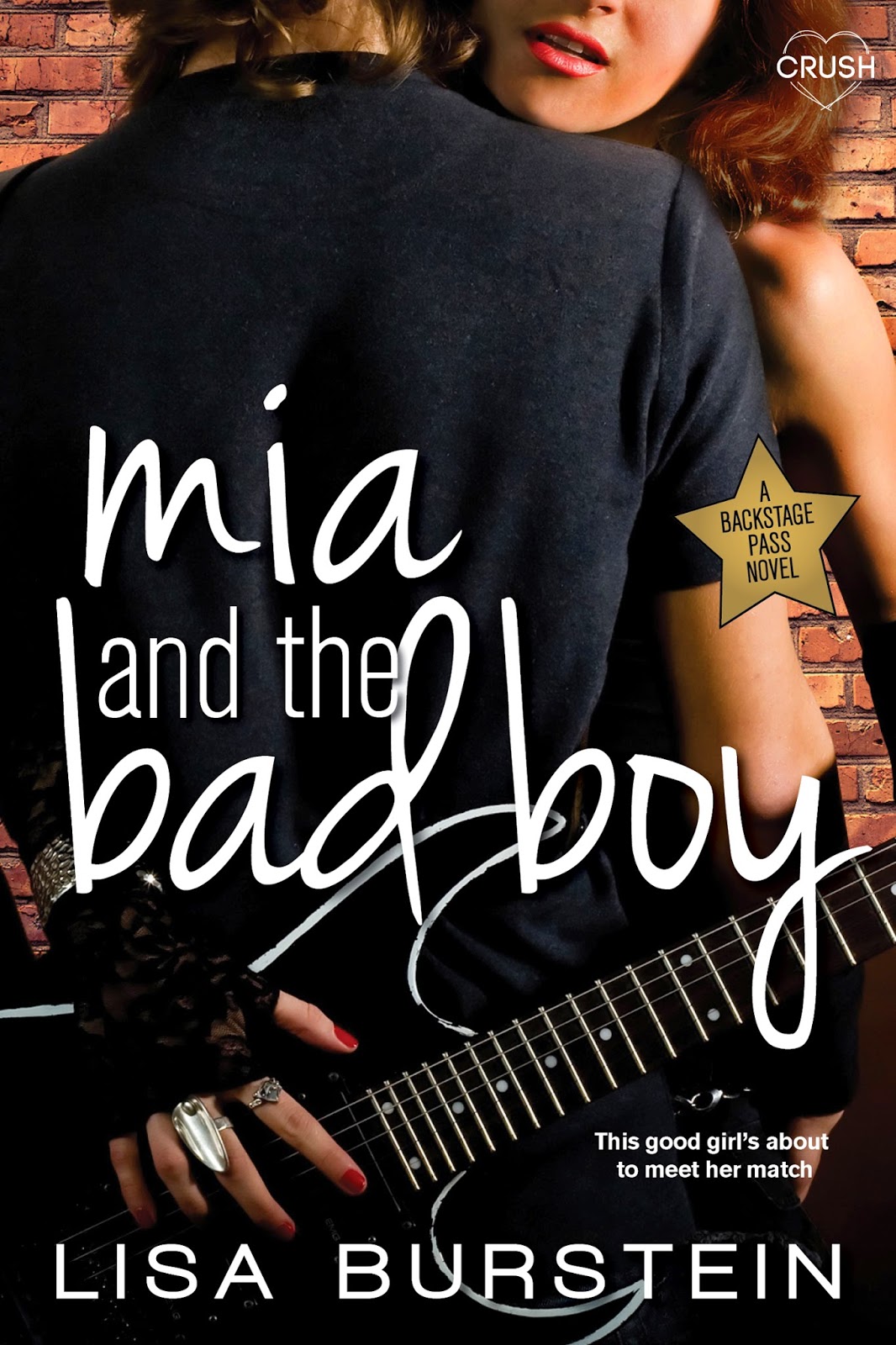 Summary from Goodreads:
This good girl’s about to meet her match…

Ryder Brooks is living the dream—he’s famous, loved by millions of girls, and miserable. All he really wants is to write his own music, not Seconds to Juliet’s sugary sweet pop. In order to do that, though, the “bad boy” of the band will have to play by the rules. And that includes behaving with his new—and super cute—über-good-girl tutor.

Mia Reyes is in fangirl heaven. Tutoring her favorite member of her favorite band? It’s a dream come true…until it turns into a complete nightmare. Ryder is nothing like she thought. He’s crude, arrogant, and pretty much a total jerk. And the worst part? She’s roped into pretending to be his girlfriend so that no one finds out he’s being tutored. Fake kisses, plenty of PDA, and even sharing his hotel room…

But sometimes even the baddest of bad boys needs a little redemption.

His hand framed her chin, tipped it up toward his lips. Just that small touch made it hard for her to breathe. She could feel the pulse in her neck ticking up, her heart rate matching her excitement in a way it never had before.

“I’ve been wanting to do this since our date in St. Louis,” he said with a throaty whisper.

“I’ve been wanting to do this since I taped your poster on my wall,” Mia managed to say.

Ryder’s hand was still on her chin. He nudged in tighter, so she could feel his breath on the skin of her cheeks. She didn’t know what to do with her hands. They were tight at her sides, like she was paralyzed.

“You’re not going to kiss me just because I’m Ryder Brooks, though, right?” he asked with a sly smile.

“No,” Mia said, the words coming easier. She slipped her arms around his waist. His skin was so warm, and his jeans were damp. She felt the muscles of his waist yield to her touch. “When I met you, I kind of hated you, and kissing was not the word with a K that came to mind.”

Mia laughed, ripples of heat dripping down her abdomen as Ryder inched his lips closer. “You’re really using your vocabulary.”

“But now,” Mia said, her hands clasped tightly around Ryder’s bare back, “I want to kiss you in a different way. Not because you’re Ryder Brooks, but because you’re you.”

“That’s why I want to kiss you, too.. His lips brushed against her nose first, each cheek, sending bursts of pleasure into every soft part of her.

Mia closed her eyes and puckered her lips, puckered them so hard she thought her face might crack.

She heard Ryder suppress a giggle.

Mia’s eyes popped open. “What?” Her organs turned to ice. She wanted to crawl under the bed.

Ryder ran his finger along her cheek. His other hand slipped up her arm, bringing her closer. “Let me teach you for a change.”

Mia swallowed, afraid if she spoke, this might turn to dust.

Ryder opened his lips and brought them to hers slowly, hovering there, his breath fanning her face. “Don’t pucker. Just do what I do, what I cannot wait to do.”

He pressed her lips open slightly, driving his tongue against them and gliding it against hers until it was in her mouth, sliding against her tongue. Tongue! She’d known this was how people kissed but had never understood the reasoning. Tongues were for tasting, for talking. But now she knew that really they were for this.

Having their mouths connected, Mia mirroring each move Ryder made, created a chemical reaction, flipped a switch. She suddenly knew exactly what to do. Her hands were on his broad chest, running down his tight stomach, his covetable abs. His hands were in her hair, curving against her side. His tongue dipped with hers; his mouth was warm and firm and perfect.

“Great show,” she said, needing to say something. She clasped her hands in her lap.

“The fans seemed to like it,” Ryder said, standing just beyond the doorway. “You didn’t have to wait up for me.”

“I kind of did,” Mia said, indicating the couch. If she set up the bed, that meant she was okay with this arrangement, and while her body definitely was, it was hard to get her mind to catch up.

Never mind catching up. Before Mia could even take another breath, Ryder was peeling off his shirt like Mia wasn’t even there, or maybe he’d done that because she was.

“Sorry, I can’t wait to get out of my clothes as soon as the show is over.”

They both looked at his belt buckle.

Ryder laughed. “I’ll change in the bathroom per your rule,” he said.

She understood with more and more certainty that she was going to share a bed with Ryder Brooks.

Would he try to kiss her? Would he try more? Would she be able to deal with it if he did? What if he didn’t? The questions swirled around Mia’s brain like fireflies.

“We don’t have to go to sleep right away,” Ryder said, maybe sensing her fear.

“I don’t know if I’m going to be able to sleep at all,” she admitted.

“You don’t have to be scared,” Ryder said, the muscles in his arms bulging as he pushed his hair back. She stared at the tribal tattoo wrapped around one bicep, black as the darkest reaches of outer space.

Mia’s mouth started to water and she realized she wasn’t only scared, she was hungry. She wanted to touch Ryder’s tattoo, taste the water and sweat on his skin. Regrettably, the hunger scared her, too. Mia spit-laughed to cover it up. “You think I’m scared of you? No way.”

“Then I guess I’ll change my pants right here,” Ryder replied, clearly calling her bluff. He moved his fingers to his belt buckle, and her heart seemed to fly up and beat from behind her eyes. He was taking her right to the edge.

Mia looked down. She needed to tell him the truth. “Considering what I admitted last night, it shouldn’t surprise you that I’ve never shared a bed with a boy before. I know this is an every-night thing for you, but it’s not for me.”

Ryder’s mouth widened into a grin that made Mia crave this being an every-night thing for her.

“Haven’t you ever done something your mother wouldn’t approve of?” he asked, stepping closer to her.

“Sure,” she said, not understanding how talking about her mother was supposed to make her feel any calmer about sharing a bed with Ryder.

“So tell me, then.” He stood over her, his stomach at eye level.

She was staring at Ryder Brooks’s belly button, his chiseled abs. How had she not died yet?

Mia searched her brain. Was it really that her mom would freak out if she knew she was sharing a bed with Ryder, or if she knew Mia’s feelings for him would probably only increase once she did?

“Maybe I should guess,” Ryder said, the muscles of his stomach moving up and down as he spoke. “You rode a mechanical bull once, or tied a cherry stem with your tongue.”

She looked up at him, shirtless, beautiful, wet Ryder Brooks, and said something that no girl in her right mind would ever say. “And then what? Will you reciprocate by telling me about this one time at band camp?”

Ryder burst out laughing. “I got kicked out of band camp.” He headed toward the bathroom. “Don’t worry,” he said, peeking out from behind the door before he closed it. “I’ll put a shirt on.”

A thought her mother definitely wouldn’t approve of clouded her vision, but she couldn’t bring herself to say the words out loud. I don’t want you to. 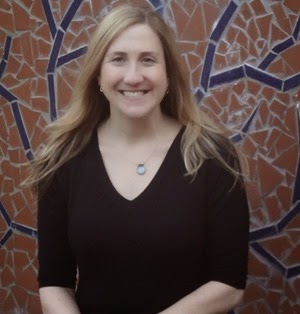 About the Author
Lisa Burstein is a tea seller by day and a writer by night. She received her MFA in Creative Writing from the Inland Northwest Center for Writers at Eastern Washington University and is glad to finally have it be worth more than the paper it was printed on. She lives in Portland, Oregon with her very patient husband, a neurotic dog and two cats.

She wrote her first story when she was in second grade. It was a Thanksgiving tale from the point of view of the turkey from freezer to oven to plate. It was scandalous.