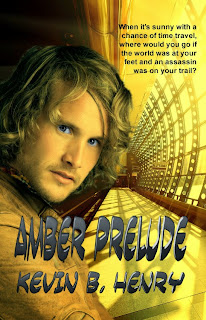 
Mitchell didn't really believe the story the Man told him, Just take a sip and speak a year. He whimsically chose a historic event to witness. Little did he know he would become part of that history. Faster than you can say Teithwyr Amser our man Mitchell is chasing a bona fide assassin not only across America but across time.


Amber Prelude will require Mitchell to travel from the America he knows to France and Africa. He will travel to decades and centuries he is unfamiliar with. Mitchell will chase authentic villains and make historic friends, all in an attempt to set history back the way he remembers.


It had started simply. I uncapped the vial, drank the liquid, and spoke the year I had chosen aloud. The room spun. I dissolved.


I anticipated nothing happening. I began by sitting at the old wooden table feeling numb. My expectations extended to looking for shelter the following morning. Maybe I would move under a bridge for a short time; maybe I would do something much worse to myself.


I’d experienced severely morbid thoughts for months. Moving often transformed me. A nightmarish combination of a manic and depressed person was all I had been until the vial. It continued for months, and I expected it to continue forever. What I didn’t expect was a twisting feeling in my chest and lower abdomen. It wasn’t painful, just an unusual feeling. I didn’t expect the room to blur. I blinked several times, but it wasn’t my eyes; the room was blurry. Soon the room ceased to exist.


I had not spent long hours considering the year I would move to. I flippantly selected 1963. It would give me almost ten years before my birth moment and I vanished from the universe forever. The Man was specific about not existing past my birth moment. It would give me a chance to see some of the most tumultuous years in America, civil rights marches, hippies, the moon landing. My choice of year would give me a chance to stand at Dealey Plaza and personally see if there was a second shooter. It was a shallow choice, but it was the best I could come up with.


My first thought as the world congealed around me was that I had said something wrong. Had I said 1863? It was night. The stars above me were crisp and clear. Sagebrush surrounded me in all directions. Gone were the smells of the city. My senses absorbed a clean, fresh smell. This was how I remembered the world use to be. A scrub oak blended with the evening shadows just a few feet to my right. To my left was a light in the distance, a campfire. The flames created dancing shadows on the two trees surrounding the fire. Someone sat next to the fire, stirring the flames, sparks rising into the starry sky.


I walked toward the fire. I didn’t see that I had any choice; every other direction was pitch-black. Halfway there he rose from his place at the fire and raised his left hand above his head.


“About time, Mitchell,” he yelled. “I’ve been waiting here for damn near three days.” “Come on in. I’m sure you have questions, son.”


I got over my initial anxiety of the twinkle man and sat on the far side of the fire. We had been sitting before the fire for fewer than five minutes. I was dazed, confused, and overwhelmed. Less than an hour ago, I was sitting in a dingy, two-bit hotel room.


Now, here I was, in some large expanse of desert in the company of someone who looked like Ray Teal, that quintessential sheriff on so many TV westerns and movies. He wore standard blue jeans, a simple button-front dress shirt, and a light-gray jacket. This twinkle man had a slouch hat, not exactly cowboy, but not a fedora either. He was half a foot shorter than me, stockier, and a minimum of twenty-five-years older, if I had to guess his age. There was salt and pepper stubble covering his face. His voice was deeper than mine, but not so deep that I envied it.


“New Mexico,” he answered without hesitation. “You’re about three miles east of Tucumcari.”


I considered that answer. “When am I?”


“What’s the date, the day?” It concerned me I might miss my reason for picking this year.


His answers were rapid-fire, no pauses or measurable moments that I would have considered creative thinking. He was either telling the truth or extremely well prepared for my random questions. I tried to think of the relevant questions I should ask. The standard ones, who, what, when, where, seemed a good place to start.


“Well now, that’s an obvious answer to a poorly considered, ill-thought out question.” He shook his head. “You took a drink from that vial you have tucked away in your jacket pocket.”


A sudden gust of wind caused me to wrap my windbreaker tighter around my body. Maybe it wasn’t the night air. I was a little hurt. It wasn’t an attempt at sounding stupid; just understand what had happened to me.


“How did you know I was coming?” Maybe that question would seem less inept.


“Now that’s complicated.” He answered this question more slowly. He was thinking more and not just responding. “My name is Gil, Gil Seward. I got a letter just a few days ago. It asked me to come here and see if you’d appear. The letter said to just wait here a while and see if you drank from the vial or not. If you did, I’m supposed to help you out a little. Get you started and send you on your way.”


“Asked by whom? That guy who gave me the vial?”


“Yeah” was his only response. I hate one-word answers.


“He was someone I owed a favor. I haven’t seen him for a long time. He isn’t someone you need to know. Forget him. I don’t know why he decided to give you his vial. He just did.”


He paused for a while, stirring the fire with his stick, a small branch from one of the nearby trees.


“Okay, Gil,” I said, using his name for the first time. “Why the hell do you sparkle? You look like some creation by Industrial Light, a special effect in a vampire or science fiction movie.”


“Forgot all about that,” he laughed. “You sparkle too. You just can’t see it. You started as soon as you drank from the vial. All Amser will sparkle.”


“Sorry, Mitchell, You’ve reached your limit on questions for now. It’s my turn to ask some.”


I started to say something, but the look on his face made me stop. I hoped that ‘for now’ meant there would be more answers in the future.


“What made you pick this year?”


“It wasn’t a rational decision. Who would believe this would really work? I figured I’d see something special, something historic. Dallas and the Kennedy assassination was a significant event in my life. All the other conspiracy theories I remember while growing up could never surpass this one event. Standing on the grassy knoll and knowing beyond a doubt if there was or wasn’t a second shooter seemed as good an idea as any.”


“With all of history to choose from, you wanted to watch somebody die?”


“That wasn’t my motivation.” I said “I thought of it more as watching a documentary on TV.”


“We’ll see what you think of your documentary as you watch it live. Did you have plans afterward?”


“I don’t have many concrete plans. Just live out the next decade before I die.”


“The Man said I couldn’t live past my birth moment. That was another reason I came here. That gives me several years to live before that time.”


“You have it all wrong, Mitchell. You can use that vial repeatedly. Just refill it. You can travel to any year, any time, as often as you want, as many times as you want. You’re not stuck in this year or decade forever.”


I’m not sure my mouth actually fell open, but that is how I remember it. 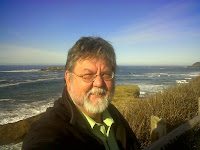 
From an early age, Kevin B. Henry was a voracious reader. His collection of science fiction, fantasy and mystery books bring tears of envy to the eyes of many small community libraries.


Kevin has worked as an educator, technology specialist and day laborer most of his adult life. During all that time he lived the life of a frustrated author. That it took 30 years for him to piece together the series, Amber Gifts is a testament that the best meals need slow cooking to bring out the flavor.


The Amber Gifts Series begins with Amber Gifts. The second story, which is really the first, is Amber Prelude, and is available now. The third story, Amber Legacy continues where Amber Gifts left off. It will be available in November 2015. All are published by the wonderful folks at the Champagne Book Group. A fourth story is in the process of being written.


Kevin is a natural story teller, so it’s logical that he lectures occasionally. Topics range from the implementation of cutting edge technology hardware to the creation, modification and use of e-books within education. He constantly pursues research to expand his range of possible topics. His most recent research revolved around the aerodynamic properties of reindeer. He’s also been known to include little known facts and trivia within his presentations. Did you know just 146 years ago today the Union Army marched into Atlanta. It took longer than anticipated. They were delayed by a traffic jam on I-75 and the toll booth on Ga. 400


He continues to live in the Mid-West without human or domesticated mammal companionship.