50 Acts of Kindness by Ellyn Oaksmith Book Tour and Giveaway 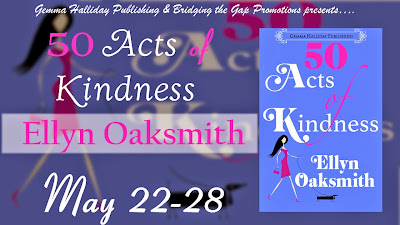 Being overly kind isn't in Kylie Harrow's nature. This has never been more evident than when Kylie vents her frustrations to an innocent employee—and the whole scene is posted online, tanking her career and earning her the dubious distinction of "World's Worst Boss." But when she flees home to the South, Kylie finds her childhood home has changed. The high school quarterback is now the hot and handsome sheriff. Her mother has turned her home into a nudist colony. And worst of all, having heard about her daughter's exploits, her mother won't let her in the door until Kylie completes fifty kind acts in fifty days.

The task seems easy enough at first—and may even help repair her media image—but it quickly turns into a hilarious quest that leads Kylie down a bumpy road filled with new challenges. What started as a gimmick to save her career evolves into a mission to save a spunky old woman and her little dog from homelessness. As Kylie learns about the nature of kindness, she finds the path to happiness and, for the first time ever, maybe even love.

Excerpt:
"We are a technology marketing company. People don't want to see our underwear or ultrasounds or try to run a meeting while you jump up to pee."
"I'm due in two weeks."
Her whine was still grating on my nerves, but my recorded words sliced like knives. Was I the equivalent of that rooster my mom had that pecked at the hens? One morning mom found him dead, pecked to death. I thought, "Please do not let this be my barnyard reckoning," even though things were clearly sliding in that direction.
On screen I plowed forward. "I cannot do your job and mine. It's killing me. I need you on the ground running. Oh no wait, you can't run. Which is why you missed the flight to Miami where you got 'dehydrated.'" I did air quotes around "dehydrated."
Holy cow. I was so angry it blinded me to very fact she was recording.
"I was dehydrated."
We were both so very tired. "Which is why you ended up lounging in Miami while I ran yet another meeting solo. I stayed up until three a.m. doing the PowerPoint you'd forgotten."
"I ended up in the hospital."
"And missed the flight back to New York and yet another day of work. If you are dehydrated, drink water. It's not rocket science!"
I remembered this day clearly. Sleep-deprived from a red eye, I'd left Betsy in New York, begging her to prep for a meeting the following day. When I got back, the slides weren't ready. She'd gone home. I'd miss another night's sleep to finish them.
It was the perfect storm, and she'd caught it.
I leaned forward to downsize the screen. "2.7 million views?" She'd titled it "World's Worst Boss?!" There were lots of comments, many expletives, and a passionate, nine exclamation points in a row.
Bob dug a crust from his eye. "It's not something to be proud of."
My mind raced. How to spin this before he threw something out? I managed a casual shrug. "I'm in marketing. I can't help it."
"This makes us look so bad."
It was crunch time. There was no room for complaints or excuses. "Does it though? Does it? What I see is that we expect a certain professionalism and energy from our employees, a requirement that, pregnant or not, they perform to the best of their abilities." My delivery was very rough, but it was a message she needed to hear." He wasn't buying. I grabbed for a straw. "Isn't posting this on YouTube a violation of my privacy?"
"I don't know," Bob said wearily. "That's 2.7 million negative hits with MLJK's name attached."
My heart clenched. I needed a cigarette. Now. "Whatever happened to 'any publicity is good publicity'?"
He ignored my lame joke. "She's threatening to file suit. I checked with legal. We can tie her up in court, but the claim is legit."
I inhaled sharply, forgetting, in my growing panic, to exhale.
"Breathe, Kylie."
"S-s-suing us?" Great, now I was stuttering.
"You called her fat. She says you created an unhealthy work environment."
My jaw dropped. This was not the time to point out that, as a former chubette, I never, ever use the F-word. "The operative word here is work. I was running on vapors."
Bob got up and looked out the window at his fabulous view. "Stella, by the way, corroborates everything you've said." My eyebrows shot up in alarm. "Yes, I've talked to her. I've talked to a few people, but the point is that sooner or later we all have to deal with this. Pregnant women deserve…" He stared off into the silver buildings and cloudless sky. When I'd entered, the view had felt empowering. Now it was an invitation to jump. "Latitude. We are a family-friendly company."
I snickered bitterly. MLJK years were dog years. Most of the senior partners were divorced. "And what about women who aren't ever going to have children? We just put up and shut up?" I knew this sounded whiney, but I couldn't help myself. I felt like a tightrope walker studying the tiny figures below, waiting for me to fall. Then it struck me. I felt like this most of the time.
He gazed at me, his eyes weary. "Come on. You're what, not even thirty? You don't know that." Bob was still in his marriage of origin.
"Look at me Bob. My relationships have the longevity of a fruit fly. I have nothing left at the end of the day." I have nothing left right now.
"Maybe it's time to branch out."
Clearly he pitied Betsy. It was time to grab the controls. "I can fix this. I can smooth things out. Get my assistant her own assistant. At least until she's had it."
"Her baby is not an it," he snapped.
"Did I say 'it'?" I'd been talking so quickly. It? Good move Kylie.
"Yes," Bob said quietly, losing his starch. Crossing his arms he glanced at a framed photo: a gap-toothed, pig-tailed toddler on a swing, pushed by his beaming, very pregnant wife. "You're going to have to leave until this dies down."
For a second I felt nothing but a weight pressing on the top of my head, a dull ringing in my ears. "This isn't Survivor. You can't let random strangers on YouTube vote me off because I lost my temper."
"They're not. Lance is."
The CEO? I was in a tippy canoe, and by golly, there went my paddle.
I made a tiny bubble of an objection as I sank. "She wasn't doing her job."
"Effective immediately," he said. I knew what preceded those two words. Terminated.
This wasn't a break.
This was permanent.

Ellyn Oaksmith is an award-winning writer who began her career as a screenwriter in Los Angeles. Her first book, Adventures with Max and Louise, was published in 2012. Fifty Acts of Kindness is her third book. She's currently at work on her first YA novel, Chasing Nirvana. The best part of her work day is spent watching vintage YouTube footage of Nirvana concerts and calling it research.

Ellyn is part of the Girlfriends Book Club which has been featured in The New York Times and USA Today. She lives in Seattle with her family, a rescue dog and a rather rotund cat.
http://www.ellynoaksmith.com/
https://www.facebook.com/EllynOaksmith