Amaranthine: The Heart of Decompose


At the center of it all stands Dee, a man immortalized in legend as Decompose. An ongoing war between unicorns and dragons has led to the creation of a plague… a deadly infection Dee is the host for. Not quite human, but not a unicorn either, Dee and the plague form a symbiotic relationship, resulting in immortality of the undead kind.


Every ruling Empire has desired control of Decompose. Controlling the infection means control of the people. An intervention of an old rival, Santa, results in Dee going missing. When he resurfaces decades later, Dee has one goal: locate the mythical cure to his plague.


However, complications of the heart force Dee to decide whether he truly wants to find the cure and give up being Decompose.


Dee focused on the name, pulling strength from it. Jhon contained the cure. Dee had to live so he could find Jhon. The cure was his way to correct all the wrongs he had done.


Dee ripped at the flesh surrounding him and clawed his way to the surface. The guts of the creature spilled out onto the ground, and he fell with them. He coughed, spitting out bodily fluids of the creature that had eaten him.


Dee rolled onto his side and threw up. The acidic stomach bile had left him temporarily disabled. His hearing returned before his vision and he heard voices near him.


“That?” A boyish voice asked. “That’s what you call a great and powerful present?”


“Trust me.” Another male voice said. “Throw the net on him and all your wishes will come true.”


“You can treat him like one. He will be able to grant your every wish.” The older voice sounded familiar. Air rushed into Dee’s lungs, and his heart gave a painful beat. “Throw it over him now, before his strength returns.”


“Santa,” Dee managed to say. He gritted his newly mended teeth and gave a low growl. What did that man want now?


Dee’s vision returned in time for him to see a large, light- weight fishnet fall over his head and shoulders, covering his entire body. There was something claustrophobic about it. The more he struggled, the more of a mess he made of himself and the net.


“Stop moving around like that,” the boy said. Every muscle in Dee’s body stiffened. “Straighten the net out and get to your feet.” Dee moved as quickly as his wounded body would allow. His skin continued to burn from the acidic digestive juices still covering his flesh. The child before him didn’t look nearly as young as he’d expected. He was a teenager. And a dorky looking one at that, dressed in dark green pajamas with a cowlick on the back of his head.


“Show me a trick,” the boy said. Dee obediently raised his hand and created a tennis ball sized orb of fire. It hovered in mid- air a few inches from his hand.


“He can do whatever you want,” Santa told the boy. “He is yours. No one will miss him. They all think he is dead.”


Dee put the fire out and lowered his hand. Fear rose through his healing body as he realized Santa was right. Dee had just crawled his way out of a dragon’s belly. Everyone who knew him thought a giant winged lizard had digested him. Even if someone searched for his remains, they would likely find nothing awry with his missing body.


Santa leaned in close to Dee. “The boy is clever, Dee. He caught me in a trap. You wouldn’t want all the children in the universe to miss the joy that Santa brings, would you? Of course, you wouldn’t. Therefore, I bartered with him. I gave him you in exchange for my freedom. You understand, don’t you?”


“Well, let’s be honest here, Dee. Most of your life has been spent in exactly that manner. At least this time your owner only wants you for your power, not your plague. Consider it a blessing—besides you’ll still have my visit to look forward to every Christmas Eve.”


My plague. Dee tried not to cringe at the reminder.


“Can you teleport him directly to the shower? He’s disgusting. My mother will throw a fit if he brings all that goop into the house.”


“Then you’ll take him?” Santa asked, as though Dee were a puppy for sale at the pet store.


“I should have thought of this years ago,” Santa said.


“Santa, please,” Dee said. “I have to find Jhon before Emperor Emanuel does. He’s the only one who can cure the plague.”


“I’m sure Jhon will be fine without you, Dee.” 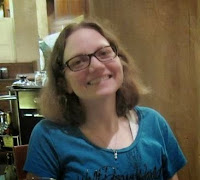 Nina Schluntz is a native to rural Nebraska. In her youth, she often wrote short stories to entertain her friends. Those ideas evolved into the novels she creates today.

Her husband continues to ensure her stories maintain a touch of realism as she delves in the science fiction and fantasy realm. And their kitty, a rescued Abyssinian, is always willing to stay up late to provide inspiration.

Visit her blog; mizner13.wordpress.com for information regarding previous and upcoming publications. She also posts book and movie reviews for a wide variety of genres.