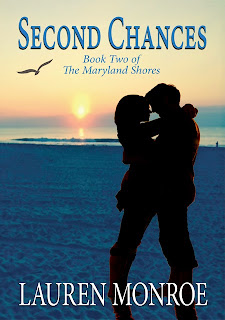 
FOR IMMEDIATE RELEASE
Maryland novelist chooses shore theme & football for women’s fiction series
What do you get when you combine water, sun, and sand with a novelist?
An escape from your own world, uplifting messages, bits of humor, and fun with a so-familiar regional football rivalry according to Eastern Shore novelist Lauren Monroe.
Lauren Monroe is the pen name for Loriann Oberlin, an established non- fiction author/therapist with two offices in Maryland—one Mid-Shore.
“Relaxing and recreating around the water is in my blood,” Ms. Monroe says. “A Pittsburgh native, I spent three seasons a year at Deep Creek Lake with boats and books in my own child- hood. I always wanted to live near the water myself, and so it’s natural to base my characters in that setting, with Second Chances: Book Two of The Maryland Shores series taking place on both sides of the Chesapeake Bay as well as in Ocean City.”
Asked why she selected the Pittsburgh-Baltimore football rivalry and whether true Ravens fans will enjoy the series, she remains steadfast. “I think it’s great to have team loyalty. When people find out I’m from the ’burgh, I get some dispensation, but my diehard Ravens-backing friends have taught me a lot about the history of losing their beloved Colts and the emotional impact that had. Baltimore needed a team.”
Both novels depict the lingo from each town as well as male friendship. Thus, Monroe writes her characters to razz each other as guys do over sports, dialect, and women. “The Steelers-Ravens rivalry exists, and you get a completely different perspective living out of state. You hear some trash talk on both sides,” she reports.
“While I don’t believe it’s necessary, it’s real, and I write real,” Monroe says. “My novels capture that, putting a fun spin on those dynamics. Ravens fans will applaud that Liz (and others) in Second Chances bleed purple! I think readers will also appreciate that the character struggles reflect life as we know it—love, loss, parenting, maintaining a career. I don’t like to write extreme wealth or privilege, and I aimed for an easy read, not a tome.”
Monroe weaves a few memories for residents transplanted from Pennsylvania to put a smile on those faces, even when she depicts historic Maryland weather events occurring in her 2003 timeline. “In Book One, I focused on post 9-11 tension and the DC sniper era as I wanted a tense backdrop,” she says. “Picking up the story lent itself to an historic snowstorm and a Chesapeake
hurricane. That the story ends in Ocean City, where plenty from surrounding states flock each summer should also give readers something in common with the characters.”
In Second Chances: Book Two, the heroine Liz is forced to restart her life when her errant husband walks out, leaving her to scramble for work hours as a social worker caring for others as well as two young children. That one of her cheerleading male friends—sporting rival team colors and suddenly single—adds sparks to that dimension.
Letting Go: Book One of The Maryland Shores combined nautical and medical themes as does Second Chances: Book Two that also depicts living on the scenic Eastern Shore. That’s something the author has done for much of the past decade.
“We started coming out to the shore part-time, but made the permanent move across the Bay Bridge in 2012,” the author reports. “Joining a neighborhood book club, a supportive eastern shore writing group, and serving on the Bay to Ocean Writers Conference planning committee restored a goal I had set years ago to craft fiction. I also independently publish this series after years of traditional publishing. This is definitely a challenging endeavor. I’m growing and learning every day, but I love it when readers tell me they did nothing else some days but read my novel!”
The novel Second Chances launches late May at a Maryland book festival and at a Memorial Day signing on the Eastern Shore, where Oberlin/Monroe now resides. It will then be available on Kindle, in paperback on Amazon and via other distribution channels at select stores. She lists stores carrying her titles on her social media periodically. Letting Go is currently on sale.
The author will also sign copies for gifts when contacted through www.laurenmonroenovels.com.
— 30 —
Second Chances: Book Two of The Maryland Shores by Lauren Monroe
$3.99 eBook on Kindle/ISBN: 978-0-9912822-2-7 $15.99 Paperback/291 pages/ISBN: 978-0-9912822-3-4 Shore Thing Publishing • www.facebook.com/lauren.monroe.novels Twitter: @LaurnMonroe • Pinterest: www.pinterest.com/novelistlaurenm • Author page on Goodreads
Posted by 3 Partners in Shopping at 12:13 AM