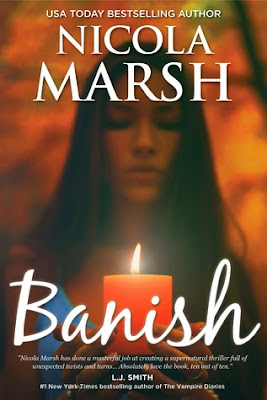 Summary from Goodreads:
Alyssa has one week to destroy her enemy, save her spirit... and save her soul.

After her ex-boyfriend commits suicide and her mum’s alcoholism sparks yet another psychotic episode, seventeen-year-old Alyssa Wood flees her small hometown of Broadwater and heads to New York City to stay with her bohemian aunt — a Wicca High Priestess.

Alyssa revels in the anonymity of a big city and her new life. Her grades climb, she has a new best friend, and a new guy: the sexy geek Ronan — a saxophone player who prefers jazz to pop.

But her newfound peace is soon shattered when she sees a dead body in one of Ronan’s music clips — and she’s the only one who can see it. Worse still, Alyssa recognises the body that has been murdered a week forward!

Alyssa doesn’t believe in the supernatural...despite her family’s Wicca background. So how will she overcome evil when it’s closer than she thinks?

I screwed up my nose and reluctantly flipped open the screen. “Ronan sends me music clips he makes.” My finger hovered over the play button. “Tonight he said he’d composed a song just for me. It’s amazing.”


“At the end of the song, the camera panned into another room and that’s when I saw...”


My voice trembled and Angie’s lips thinned. “Show me.”


I hit play and braced.


The haunting melody embraced me, so familiar now I’d heard it repeated so many times over the last ten minutes. As the final notes faded, I stared at the screen, wanting to look away but unable to. Would Angie see it? Would she convince me I wasn’t going crazy?


I couldn’t look at Angie, my disappointment acute.


She jabbed a finger at the keyboard. “Play it again.”


Wanting to hug her, I hit the button. Another eight times.


All the while hoping the gruesome scene was on some weird cyclical repeat.


No freaking idea what the hell was going on with me.

About the Author
USA TODAY bestselling author and multi-award winner Nicola Marsh writes flirty fiction with flair for adults and riveting, spooky stories for teens.
She has published 54 contemporary romances with Harlequin, Entangled Publishing and indie, and sold over 6 million copies worldwide. Her first mainstream romance BUSTED IN BOLLYWOOD was nominated for Romantic Book of the Year 2012. Her first indie romance, CRAZY LOVE, was a 2012 ARRA finalist.
Her YA urban fantasy SCION OF THE SUN won the 2014 National Readers’ Choice Award for Best Young Adult novel.
She’s also a Waldenbooks, Bookscan and Barnes & Noble bestseller, a 2013 RBY (Romantic Book of the Year) and National Readers’ Choice Award winner, and a multi-finalist for a number of awards including the Romantic Times Reviewers’ Choice Award, HOLT Medallion, Booksellers’ Best, Golden Quill, Laurel Wreath, More than Magic and has also won several CataRomance Reviewers’ Choice Awards.


A physiotherapist for thirteen years, she now adores writing full time, raising her two little heroes, sharing fine food with family and friends, and her favorite, curling up with a good book!

a Rafflecopter giveaway
Posted by 3 Partners in Shopping at 12:22 AM