The Keys of the Watchmen by Kathleen C. Perrin Blog Tour and Book Review 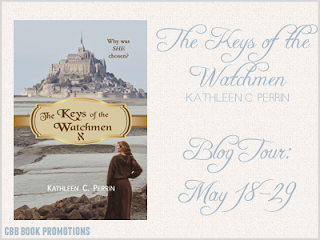 THE KEYS OF THE WATCHMEN

Katelyn Michaels plans on hating every moment of her visit to Mont Saint Michel with her father’s new French wife. Once there, she is confused when she experiences sensations of déjà vu and hears voices as she and her younger brother explore the medieval village and abbey.


When the oddly-dressed but alluring Nicolas slips Katelyn a strange medallion, she is whisked back through time with him to the 15th century where her Watchmen hosts tell her she is the only hope to save Mont Saint Michel from the invading English armies. Even worse, she learns those armies are led by a fallen angel intent on learning the mount’s closely-guarded secret.


Katelyn is torn by feelings of anger at being taken back in time, inadequacy at finding a modern solution for a medieval problem, and responsibility for the mount’s starving inhabitants. She is also perturbed by her surprising attraction to the ill-tempered Nicolas. Will she stay to learn why she was chosen by the Archangel Michael and find a way to save his mount?


Kathleen has lived in Utah, New York City, France, and for eight years in French Polynesia. She has worked professionally as a language and music teacher, translator, interpreter and writer. She has published several non-fiction articles, academic papers, and a religious history about Tahiti.


Traveling and learning about new countries and cultures is a passion for Kathleen, but her latest passion is sharing the mysteries of France through her fiction.


The Perrins have three children, and currently reside in Utah.

My review;
Anyone who has read any of my reviews knows that my favorite kind of book is a Time Travel novel. "The Keys of the Watchmen" by author Kathleen C. Perrin is a fantastic time travel story. I loved the storyline and I was hooked from the first page. Katelyn Michaels went on a trip to visit her father and his new wife. Katelyn and her brother are right in the middle when she is sent back in time, alone. Before it is too late she has to find out why she is the one that is supposed to fix everything. She has a ton of feelings going on and has to sort through all of these if she is going to help anyone. I give this book a 5/5. I was given this book for the purpose of a  review and all opinions are my own.