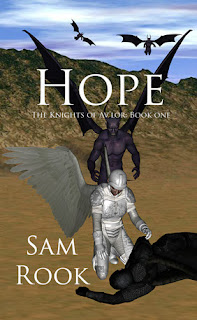 The winged knights—magically altered humans—are the only ones defending the portal from Av'lor to Earth. With defeat imminent, they find an unlikely source of hope in software engineer, Kathryn.

Kathryn doubts her life could get any worse after the death of her mother and daughter. She realizes her mistake after she arrives on Av'lor with only part of her house and hungry creatures looking for their next meal. Once the knights bring her under their protection, she discovers their angry commander is far from welcoming.

Sir Lanclor, Commander of the Knighthood, lives with the curse of betrayal. While the treachery occurred lifetimes before, few see past his guarded shell to the grim man beneath. Barely holding the Knighthood together, his grip tightens when Kathryn joins their ranks. Her stubbornness and surprising strength not only energizes the knights, but also makes Sir Lanclor question his self-imposed isolation.

With the approach of an invading army, Kathryn and Sir Lanclor must find a way to end centuries of war and save two worlds.


"They’ll be talking about this for months you know," Sir Lanclor said with amusement. "Lady Kathryn, the brave knight who annihilates Daemons and challenges the great Sir Lanclor."


Kathryn snorted. "Don’t flatter yourself. I just saw your table as the lesser of the evils."


"Oh please. I prefer your blunt honesty to their honey-coated insults any day. The only reason some of them don’t call me an undeserving Earthling anymore is because they now know I can annihilate them with one spell."


"Fear is a powerful thing." Sir Lanclor closed his mouth flap and gathered his tray.


If everyone feared her, she’d never have anyone. Kathryn piled her utensils upon her tray. "It’s also lonely as hell." She stood up and left the table without a backwards glance. Depositing her tray on the counter next to the trash can, she exited the meal room.


"Lady Kathryn, wait." She glanced back to see Sir Lanclor hurrying after her. He caught up to her in a few strides and fell in beside her. "That conversation didn’t end like I intended."


"Oh, really? What was your intention?" Kathryn regretted the bitterness in her voice.


Sir Lanclor sighed in frustration. "You surprised me. I usually have time to think before I speak."


"You think before you speak?" Kathryn exaggerated her look of surprise as she glanced his way and his eyebrow turned down in disapproval. She heard him growl deep in his throat before responding.


Sam Rook lives in Vermont with her husband and two children. Her passion for fantasy novels began in high school with her desire to write following shortly thereafter. Software engineer by day, fantasy author by night, she strives to give her readers a chance to enjoy worlds that transport them away from the stress of everyday life.