Bubba Done It
by Maggie Toussaint

A great story line with a cast of characters that keep you interested till the last page.
~Shelley’s Book Case​ 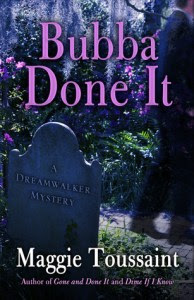 Bubba Done It (A Dreamwalker Mystery)

Amateur sleuth and dreamwalker Baxley Powell is called in on a stabbing case. She arrives in time to hear the dying man whisper, “Bubba done it.”
Four men named Bubba in Sinclair County, Georgia, have close ties to the victim, including her goofball brother-in-law, Bubba Powell.
She dreamwalks for answers, but the victim can’t talk to her, leaving Baxley to sleuth among the living. The suspects include a down-on-his-luck fisherman, a crack-head evangelist, a politically- connected investor, and her brother-in-law, the former sweetheart of the victim’s ex-wife.
The more Baxley digs, the more the Bubbas start to unravel. Worse, her brother-in-law’s definitely more than friendly with the victim’s ex-wife.
Between pet-sitting, landscaping, and dreamwalking, Baxley’s got her hands full solving this case. 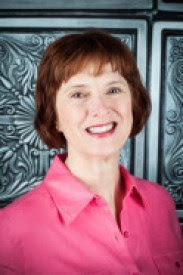 About This Author
From her youthful days of tree climbing and dreams of flying to her career days of pocket-protector geekiness as a toxicologist, Southern author Maggie Toussaint remains riveted by a good story. As a book aficionado, she put into practice what she’d learned and began penning novels.
Maggie is published in mystery and romantic suspense, with six titles in each genre. The third book in her Cleopatra Jones mystery series recently won the Silver Falchion Award, while her romances have won the National Readers’ Choice Award and the EPIC eBook Award for Romantic Suspense. She also writes science fiction under the pen name of Rigel Carson. More at www.maggietoussaint.com.


My review;
"Bubba Done It" is another book in  the series by Maggie Toussaint called "A Dreamwalker Mystery". I really liked this story. Baxley Powell can dreamwalk and talk to the dead.  She likes to solve mysteries and finds that this can help the police solve the crimes. The book was interesting and full of action and twists and turns. Whenever Baxley had a dreamwalking event she had a new vision and learned something about the murder of a man who as he was dying said, "Bubba Did It". Baxley wanted to solve the crime but there was more than one Bubba around so it was not going to be an easy job.
Posted by 3 Partners in Shopping at 12:05 AM