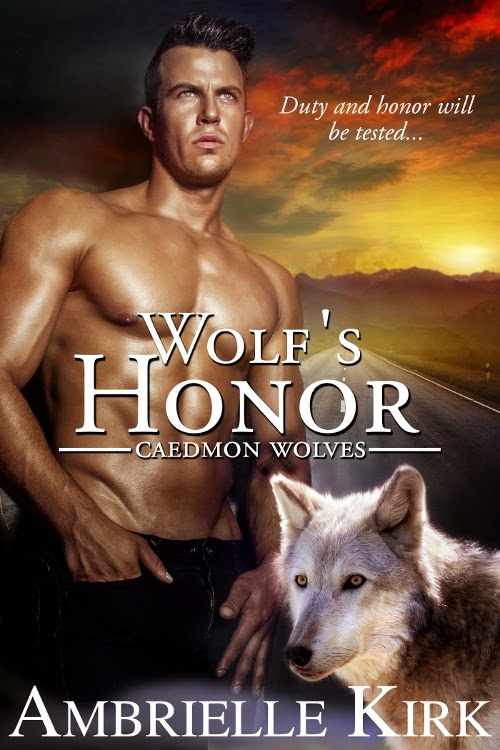 
Wolf shifter Connor Maxim is a law-abiding citizen. His motto: Keep the peace. Protect the Pack. His firm, Maxim Securities, was created for this purpose. His honor will be tested when he's called to deliver on his vows.


The homicide rate escalates to an all time high on Pack territory and all evidence points to two prevalent wolf packs: the Caedmon and the Arnou. The Feds give the leaders of both Packs an ultimatum and a three day deadline. They must find the source of the murders before the Feds intervene.


When a police raid goes awry, Connor's world collides with that of Antonia Trudeau's. Under the guise of a striking spitfire of a woman--who happens to be his mate--is also a criminal with a healthy rap sheet. He must decide if love is worth more than duty and honor.


Titles are meant to be read in order for greatest enjoyment, but can be read as standalones or out of order.


“Connor, what the heck is going on out there?” Maxim, Sr.’s gruff voice boomed throughout the small office. “Murdered remains of both men and women are showing up all over the country! My boss is all over my ass about handing over any leads.”


“What leads do you have?” Connor asked, raising his gaze to meet his dad’s and giving him a knowing.


“Most of the bodies were shifters. Both Caedmon and Arnou. If we can’t handle our clean-ups and messes, we’ll have the humans all up in our shit. I can’t hold them off any longer.”


“Dammit,” Connor clenched his fist on the desk.


A promise to keep his voice down had not been fulfilled and suddenly Connor realized that he shouldn’t have agreed to have this conversation here with his father. Closing time at Maxim Securities happened several hours ago, so there was no on left for the day. Even the cleaning crew had finished up the nightly rounds and left, but Connor remained behind after hours as always did night after night.


Still the matter was imperative and by the tone and urgency of his dad’s voice, they were running out of time before both of their covers were blown.


Connor rubbed the tension at the back of his neck, ground his teeth together and turned around to face his father. “What you’re saying doesn’t make any sense? The main perpetrator of the wolf strippings was executed months ago following the union of both Packs.”


Maxim, Sr. plopped down in the leather high-back chair in front of his desk. “Then if it’s not the witch, who could be behind this?”


“The witch had followers,” Connor said. “If this is the case, the situation is being handled. This is Pack business and not the humans’ concerns.”


Connor paused. There had been no known accounts of wolf shifters being stripped while in their real form. Last he had heard, that wasn’t possible. And unless gears had shifted after the witch’s death, the focus had always been on stripping the souls of wolves, not ending their lives.


“Like I said, I won’t be able to hold the Feds off from intervening for long. The incidents are becoming too frequent and news reporters and beginning to get suspicious and are quick to blow a story out of proportion.” Maxim, Sr. narrowed his gaze, his thick grey eyebrows coming together just above his nose. “We can’t risk discovery to the public. Not now. Have a meeting with the Caedmon Alpha.” He threw his hands up. “Fuck! Have a meeting with Tristan Arnou, for all I care. I don’t think either of the Alphas want human authorities up their alley at this point. Come to think of it, I don’t think they want the authorities up their alley at all.”


His father was more than thirty years his senior. He was the man who raised him and structured his lucrative and low-profile career as one of the few liaisons between the government and wolf shifter Packs. His purpose was simple: he had a duty to keep the peace and protect the Packs. It was his honor to ensure continuity of the shifter race like his direct ancestors before him, no matter where his allegiance rested.


“Look, Dad…” Connor finally sat down in the chair behind his desk. Maxim Sr. had been on edge the moment he barged through the doorway, which had sent Connor straight to attention since he hardly ever came out in person anymore. “Hold them off as long as you can. What we’re dealing with right now are two Alphas who are blood thirsty and will immediately kill anyone who crosses them. Both leaders have been burned by traitors and now is not the time to test their limits. Keep the human authorities at bay as long as you can.”


Maxim Sr. straightened in his chair. “You know how the Feds work. There’s a deadline. After three days, I won’t be able to convince them that the Pack leaders have everything under control any longer.”


Connor scrubbed his palm down his face. “Alpha Devin is away on pack business at the moment. It could be a few days before I can reach him.”


“You need to reach him now. What about his Council?”


“I’d much rather report and receive orders from to the Alpha himself, but if I must I’ll consult with his Second.” Connor linked and unlinked his fingers on the desktop. “We’ve earned this right to live in secrecy and within the rules of our society. Don’t make any rash decisions, Dad, until I give the word.”


Maxim Sr. emitted a growl and his irises flashed with specks of gold. “You’re patient, son, but I am not. In three days time, I need some answers.”

Visit Amber Ella on the web at www.amberellabooks.com