Wesley Perkins, successful and privileged advertising executive, makes an apparently impromptu purchase in a pawn shop. Almost immediately, he becomes immersed in a new reality. Old values evaporate. The line between good and evil seems inconsistent. Wesley is challenged to accept profound change, all the while juggling choices of enormous consequence.


Summertime, Book One, is the first portion of a story that delves into a surreal realm of metaphysical fantasy. Situational moralities are juxtaposed with omnipresent supernatural forces. Where the boundaries of our mundane lives intersect cosmic intents, events, and conspiracies, we can become overwhelmed by involuntary transformation. We look for surrogate sacrifices, and a home in Summertime.


Vanessa hated the basement. Even during the daylight hours, she ventured only reluctantly down the stair to do her laundry or occasionally retrieve something from storage. She knew there were rats in the basement. She often swept up their droppings, and it wasn’t unusual to hear something scraping against cardboard boxes as it ran along the base of the wall. Oddly enough, Vanessa seldom saw a rat. Infrequently, a sacrificial rat would appear- neck broken by the savage spring of Vanessa’s 17th Century style trap. Vanessa used to pretend she had caught “the” rat, and wouldn’t need to spend hundreds of dollars for an exterminator. Over the years, she had accepted an unhappy truce with her resident rodents. These days, she didn’t call an exterminator because there was always something that seemed a more important use of the money.


Vanessa found her flip flops and bathrobe, and headed for the stairway. Her open white bathrobe hung from her shoulders, contrasting with her dark skin but failing to provide any degree of modesty. She was reluctant to venture underground at night, but the weird idea that there might be some unexplained connection between Wesley Perkins and her probable grandfather, Judah Jones, couldn’t molder until daylight. She flipped the light switch at the top of the stairs. The loud snap of the switch initiated a series of electrical flashes, followed by the muffled explosion of a failing light globe. “Shit. One lightbulb in the whole damn basement, and it just burned out. Hell with it. I’m going down there anyway. I’ve got to, got to, got to figure this out.”


Vanessa tied her bathrobe across the front of her body, grabbed a fresh globe from a kitchen cabinet next to the stairway door, and stepped slowly into the blackness. A 90-degree bend at the top of the stairs prevented any usable amount of light from filtering in from the kitchen. Vanessa moved her feet slowly and deliberately between wooden treads, feeling her way in the darkness with heel and toe. A few steps from the bottom, she gasped at the sensation of something with tiny paws ran across her bare foot tops, dragging what felt like a coarse tail behind. She was sure she saw a pair of glowing eyes near the laundry sink. There was definitely a rustle among the storage boxes. Vanessa considered turning around and climbing back up the stairs. She wanted to act as though her visit to the basement could wait until morning, but she was compelled to conclude it could not. 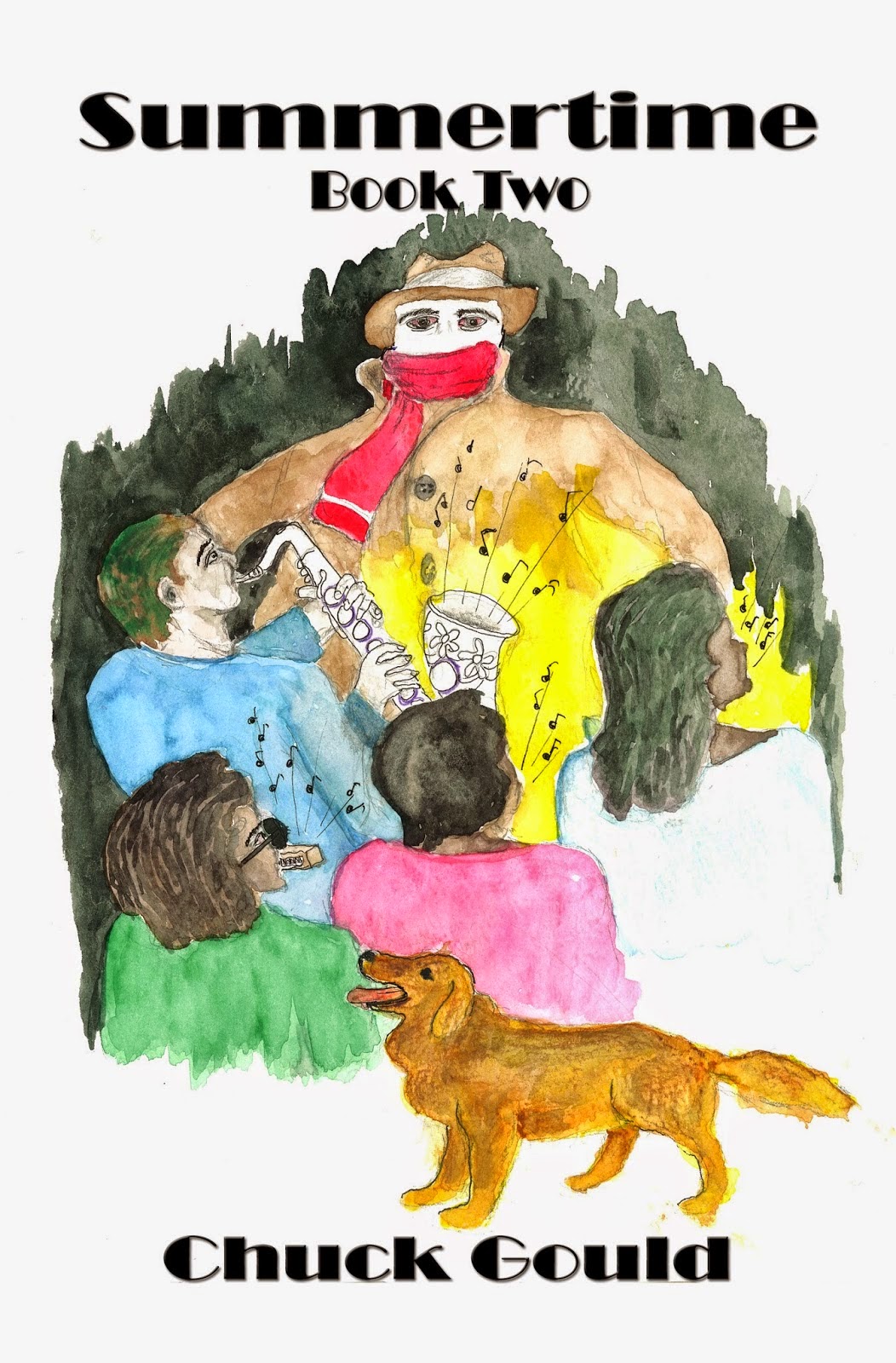 
The metaphysical fantasy continues in this sequel to Summertime, Book One. Wesley Perkins spirals ever deeper into a world he struggles to understand, inextricably linked to the tragic past of a long dead blues musician, Judah Jones. His closest allies are Jones’ granddaughters. Wesley must endure a variety of forces attempting to manipulate his fate, after being warned about the dangers presented by his own ego.


Meanwhile, in Iberia Parish Louisiana, pilgrims seek a new home in a spiritual enclave established by a charlatan radio preacher. The entire community falls victim to an ancient heresy. Are these disparate universes part of a common, supernatural conflict?


Ira lodged Memphis Rail and the Family Jones at the Fairmont Hotel on Nob Hill. Mary Towne retired to her room upon arrival. Vanessa and Redd Wilmott shared a room, as did Wesley Perkins and Rebekah.


Art Abbott and John Flood sought out the Tonga Room and Hurricane Bar. Back in the 1940’s, the Fairmont converted the hotel’s indoor swimming pool to a Tiki bar. The pool became a rectangular lagoon, with a floating stage. A ship’s mast, tropical huts, Polynesian sculptures, and the façade of an Asian house illuminate by paper lanterns instilled a dimly lit atmosphere. Faux thatched roofs hovered over tables around the perimeter of the pond.


A waitress approached their table.


Art chuckled. “You really want one of those candy ass drinks served in a phony coconut shell?”


“Make mine a Seagram’s and Seven, please, Miss,” said Art.


John rested his elbow on the table and his head on his fist. “Gonna be a big day tomorrow. Two shows, sold out. Who woulda thought? Even six months ago, we be lucky to sell four or five thousand seats.”


Art shook his head with a shiver. “Yeah, but are you really OK with this? I’m thinkin’ about that incident at Rain Crow. And a shitload of other stuff to boot. I heard you play the sax, once, a long time ago. You couldn’t get a goddam note out of that Wesley Perkins’ horn. What’s up with that?”


“Hell, I don’t know exactly. Seems spooky as shit, if you ask me. For now, I’ve just decided to ride along, ‘cause the money’s gonna be really good.”


“Money? Holy crap man, is all of this reduced to bein’ about money?”


“Well, no. But money’s a big part of it,” said John. “Was a time it was mostly about love. Hell, I’d a paid to drum for The Rail when we first started out. Now days, I’m mostly old, tired, worn out, and ready to give it up and go home.”


Art was ready to change the subject. “Check out that floatin’ stage.”


“Yeah, so what about it, other than it’s pretty small.”


“Ever think there’s this invisible line?”


John shifted to the opposite elbow. “Huh? I don’t follow you, really.”


“Like there’s this invisible line between where we are and where everybody else is. It’s sort of the edge of the stage, if you know what I mean.”


“Oh, hell yeah. Most of the folks buyin’ tickets think that there’s some magical divide. Like we never have to take a piss halfway through a set. Like we ain’t put in fifty hours of rehearsal and made a hundred mistakes for every sixty seconds we have out shit together during a concert. Hell yeah, I get that.”


“So, that floatin’ stage just makes the point more directly. Sort of like there’s this middle ages moat or something.”


The waitress returned with the drinks. “Are you gentlemen staying here at the hotel? If so, we’d be pleased to start a tab and bill it to your room.”


A young woman passed their table. She stopped abruptly, and looked deliberately at the two musicians. She flashed a slow smile of recognition, coupled with a slight nod, before she waved very slightly and continued on her way. Art and John watched her hips shift back and forth beneath a short, tight skirt.


Art sipped his drink. “You see the posters?” 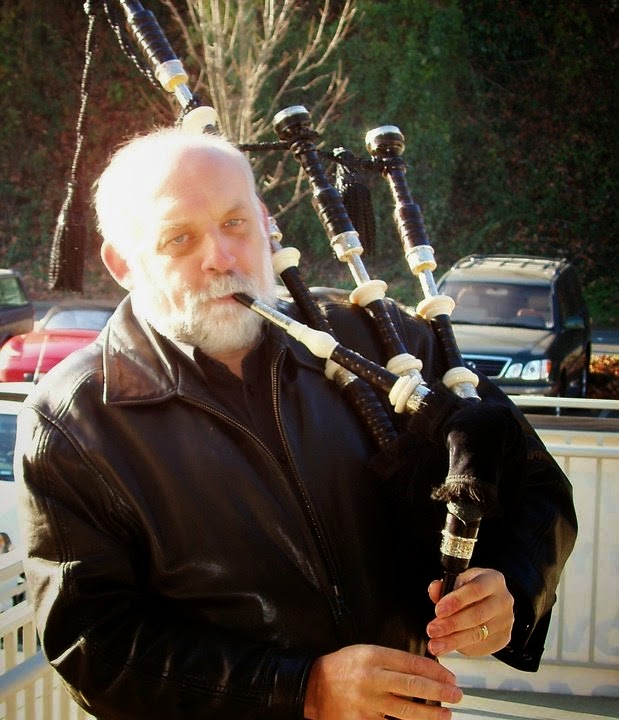 
Seattle native Chuck Gould is a writer and musician.


Formerly editor of Nor’westing Magazine and editor emeritus of Pacific Nor’West Boating, he has written over 1,000 articles for recreational boating magazines.


Chuck plays a variety of keyboard instruments, and enjoys the “exercise in humility” attempting to master the great highland bagpipe.