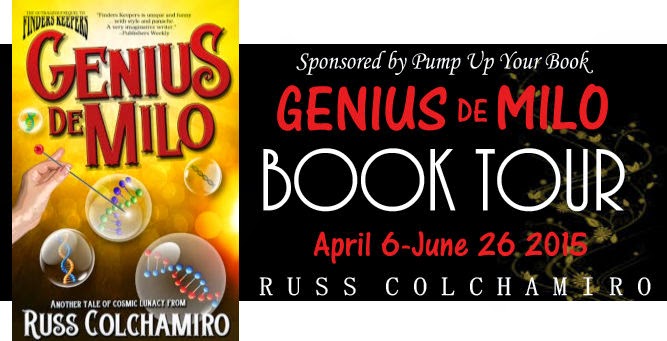 
Best pals Jason Medley and Theo Barnes barely survived a backpacking trip through Europe and New Zealand that — thanks to a jar of Cosmic Building Material they found — almost wiped out the galaxy. But just as they envision a future without any more cosmic lunacy:


The Earth has started fluxing in and out of existence, Theo's twin girls are teleporting, and Jason can't tell which version of his life is real.

All because of Milo, the Universe's ultimate gremlin.

Joined by the mysterious Jamie — a down-and-out hotel clerk from Eternity — Jason and Theo reunite on a frantic, cross-country chase across America, praying they can retrieve that jar, circumvent Milo, and save the Earth from irrevocable disaster.

In author Russ Colchamiro’s uproarious sequel to Finders Keepers, he finally confirms what we've long suspected — that there’s no galactic Milo quite like a Genius de Milo.

Jason’s smile dropped away, replaced with a silent, open-mouthed slug of resignation, that whatever was happening was authentic, and unfolding in real time.


In a shared-brain moment Jason and Theo slowly panned in Jamie’s direction until finally she felt their accusatorial eyes lock on her. And though neither of them spoke, the imputation of blame came through with perfect enunciation: What did you do? What’s coming?


But what could she say? Which cluster of words could encapsulate both the scope and nuance of their predicament? Jamie could offer a pretty good guess as to why their immediate surroundings morphed before their very eyes—it had to be Brigsby-related, didn’t it?—but when it came to the what, she was equally mystified.


So all she could do was stand there. She blinked a few times. Then a few times more. The night went bracingly still, as if every fractal of sound had been drained from the Universe. The three of them held in place, petrified, as if the incredible forces converging upon them were seemingly just to be unleashed. Which, of course, they were.


Russ Colchamiro is the author of the rollicking space adventure Crossline, the hilarious scifi backpacking comedy Finders Keepers, and the outrageous sequel, Genius de Milo, all with Crazy 8 Press.


Russ lives in West Orange, NJ, with his wife, two children, and crazy dog, Simon, who may in fact be an alien himself. Russ is now at work on the final book in the Finders Keepers trilogy.


As a matter of full disclosure, readers should not be surprised if Russ spontaneously teleports in a blast of white light followed by screaming fluorescent color and the feeling of being sucked through a tornado. It’s just how he gets around — windier than the bus, for sure, but much quicker.