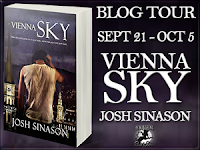 When the world pushes you to your limits, sometimes your limits push back.


Archie thought making it out of New Jersey was a long shot. That was before an Eastern European mobster wanted to crack open his head to get the secrets inside, put there by a dead spy he barely knew.


The secrets buried in his head will take Archie across the world and into the arms of Rebecca, the girl recruited as the spy’s last asset. She has her own secrets and her own demons buried in her head. Together they learn what they are capable of in a life and death battle for love and justice.


Josh Sinason is a freelance writer working in the Northern Illinois area. His work has appeared as part of Chicago DIY Film Magazine. His past work includes all ages short story romances, A Linger in the Echo and Monaco Dawn.