Tessa McCaide has had it up to here with supernaturals. Luciana may have failed to steal Tessa’s magic, but she’s just getting started on her crusade for magical domination. If her demonic summoning isn’t stopped, it could mean the end of everything.

Tessa’s allies, including her mate Dastien, are ready to fight, but they’re no match for Luciana’s power. A little help (and ancient Inca mojo) from Tessa’s cousin, Claudia, may give the side of good a chance if she can make it home in time, but stopping the war is no longer an option.

When witches and wolves fight, no one wins. Only time will tell who will still be standing after the last spell is cast. 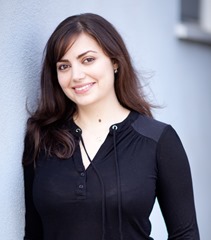 Aileen Erin is half-Irish, half-Mexican, and 100% nerd—from Star Wars (prequels don’t count) to Star Trek (TNG FTW), she reads Quenya and some Sindarin, and has a severe fascination with the supernatural. Aileen has a BS in Radio-TV-Film from the University of Texas at Austin, and an MFA in Writing Popular Fiction from Seton Hill University. She lives with her husband in Los Angeles, and spends her days doing her favorite things: reading books, creating worlds, and kicking ass.