One Great Love , One Great Adventure, One Great Year by Tamara Veitch and Rene DeFazio One Great Book Blitz and Giveaway 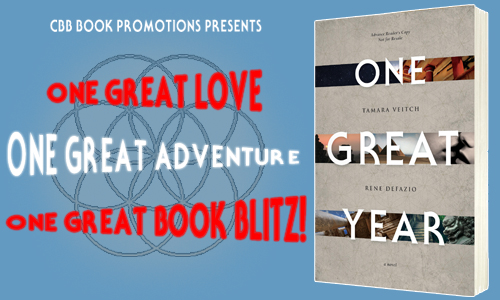 Welcome to the Book Blitz for One Great Year by Tamara Veitch and Rene DeFazio! One Great Year is a metaphysical fantasy that is an epic, thought-provoking tale of reincarnation, love, and the struggle of good against evil.

Magic happens. Sometimes as writers we are amazed where the story takes us and the lessons we learn along the way. As we researched for our novel we came across an ancient mystery that evoked such wonder in us that we asked ourselves “why isn’t the whole world talking about this?”

We were fascinated by what is known as The Great Year Cycle; a naturally occurring phenomenon written about in thirty-oneancient cultures from China to Mexico. Plato called it the Great Year, the Mayan’s called it the Grand Cycle and in India it has been known as the Yugas for more than five thousand years.

It is common knowledge that the spin of the Earth gives us night and day and the rotation of the earth around the Sun gives us the four seasons, but there is more! There is a ‘wobble’ in the rotation that takes approximately 26, 000 years, composing one Great Year. Like the seasons in a year, the Great Year is divided in to four phases: the Golden Age, Silver Age, Bronze Age and Iron Age. These periods are characterized by a rise and fall in human consciousness. In the Golden Age human consciousness experiences full enlightenment and then declines through the ages losing consciousness and causing destruction, war and disconnect.

We weave these secrets through the extraordinary lifetimes of our characters and consider: what if reincarnation is real? Marcus has past life memory and his soul mate Theron does not. As the Dark Age climaxes our hero leads the way in ensuring the ascension toward the Golden Age but he is not alone. Hisarch enemy Helghul and the other Adversaries have devastating plans for the world and are determined to expand the darkness, fear and doubt indefinitely. One Great Year makes a quantum leap, weaving ancient wisdom, modern discoveries and an alternative world history together creating a dynamic novel series.

One Great Year is an award winning fantasy novel that has been optioned for Hollywood development. The second book in The Great Year Series is due for release in early 2016. We want to thank all of our readers for their amazing posts, emails, reviews and support. We cannot wait to share Book II in The Great Year Series. If you haven’t read One Great Year yet, don’t wait! People keep telling us “You will read it when you are ready.” Are you ready? 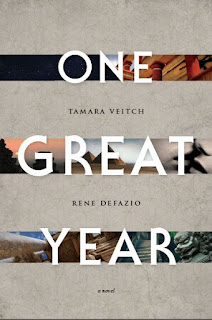 About the Book:
An epic, thought-provoking tale of reincarnation, love, and the struggle of good against evil.

As the world descends from a Golden Age into darkness and brutality, Marcus has been reincarnated an exhausting number of times. Selected to become an Emissary, it is his duty to protect the ancient secrets. His adventure is heightened because he secretly consumes a serum that allows him to have memory from one lifetime to the next. In doing so, he sets himself up for thousands of years of torment, loneliness, and searching.

Desperate to never forget his soulmate, Theron, and never sure if he was truly meant to be an Emissary, Marcus struggles through lifetimes to overcome his cruel and powerful nemesis, Helghul.

Fusing the adventure of Indiana Jones with the introspection and wisdom of Eckhart Tolle, One Great Year takes readers on an epic journey through history, following characters who are born and reborn as they struggle to triumph over evil. 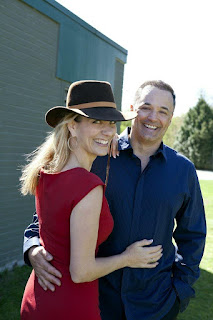 What happens when two passionate writer-artists fall in love and decide to make an uncommon life together? The award-winning novel One Great Year and its forthcoming sequels are just a few of the awesome possibilities!

Born and raised in the Vancouver area, Rene DeFazio is an actor, screenwriter and producer with numerous film and television roles to his credit, as well as countless commercials and print ads. After spending many years backpacking and filming, Rene drew upon an abundance of unusual and exciting experiences to create One Great Year. His tireless research and firsthand knowledge of exotic locations, customs, sights and smells helped to bring this epic story to life. Rene was awarded an “Empowered Writers Award” at the 2014 World International Peace festival in Vancouver.

Tamara Veitch was also awarded an “Empowered Writers Award” at the 2014 World International Peace festival in Vancouver. Since an early age Tamara knew that she was a writer. She studied English and General Arts at Simon Fraser University and has had articles published in Guided Synergy Magazine, Awareness Magazine (Southern California), and Mosaic Magazine. Tamara’s first published novel One Great Year was written in collaboration with her husband Rene DeFazio, and received excellent reviews. They are currently writing and researching the next instalment in The Great Year Series. Tamara is an experienced mural artist, teacher and public speaker and currently teaches creative writing to children ages 8-14 in her local community as well as touring and presenting the groundbreaking research and discoveries behind her novels.

The authors are currently writing the second and third books in the One Great Year Series and hope for the sequel to be released early 2016.