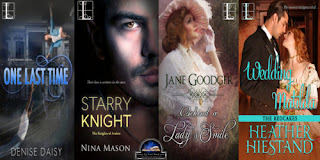 One Last Time, Starry Knight, Behind a Lady’s Smile and Wedding Matilda

When it comes to love, time is all they need…


Averie is terrified of anything remotely scary, but when she finds herself short of cash, she has no choice but to work on the catering staff at the creepy historic Faulkner mansion. The Faulkner Plantation was the site of a bloody massacre in the 1800s, and the event is an attempt to change its reputation. There’s just one catch: the host has more in store than dinner. Soon Avery, along with a handsome guest named Quillan, is transported—back in time…


It’s one month before the massacre and Averie and Quillan must find the courage to do more than survive. Together, they must uncover the truth about the Faulkner family and try and stop the murders. But as Averie and Quillan grow closer, the stakes are higher than they expected. Will they be able to put their feelings aside to change the past—and find life, and love, in the place Averie fears the most? 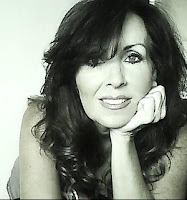 Born and raised in Tennessee, Denise Daisy sets her stories in the Deep South. In addition to writing, Denise enjoys directing for the theater, and has brought to the stage many wonderful stories, from The Legend of Pocahontas to Great American Tall Tales. To Denise, there is nothing more thrilling than bringing characters to life, whether on stage, behind the camera, or in the pages of her books. In her free time, she enjoys spending time with her four daughters, watching fireflies in the evenings, dreaming up her next story, and inspiring others.


British aristocrat Vanessa Bentley has beauty, fame, and fortune, but she gets no respect for her decision to become a paranormal investigator. Determined to prove the naysayers wrong, Vanessa ventures to the misty moors of Caithness, Scotland. There stands the immense Castle Barrogill, where a vampire is rumored to be stalking the dungeons—a vampire Vanessa is determined to find. She’ll just have to get past the resident shape-shifter…


Callum Lyon is the gorgeous reclusive astrologer and faery knight who guards the castle. For free-spirited Vanessa, seducing him proves to be easy. After all, he was once a breeding drone to a Queen. But astrologically, their differences are harder to overcome. Will Vanessa’s mission—and Callum’s secrets—be more than their burgeoning love can take? Or will flesh—and blood—win over the ghosts that haunt them both? ….

Nina Mason is a hopeful romantic with strong affinities for history, mythology, and the metaphysical. She strives to write the same kind of books she loves to read: those that entertain, edify, educate, and enlighten. When not writing, Nina works as a communications consultant, doll maker, and home stager. Born and raised in Southern California, she now lives in Woodstock, Georgia, with her husband, teenage daughter, two rescue cats, and a Westie named Robert. Visit her website at ninamasonauthor.com, find her on Facebook, or follow her on Twitter @ninamasonauthor.


Genny Hayes could charm a bear away from a pot of honey. But raised in the forests of Yosemite, she’s met precious few men to practice her smiles upon. Until a marvelously handsome photographer appears in her little corner of the wilderness and she convinces him to take her clear across the country and over the seas to England, where she has a titled grandmother and grandfather waiting to claim her. On their whirlwind journey, she’ll have the chance to bedazzle and befuddle store clerks and train robbers, society matrons and big city reporters, maids and madams, but the one man she most wants to beguile seems determined to play the gentleman and leave her untouched. Until love steps in and knocks them both head over heels…


Praise for the novels of Jane Goodger

Jane Goodger lives in Rhode Island with her husband and three children. Jane, a former journalist, has written seven historical romances. When she isn’t writing, she’s reading, walking, playing with her kids, or anything else completely unrelated to cleaning a house.


Sugared violets, buttercream…but he craves her kiss most of all…


Orphaned as a boy, Ewan Hales is proud to make his living as secretary to the manager at Redcake’s Tea Shop. But the startling news that he’s heir to the Earl of Fitzwalter changes everything. While tendering his resignation to lovely Matilda Redcake, however, Ewan is struck by her spirit, the luscious bow of her lips—and a realization. Matilda might not marry a working man—but will she wed a future nobleman?


“One Taste of Scandal is a delicious, multi-layered Victorian treat.” –Gina Robinson, author of The Last Honest Seamstress and the Agent Ex series


Heather Hiestand was born in Illinois but her family migrated west before she started school. Since then she has claimed Washington State as home, except for a few years in California. She wrote her first story at age seven and went on to major in creative writing at the University of Washington. Her first published fiction was a mystery short story, but since then it has been all about the many flavors of romance. Heather’s first published romance short story was set in the Victorian period and she continues to return, fascinated by the rapid changes of the nineteenth century. The author of many novels, novellas and short stories, she makes her home in a small town with her husband and son and supposedly works out of her tiny office, though she mostly writes in her easy chair in the living room.


One Last Time Reviewed at 3 Partners in Shopping


Wedding Matilda Reviewed at One Book Shy of a Full Shelf


Starry Knight Reviewed at One Book Shy of a Full Shelf


Starry Knight Reviewed at Taking it One Book at a Time