Thanks for inviting me to the Urban Fantasy Blog Hop. I write both paranormal romance and urban fantasy that are set in contemporary and realistic settings. Most of the time, there is an extensive historical component, though it is not historical fiction per se. My urban fantasy series, Boulevard of Bad Spells and Broken Dreams is still seeking a good home, but excerpts are featured in many of the Ten Tales anthologies. The Ultimate Test is part of the Toil, Trouble and Temptation anthology from Mocha Memoirs Press. Both are based on my experiences working in parts of New York City such as The Bronx, which was devastated by arson during the 1970s and Harlem and Washington Heights, the epicenter of the crack and HIV epidemics in the 1980s.  Check out my website for excerpts from Bites: Ten Tales of Vampires, Beltane: Ten Tales of Witchcraft, and Seers: Ten Tales of Clairvoyance.  http://www.caroleannmoleti.com/boulevard-of-bad-spells-and-broken-dreams/ 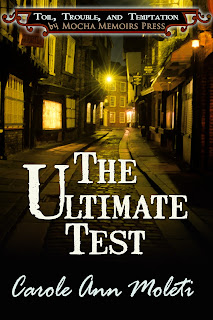 Here is an excerpt from The Ultimate Test, a very dark urban fantasy short story from Mocha Memoirs Press.

Aramis Sauros is having some difficulty adjusting to the restrictions imposed by her third life sentence....

Sirens blared. Ambulances pulled into bays outside the ER. Red strobes reflected off car windshields. Pale orange haze diffused between tall buildings.
Area residents descended tenement stairs to the sidewalks hoping to catch a breeze and dodge bullets from drive-by shooters out for a night of target practice.
Streetlights blinked on as dusk overtook the streets.
The signal at the corner of 165th and Riverside Drive flashed 'Walk'. Aramis crossed, and a bright yellow Hummer blew through the red light, swerved to avoid her, and kept going.
Her tenuous control snapped like an overstretched rubber band. "The size of that car must compensate for the size of your prick." She flicked her hand.
The Hummer skidded, screeched, and wrapped itself sideways around a utility pole like a giant banana. A tire blew as loud as a gunshot. Glass shattered and sprayed the street like bullets. The horn blared.
Aramis peered into the twisted wreck at the unconscious man covered in blood and airbag dust. She checked his neck for a pulse. “You’ll think twice before doing that again.”
An ambulance and police car arrived. Four men in uniform dashed across Riverside and quickened her already racing heartbeat. Calm yourself. They're mundanes. "He's alive. Ran a red light and almost hit me. Then he crashed into the pole."
"Step away from the car. We've got everything under control, sweetheart." The ambulance attendant jostled past her.
Aramis gestured downward like she was swatting a mosquito. Dangling debris flew off the ruined pole like missiles.
She suppressed a smile as the EMT dove for cover. "Next time, secure the scene before you rush in. Didn't they teach you that in school, sweetheart?"
She left them to clean up the mess.

I'd love to answer your questions or hear your thoughts. I'll give away one copy of The Ultimate Test for every five responses posted during the Blog Hop (using random.org).

Carole Ann Moleti is a nurse-midwife in New York City, thus explaining her fascination with paranormal and urban fantasy that infuses everything she writes. The Widow's Walk, a Cape Cod paranormal romance is her newest fiction. Excerpts from her urban fantasy novels have appeared in several of the Ten Tales anthologies. Segments of Carole's memoirs, Someday I'm Going to Write a Book: Diary of an Urban Missionary and Karma, Kickbacks, and Kids range from the sweet and inspirational in This Path, A Quilt of Holidays and the Shifts Anthology to the edgy and irreverent in Not Your Mother's Book: On Being a Woman and On Parenting.


Dozens of Prizes. Visit the participating blogs (shown below) to comment for your contest entries.


If the Links to the Fall into Reading Posts do not appear below, please visit here for more featured authors: http://wp.me/p5p8oj-1qf