Quest of a Scottish Warrior 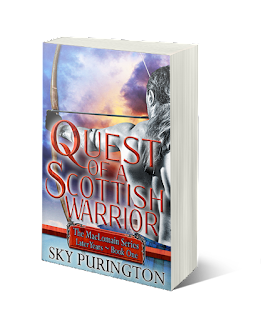 Historian and ancestry website owner, Cassie first became interested in her long lost Broun clan when she realized life was about to change forever. Faced with possible blindness, she seeks out her Scottish bloodline only to discover there is so much more to it than she could have anticipated. Not only will she find answers to her questions but a doorway into the distant past via a Claddagh ring.


Betrothed since birth to a lass he has never met, Chieftain Logan MacLomain thought the unending tie between his clan and the Brouns was long past. Never was he more wrong. When Cassie appears in a skirmish on the border of his clan’s land, all his noble intentions are put to the test. To desire her is wrong but still he seeks her out every chance he gets. Just a glimpse of her passing smile brightens the honorable yet lonely path he must see through.


Everything changes for Cassie and Logan the day war ravages a nearby village and a young king’s fate is put at risk. Scotland’s future hangs in the balance as denied love blossoms and four MacLomain warriors band together to save all that might soon be lost. Set to avenge the harm done, Logan embarks on a quest with Cassie that will take them both down a road fraught with risk, heartache and the beginning of an end they never saw coming.


Cassie nodded and as they’d done the past couple of nights, they settled into comfortable conversation. She was a pleasure to chat with. Though humble, she possessed a sharp wit. He suspected had she pursued any of her college majors, she would have excelled.


Yet the more he got to know her the more he sensed she lived her life a certain way…as if she knew its outcome already. Almost like someone planning to move to another country and preparing themselves for a different language and customs. Eventually, he intended to find out exactly what she was getting ready for. Whatever it was, it had her purposely changing subjects on a somewhat regular basis.


As he figured she would, Cassie eventually said, “Why are we eating separately from everyone tonight?”


Though tempted to say it was unintentional, he would be lying. The truth was he wanted her all to himself. “‘Twas a trying experience earlier. I thought you might want some privacy to relax.”


She arched her brow and offered a lopsided grin. “Yet you’re here.”


“Well, you cannae be alone in these woods, lass.” He polished off his meat and leaned back on his hands so that his shoulder was almost against hers. Voice lowered, he said, “And I’ll admit to wanting to spend some time alone with you. ‘Tis a luxury I rarely get.”


“Ah.” This time he didn’t have to touch her to enjoy her becoming blush. His eyes dropped to her mouth when she licked her lips. He had never wanted to taste a lass so much in his life. When she cleared her throat, his eyes slowly returned to hers.


“You should probably stop looking at me like that,” she said.


“Aye,” he murmured, caught by how the firelight reflecting off the shrubbery behind her seemed to magnify the pale green in her eyes. Unable to stop himself, he brushed his thumb down her delicate jawline, eager for far more contact. “May I kiss you, lass.”


“Kiss you.” He ran the pad of his thumb over her lower lip and leaned even closer. “I’ve wanted to do it since I pulled you onto my horse that first day.”


“Oh,” she whispered, not shying away.


Wrapping his hand in her hair, he didn’t kiss her right away but brought his lips close to her ear and murmured, “I’ve never seen such a bonnie lass.” He flicked his tongue beneath her dainty earlobe, relishing her quiver. “I’ve never wanted to touch and taste a lass so much that I cannae think straight.”


“Oh,” she whispered again, her head tilting to give him more access. God, she tasted warm and sweet and so bloody soft. He gently peppered kisses along her jaw, desperate to reach her lips but equally eager to sample everything along the way. Sharp arousal speared him when her breath hitched and she squeezed her thighs together. Hell, he had known the lass less than a week and he’d already imagined a hundred different ways he wanted to make love to her.


At last, his lips hovered over hers, savoring the heat of her breath, the ravenous anticipation before he finally…


“Och, m’laird, ye should have gotten to that sooner,” Machara quipped as she came around the corner.


Cassie pulled back sharply and Logan scowled as he redirected his attention to his intrusive cousin. “What is it?”

Sky Purington is the best-selling author of seventeen novels and several novellas. A New Englander born and bred, Sky was raised hearing stories of folklore, myth and legend. When combined with a love for nature, romance and time-travel, elements from the stories of her youth found release in her books.


Purington loves to hear from readers and can be contacted at Sky@SkyPurington.com. Interested in keeping up with Sky's latest news and releases? V