“… from out of the fire, would rise a new order, like the legend of the phoenix.


There would emerge a new world, a new super economy…” 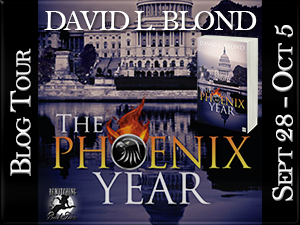 So starts a sequence of events destined to rock world economies to their very core. On the 50th anniversary of their induction into the Society of the Phoenix, a group of billionaires is about to change the world dramatically, with devastating effect.


Overseen by the reclusive Heinrich Von Kleise, the Society has hatched an audacious plan to subvert world economies, by using and abusing some of the world’s wealthiest businessmen and their families; in some cases, holding them literally to ransom, or worse.


Michael Ross, an economic advisor to the US President, Ben Masters, a disgraced property tycoon, Natalya Avramowitz, a Russian economist and spy, and “Kim” a CIA Agent, find themselves at the center of this plot, involving inside trading, sex slavery, and political corruption.


As the world careens towards financial Armageddon, can Michael, Natalya and Kim prevent global disintegration, or are the world’s financial institutions fated to implode?


The Phoenix Year by David L. Blond is a gripping novel, encompassing many of the financial crises that have hit the headlines in the past decade. The author has skillfully woven these together to create an action-packed conspiracy thriller.


Dr. David L. Blond works as a private economic consultant specializing in quantitative analysis of economic data. He began his career working for the United Nations in Geneva, Switzerland. During the period of 1978 – 1985, he was a Senior Economist in the Office of the Secretary of Defense in Washington, and after leaving that position worked for various major global economic forecasting and consulting firms in senior positions. He lives in Santa Fe, New Mexico.