Welcome to my tour stop for Skinshifter, the first in the Sylvan Cycle series by Alycia Christine. This is a high fantasy novel and the tour runs September 28 - October 9 with reviews, author interviews, guest posts and excerpts. Check out the tour page for the full schedule.


Skinshifters are a curse. The Asheken deadwalkers proved that fact when they used skinshifters to spy against the Sylvan races during the Second War of Ages. Now, after three centuries of peace, the deadwalkers have found a secret way back onto the Sylvan Continent and this time they seek not just to conquer their enemies, but to enslave them body and soul. When the Feliconas Clan suffers the deadwalkers’ first raid, one werecat—a skinshifter who has concealed her abilities—survives the massacre. Even as Katja struggles with her grief and guilt over her murdered kin, she must unite with other Sylvan refugees to defeat the deadwalkers before they can butcher and defile the other races. But can this skinshifter trust her newfound allies or will their secrets prove even more treacherous than her own?

Katja felt bright blades of green grass whipping wet past her furry flanks as she sprinted through their midst. The sun overhead was bright with warmth emanating through the thin clouds encircling its edge. She sniffed the rich air. It was alive with scents of salty sea, silky sand, glossy grass, singing sea birds, fresh fruits, and seedling sap. She looked over the escarpment toward the sea. There was a storm closing fast over its boiling waters. The wind howled and shrieked as it bore bulging black clouds weeping angrily within its clutches. She ran for cover under a tree and flinched back as a bolt of white fire singed a barrier at her feet. The tree was struck to pieces by the lightning’s blow and her only other choice was to dive for cover in an abandoned badger burrow.

She lunged toward its safely just as the sky’s white wrath attacked again and found herself in a small cave with intricate symbols carved in a circle around its walls. As she watched, the symbols began to glow with the same fire that she had stepped through upon her entrance to Crown Canyon. The symbols lifted themselves off the stone walls and began to spin in the air around her, growing brighter and moving faster until they formed a solid ring with her as their center.

Suddenly the ground beneath her shook and an altar sprouted under her paws. A smooth green emerald blossomed in its center. She picked up the stone and held it close as the altar melted back into the floor and a voice called in the shadows before her.

“This is your future.”

She saw herself reflected in the stone’s silky surface, not as she was, but with a human’s head attached to her werecat body, a segmented black tail curving up from her backside, and a terrible fury haunting her glowing green eyes. The dream’s image faded away to be replaced with the likeness of a powerfully-built werewolf with azure-emerald eyes, standing fully erect on his back paws, with a huge double-bladed war axe covered in ancient runes held ready in his furry forepaws.

Next she knelt in a dark castle corridor with grand buttresses looming over her. A red carpet marked a path to a closed door. At her touch, the door creaked open to reveal a red carpeted room beyond with a full-length mirror standing in its ancient iron frame. Someone was inside the room with the mirror, but the doorframe blocked the being from her view.

“This is her past,” called the voice.

For a moment the mirror reflect only blackness, then it seemed to be a window. Through its surface she spied a midnight storm breaking over a castle by the sea. She felt herself being sucked into the scene as a bolt of lightning struck a section of the castle’s battlements. Two horses bearing cloaked riders galloped wildly through the castle’s war-torn gates and out onto the castle clearing toward the sanctuary of the forest far in front of them.

Arrows arced from the unscathed section of battlements and rained down upon the racing fugitives. Three arrows struck one rider—a valet wearing the old royal Tyglesean coat of arms—and sent him tumbling to his death as the other rider wailed in anguish. The survivor’s hood snapped back in a gust of wind and Katja spied a human female who resembled Lauraisha in all features save nose shape, hair color, and eye hue.

“Arlis!” the female screamed as she escaped with both horses into the sheltering edge of trees.

“Time grows short!” the dream-voice called. “Come quickly before all is lost…”
*
Katja gasped awake. She wiped cold sweat from her brow and sensed the human across the lake do the same. Together they stared unseeing at their surroundings as the last remnant of dream faded from their shared vision. Their minds’ magical bond lasted only a moment after consciousness, and then it was as insubstantial as the mournful wind wailing just outside the werecat’s new den.
About the Author: 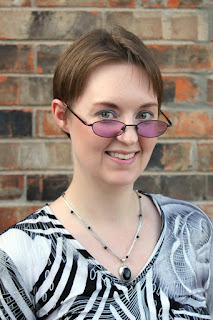 Alycia Christine grew up near the dusty cotton fields of Lubbock, Texas. She fell in love with fantasy and science fiction stories when her father first read Gordon R. Dickson’s THE DRAGON AND THE GEORGE and Robert A. Heinlein’s HAVE SPACESUIT—WILL TRAVEL to her at age ten. Her love-affair with fiction deepened when Alycia took a creative writing course while attending Texas A&M University. After that class, she was hooked as a writer for life. Her subsequent B.S. degree in agricultural journalism not only helped to hone Alycia’s skills with a pen, but also with a camera. Today she uses her skills as a photographer to capture the beauty of the world around her and add additional perspective to her fiction and nonfiction writing. Find her at http://www.alyciachristine.com.


GIVEAWAY:
Four (4) special Book Bundles that contain a $25 gift card, an eBook copy of Skinshifter, and an eBook copy of The Dryad's Sacrifice (prelude novella) (INT)
Ends Oct. 14
Prizing is provided by the author, hosts are not responsible.