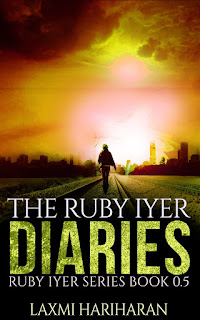 This novelette is a companion book to The Many Lives of Ruby Iyer. A peek into the soul of an angry, young girl, who will come of age in a city on the verge of total annihilation. Ruby kept a diary from the age of ten till she ran away from home at sixteen. It is from here that I picked out a few diary entries for The Ruby Iyer Diaries. This short series of vignettes from Ruby's life, tells you more a little more about the origins of Ruby Iyer.

About The Many Lives of Ruby Iyer (Book #1):

With over 100, 5 and 4 star reviews across Amazon, Goodreads and Netgalley, don’t miss this chance to get your copy of THE MANY LIVES OF RUBY IYER. At 99p/c & Rs 69 for this week only.

This is BOOK 1 in the Ruby Iyer series. A YA ACTION THRILLER with strong dystopian undertones, and a kick-ass protagonist, taking you on a white knuckle ride through a disintegrating Bombay City.  It's also placed as FINALIST Indie Excellence Awards 2015 & as YOUNG ADULT FINALIST in the 2015 IAN Book of the Year Awards.

A girl desperate to rescue her best friend. A cop willing to do anything to save the city he serves. A delusional doctor bent on annihilation. A terrifying encounter propels Ruby Iyer from her everyday commute into a battle for her own survival. Trusting her instincts, she fights for what she believes in, led on a mysterious path between life and death on the crowded roads of Bombay; and when her best friend is kidnapped by the despotic Dr Braganza, she will do anything to rescue him. Anything, including taking the help of the sexy Vikram Roy, a cop-turned-rogue, on a mission to save Bombay. The city needs all the help it can get, and these two are the only thing standing between its total destruction by Dr Braganza's teen army.

As Bombay falls apart, will Ruby be able to save her friend and the city? Will she finally discover her place in a city where she has never managed to fit in? And what about her growing feelings for Vikram?

Vikram never should have left his family, but when Vikram's father bring his half-brother Vishal home, life will never be the same.

Vikram thinks things will be better now that he's gone. He's met the love of his life, his future looks bright and then everything is shattered.

Now, his family's life is hanging in the balance, and only Vikram can do what needs to be done to save them.

From the bestselling dystopian fiction author with over 200 reviews and ratings of her dystopia books across Goodreads, Amazon and other retailers.

"A killer ending and the pacing of the story and the build-up is really good. I related to Vikram, really liked it." Richard Sheehan, Author and editor

"I raced through the book... And the killer ending! Oh my God! It left me with a hangover, and makes me want to physically push the author to write the next book in the series faster." Ritesh Kala, Book reviewer & blogger

If you’re looking for books like Hunger Games, then this dystopia romance, The Ruby Iyer Series.


EXCERPT FROM THE FIRST LIFE OF VIKRAM ROY

She almost died. But when dystopia romance author Laxmi Hariharan had a near death experience, she was told to write. Laxmi is the creator of dystopian romance series, RUBY IYER SERIES (The MANY LIVES OF VIKRAM ROY - FINALIST Indie Excellence Awards, the bestselling The RUBY IYER DIARIES , The FIRST LIFE OF VIKRAM ROY, The SECOND LIFE OF RUBY IYER & VIKRAM ROY, PANKY's FIRST LIFE), and the Amazon bestselling, eLit Gold winner, The Destiny of Shaitan (Bombay Chronicles, 1). If you're looking for books like Divergent and Angelfall, you'll love the RUBY IYER SERIES.

Laxmi writes books similar to Hunger Games while listening to electronica & progressive rock, and downing innumerable cups of extra sweet ginger-chai. She is also an avid photographer of street art and believes she was a tree -- a redwood -- in her past life. London is where she creates. Bombay is what fires her imagination.


All SEPTEMBER earnings from the RUBY IYER SERIES will be donated to SAVE THE CHILDREN: SUPPORT CHILD REFUGEES OF SYRIA. All the RUBY IYER books with their brand new covers, are on SALE all this month at 99p/c & Rs 69/49. Click HERE to buy them.

Giveaway provided by the author, bloggers are not responsible in any way for the prizing.