A REAPER OF STONE


by Mark Gelineau and Joe King


NOTE: This book is FREE on Amazon for 5 days beginning the date of the book blast. 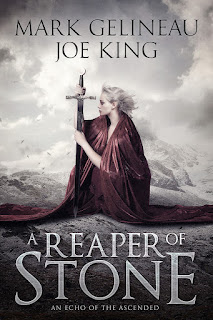 
A Lady is dead. Her noble line ended. And the King’s Reaper has come to reclaim her land and her home. In the marches of Aedaron, only one thing is for certain. All keeps of the old world must fall.

Elinor struggles to find her place in the new world. She once dreamed of great things. Of becoming a hero in the ways of the old world. But now she is a Reaper. And her duty is clear. Destroy the old. Herald the new.


The girl stared directly into Elinor's eyes. There was no hysteria, and no more tears. Just sadness matched with a hard, cold determination. “For the murder.”


At the word, Elinor felt a cold inside her that had nothing to do with the chilling rain. “They were attacked by bandits.”


“They were not killed by mere bandits,” she hissed. “My father was a tempered razor of the Aegis School. He was a match for a dozen armed men. Perhaps more. That is no exaggeration.” She stared into Elinor's eyes with a fierce intensity. “The death of my father and Lady Lliane was no accident. It was an assassination.”


“Stop,” Elinor commanded. She looked around to be sure there were none of Piersym's razors nearby. Two were outside, but on the far side of the tower. Elinor assumed that over the rain, they wouldn't have heard what the girl said.


“You don't believe me?” Tae asked, the hurt clear in her eyes.


Elinor moved close, until they were almost nose to nose. Her voice was quiet, but carried a sharp edge of intensity. “It is not about belief,” Elinor said, holding the girl with her gaze. “You must be careful what you say. Some things once said, cannot be unsaid.”


Tae looked confused and Elinor continued on. “If you make an accusation, you turn your home into a den of wolves.” She shifted her eyes in the direction of the Hearthfire razors on the far end of the parapet. “And these wolves will not allow you to escape if they believe you threaten them.”


The girl frowned, but shook her head defiantly. “But you said it yourself. You fought every day for what you believed in. How is this any different than the rendworms?”


“Because this is not a fight you can win, Tae,” Elinor said.


Mark and Joe have been writing and telling stories together for the last 25 years. They share a love for the classic fantasy tales of their childhood. Their Echoes of the Ascended series brings those old epic characters and worlds to new life.