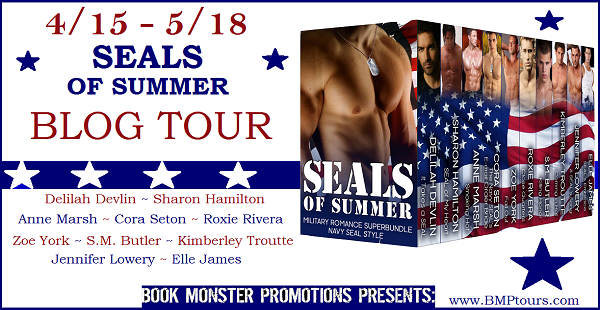 
When Susan heads to the Bahamas, she thinks the sexiest part of the trip is that she can count it as a tax deduction. After all, her agency has new offices in the Bahamas, and she needs face-time with her employees, who also just happen to be her best friends. However, things go quickly awry when their island benefactor comes under threat. After a night of partying on his yacht, she awakens to discover she’s stumbled into a sting operation to lure the bad guys into the open. She’s got to pretend she’s the billionaire’s trophy girlfriend, which isn’t hard when the man taking his place is a sexy ex-SEAL. When the bad guys kidnap the couple and imprison them on a deserted island, it’s up to ex-SEAL Justin to orchestrate an escape.


Kate Livingstone’s engagement is at risk the instant she sets eyes on the handsome elite warrior sitting next to her on a plane trip to visit her sister. Navy SEAL Tyler Gray had thought he knew what he wanted in life, until he meets Kate and their obvious attraction for each other sparks something deep in his soul. What starts out as innocent letters between friends turns out to be much more. Can someone fall in love deeply just with words and letters exchanged, or is this just a pleasant fantasy that will ruin their lives forever?


SMOKING HOT by National Bestselling author Anne Marsh: When an ambush kills his teammate, Navy SEAL Tye Callahan steps in to fulfill the fallen man's obligations. He vows to spend the summer in Strong, California, fighting fires with the smoke jumper team and looking out for Katie Lawson, his teammate's fiancée. Now, as the summer heats up, they must decide if the chemistry burning between them might just be their second chance at living their own lives… together.


THE NAVY SEAL’s E-MAIL ORDER BRIDE by National Bestselling author Cora Seton: Mason Hall, Navy SEAL, has fought insurgents, drug lords and terrorists, but his current mission is one for the records. Not only must he find a wife—and get her pregnant—or forfeit the ranch his family has prized for over a hundred years, he also must convince his three brothers to marry, too—before the year is up.  Who knew one city girl and three wayward brothers could put up such a fight?


FALL OUT by Zoe York:


Drew Castle is a Navy SEAL with a bad case of indifference. Until Annie Martin shows up on his doorstep, scared out of her mind, and all of a sudden, keeping her safe becomes the most important mission of his life. And this time, he’s on his own. Annie knows that letting Drew whisk her away under the guise of protection is a recipe for disaster, but he's the only person she can trust. Drew's strange mix of laid-back bossiness takes some getting used to, but as they escape to a Caribbean hideaway, she finds herself wondering what it would be like if they came together at a different time. As the threat is resolved, a new danger arises: one of passion, heat and desire so overwhelming neither can resist, no matter the cost.


When Navy SEAL Leland Gates runs off to his family's secluded cabin to lick his wounds, he never expects to find makeup heiress Jamie Pearson hiding out there. His sister's best friend swears she's only there for a weekend of relaxation, but his well-honed instincts tell him that she's in big trouble. Getting tangled up in Jamie's latest hot mess—or her sheets—is the very last thing he needs, but in close quarters like these, there's no denying the white-hot passion blazing between them.


Returning home after a disastrous extended deployment, Navy SEAL Brody Battles struggles with nightmares and government secrets building a wall between him and his wife, Devyn, especially when a security breach compromises his identity. While they’re adjusting to being a family again, an old enemy waits in the shadows, salivating for the sweet taste of revenge.


For Navy SEAL Mack Riley, rescuing a family in Colombia is not as hard as seeing the admiral’s daughter again. He’d sworn a vow to steer clear of that heartbreaker. But since the family was taken hostage on Jenna’s watch, she’s determined to join the rescue team. When the admiral orders him to protect Jenna, Mack is forced to keep her as close as body armor. In the heat of battle, love Mack and Jenna deny breaches their defenses. With missiles locked onto their coordinates…can they save the family and get out alive?


Navy SEAL Jack Taggart’s plans to catch some much-needed downtime between deployments are demolished when he risks everything to rescue beautiful wedding singer, Darci O’Shea, from a band of thieves. Will the battle between their inner demons be the hardest one to fight, or will they find rescue in each other’s arms?


Navy SEAL, Ceasar Sanchez has it bad for Army Lt. McGee, a nurse at Bagram Airfield in Afghanistan. When a rescue mission goes bad and he ends up being medically evacuated, she’s there. Not sure whether he’ll walk again, he’s afraid to pursue the pretty nurse, not wanting to shackle her with half a man. Lt. Erin McGee is a Critical Care Air Transport Team nurse, responsible for ensuring her patients arrive alive at the next level of health care. Fighting an attraction to a sexy Navy SEAL she outranks, she resists the risk of losing her commission for fraternization. But one sensual tryst behind a supply building isn’t enough and the SEALs determination to see her wear at her resolve. Ceasar and Erin share a medevac plane ride to Germany with a critically wounded Taliban leader who could provide information to the whereabouts of four missing soldiers. Transferred to the hospital at Landstuhl, Caesar undergoes surgery, restoring movement to his legs in time to stop a hostage takeover of the ICU where Erin is in charge of the Taliban leader’s care. Together they fight to save lives and halt a Terrorist attack, while finding that love trumps rank every time.