Lost and Found by Karey White Blog Tour and Giveaway 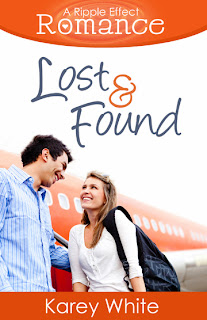 Lost and Found by Karey White Lydia was supposed to have an adventurous and exciting summer. Instead she's done nothing more than read and eat takeout. Now it's time to go home, and what does she have to show for it? A big fat nothing. Unless, of course, her trip to the airport somehow turns into something more than just a flight home. Blake feels like he's been sent on a wild goose chase. While work is piling up back in Denver, he's on the other side of the country, hunting for some mysterious box that his grandfather left him. Well, no more. Nothing inside that box could possibly be more important than the opportunity to make it as the youngest partner at his firm. So he's going home, and that's that. But that's before he discovers his flight has been cancelled. When these two strangers meet at the airport, they make a split-second decision to search for the box together. Maybe with both of them on the hunt, Lydia can have her adventure and Blake can find the box. And maybe, if they’re lucky, they’ll even find some romance.

Author Karey White Karey is a USA Today best-selling author. She grew up in Utah, Idaho, Oregon, and Missouri. She attended Ricks College and Brigham Young University. Her first novel, Gifted, was a Whitney Award Finalist. She loves to travel, read, cook, and spend time with family and friends. She and her husband are the parents of four wonderful children.

Website * Twitter * Facebook * Goodreads
Excerpt;
When Lydia approached her seat a few minutes later, an airport security officer with a shiny face and a little paunch was standing in the aisle by her suitcase.
“Is this your bag?” he asked.
“Yes. Is everything okay?” Why hadn’t she paid attention to the voice in her head?
“It appeared to be left unattended. In the future, I’d advise you to either take your bag with you or move it closer to your boyfriend when you leave.”
Lydia shot a surprised glance at the movie star, and he shrugged. “Sorry, babe. I told him you’d be right back, and I offered to move your bag over by me, but he wanted me to wait for you to come back.”
Lydia almost choked. She knew he was just rescuing her from the security guard, but no one had ever, ever called Lydia “babe” before and certainly no one as handsome as Ryan Gosling. It had a wonderful ring to it. Was her racing heart because of being questioned by an officer of the law or because this man had just called her “babe?”
Lydia dragged her distracted gaze back to the much less interesting man standing by her bag. “I’m so sorry. I just had to make a little run to the ladies’ room. It won’t happen again.”
“See that it doesn’t. Airport security is no laughing matter.” Was she laughing? “Have a nice flight.”
Lydia sat down by her bag. “You should probably move over here by me since you’re my girlfriend. We don’t want to make him suspicious.”
“Oh. Of course. I should have thought of that.” Did the movie star want Lydia to sit by him? Lydia rolled her eyes at her silliness. He was just trying to keep from being hassled any further. He went back to working on his laptop as she moved her things across the aisle. “Sorry about that,” Lydia whispered.
“No problem.” He looked up from his computer and smiled. Oh. My. Wow! Up close his dimple was even cuter. The bigger the smile, the deeper the dimple. “Are you taking a trip to Denver?” he asked.

The Ripple Effect Romance Novella Series Enjoy this exciting new series of clean novellas by six critically-acclaimed authors. "Like a pebble tossed into calm water, a simple act can ripple outward and have a far-reaching effect on those we meet, perhaps setting a life on a different course—one filled with excitement, adventure, and sometimes even love." Book 1: Home Matters by Julie N. Ford Book 2: Silver Linings by Kaylee Baldwin Book 3: Righting A Wrong by Rachael Anderson Book 4: Lost and Found by Karey White Book 5: Second Chances 101 by Donna K. Weaver Book 6: Immersed by Jennifer Griffith

Tour Giveaway
$25 Amazon Gift Card or Paypal Cash Ends 5/12/14 a Rafflecopter giveaway
Posted by 3 Partners in Shopping at 12:08 AM