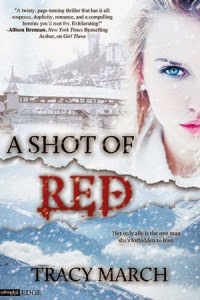 After fleeing D.C. following a one-night stand that had her reeling, biotech company heiress Mia Moncure has thrived working with a humanitarian aid team administering vaccines in Haiti. When the United States is threatened with a flu epidemic, Mia's grandmother demands her return to unveil a new flu vaccine for Moncure Therapeutics. She arrives to find that her ex-boyfriend, the company's PR Director, has died in a suspicious accident in Switzerland that Mia soon suspects was murder.


Determined to reveal a killer, Mia heads to Switzerland where she's threatened as she discovers a plan to infiltrate the vaccine for nefarious purposes. Desperate for backup, she turns to sexy Gio Lorenzo, Communications Director for her mother, a high-ranking senator--and Mia's one-night stand. While negotiating their rocky relationship, they race to uncover a deadly scheme that could ruin her family's reputation. But millions of people are being vaccinated, and there's more than her family's legacy at stake. Mia and Gio struggle to discover the truth about the scheme and their feelings for each other, but it just might be too late.


Award-winning author Tracy March writes romantic thrillers influenced by her interest in science and politics. She also writes lighthearted romances inspired by her real-life happily ever after.


Look for Tracy’s romantic thrillers GIRL THREE and A SHOT OF RED. Her Suddenly Smitten contemporary romance series includes THE PRACTICE PROPOSAL, TEMPTED IN THE TROPICS (both selected by RT Book Reviews as Top Picks), and a third title releasing in summer 2014.


Always up for travel and adventure, Tracy has flown in a stunt plane, snowmobiled on the Continental Divide, ziplined in the Swiss Alps, and been chased by a bull in the mountains of St. Lucia. She loves Nationals baseball, Saturday date nights, and Dairy Queen Blizzards—and rarely goes a day without Diet Coke and Cheez-Its.


Tracy lives in Yorktown, Virginia, with her superhero husband who works for NASA. Visit Tracy online at www.TracyMarch.com.


Don't miss out on great books from Entangled Publishing - Check out their Steals and Deals!


Pump Up Your Book and Tracy are teaming up to give away a $50 Amazon/B&N Gift Card!