Righting a Wrong by Rachael Anderson Blog Tour and Giveaway 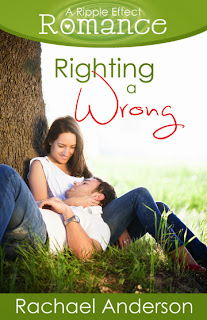 Righting a Wrong by Rachael Anderson Seven years ago, Cambri Blaine fled her small hometown of Bridger, Colorado after her senior year ended in a fiasco. Only Jace Sutton knew the real reason why—that she was a spineless coward. Now, seven years later, her father's been in an accident and needs help, and Cambr has no choice but to return home. So with trepidation, she takes a leave of absence from the landscape architecture firm where she works and boards a plane, hoping against hope that Jace is no longer around and that the past can stay where it belongs—in the past. If only life worked that way. Jace never expected to see Cambri again. After she’d led him on, bruised his heart, and left town without a backward glance, he was forced to pick up the pieces and try not to hate her for it. Eventually, he put it behind him and moved on, creating a life for himself in his beloved hometown. But now that Cambri is back and looking more beautiful and sophisticated than ever, some of those old feelings resurface, and Jake instinctively knows, for the sake of his heart, that he needs to avoid her at all costs. If only it were that easy.

Author Rachael Anderson A USA Today bestselling author, Rachael Anderson is the mother of four and is pretty good at breaking up fights, or at least sending guilty parties to their rooms. She can't sing, doesn't dance, and despises tragedies. But she recently figured out how yeast works and can now make homemade bread, which she is really good at eating.

The Ripple Effect Romance Novella Series Enjoy this exciting new series of clean novellas by six critically-acclaimed authors. "Like a pebble tossed into calm water, a simple act can ripple outward and have a far-reaching effect on those we meet, perhaps setting a life on a different course—one filled with excitement, adventure, and sometimes even love." Book 1: Home Matters by Julie N. Ford Book 2: Silver Linings by Kaylee Baldwin Book 3: Righting A Wrong by Rachael Anderson Book 4: Lost and Found by Karey White Book 5: Second Chances 101 by Donna K. Weaver Book 6: Immersed by Jennifer Griffith


She rested her hand on his arm, but when he tensed, she pulled it away. “University Park and Charlotte are beautiful cities with so much to offer, but Bridger isn’t without its charms. Coming back here is like entering a different world.”


“An archaic world.”
“That’s not what I’m talking about,” said Cambri. “People here know and care about each other. When you walk down the street, you pass friends instead of strangers. The air is cleaner, the pace slower, and the world calmer. I’m pretty sure the sky is even bluer.”


Jace slung his bag over her shoulder and leveled her a hard look. “Actions speak louder than words, Cambri. Or are you forgetting you left for bluer skies six years ago?”


Her gaze held steady. “Sometimes it takes seeing other skies to know which is bluer.”


One eye brow quirked as he considered her words. “What are you saying? That you’ve had your fill of city life and want to move back?”


Cambri looked away. Was she saying that? No, of course not. That would be crazy. She was happy in Charlotte. “All I’m saying is that I appreciate Bridger a lot more than I used to.”


He let out a low chuckle that didn’t sound even close to humorous. “Like I said, actions speak louder than words.” He started to walk past her, then paused, looking beyond her to the back door. “You talk of passing friends instead of strangers, but in my experience, friends are really just strangers disguised as familiar faces.” His arm brushed against her shoulder as he left, and an uncomfortable, almost palpable, sensation spread down her arm and landed with a thud in her gut.


a Rafflecopter giveaway
Posted by 3 Partners in Shopping at 1:16 AM