Summary:
Starting a family was supposed to be easy.
Twin sisters June and July have never encountered an obstacle they couldn’t overcome. Married just after graduating college, the girls and their husbands remained a close-knit group. Now settled and successful, the next logical step is children.
But as the couples struggle to conceive, each must reconcile the goodness of God with their present suffering. Will their faith be strong enough to triumph in the midst of trial?

About the Author:
Elizabeth Maddrey began writing stories as soon as she could form the letters properly and has never looked back. Though her practical nature and love of math and organization steered her into computer science for college and graduate school, she has always had one or more stories in progress to occupy her free time. When she isn’t writing, Elizabeth is a voracious consumer of books and has mastered the art of reading while undertaking just about any other activity. She loves to write about Christians who struggle through their lives, dealing with sin and receiving God’s grace.

Elizabeth lives in the suburbs of Washington D.C. with her husband and their two incredibly active little boys. She invites you to interact with her at her website www.ElizabethMaddrey.com or on Facebook: http://www.facebook.com/ElizabethMaddrey 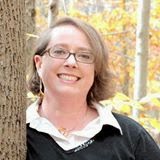 Excerpt:
“Stop stop stop stop.” June breathed the words as the digital readout on the bathroom scale flickered up. She cringed when the hateful thing finally followed her directions. One forty. One hundred and forty pounds. She stumbled backwards off the scale and dropped onto the cold edge of the bathtub. At five foot two, she was used to numbers much more in the range of one ten. But the last six months had added thirty pounds…that was five pounds a month. She buried her head in her hands. What was going on?
“Morning, baby.” Toby shuffled into the bathroom, rubbing his eyes. He stopped to give her an appreciative look and waggle his eyebrows. “Careful, you’re going to make me late for work.”
She chuckled in spite of herself. “You’re insane.” And blind. There was no point in drawing his attention to her ever expanding girth. She was on her way to being twice the woman he married four years ago. He hadn’t signed on for a two-in-one special.
He grabbed her arm and pulled her close, burying his nose in her neck. “I can’t help it if I have the world’s most enticing wife.”
He couldn’t possibly mean it. Her fat rolls squashed against his still-firm abs as he tightened his embrace. She fought the urge to push away and put on a robe. She forced her tone to be light. “Now, now. Didn’t you say you had a big meeting this morning?”
He pressed a kiss to her head and eased back, eyes still hinting at his interest. “I did…sadly, I did.”
She crossed her arms over her belly as he turned on the shower and tossed his towel over the door.
“Any news, June?”
She swallowed the lump in her throat and shook her head.
“We’ll just have to practice more.” He shot her a wicked grin and stepped into the steaming shower.

The author Faith Maddrey has written a story about one of the most difficult times in a person's life. Infertility not only affects the man and woman but it also involves the rest of their friends and family who are not sure how to react and what to say.  The 2 women in this book are twin sisters who are unable to get pregnant. They must come to terms with their problem each in their own way. Is their faith and their love for each other strong enough to see them through this?   The book is a must read for someone who feels that they are all alone while trying to get pregnant. I give this book a 5/5. I was given this book for free for a honest review and all opinions are my own.
Posted by 3 Partners in Shopping at 4:11 PM