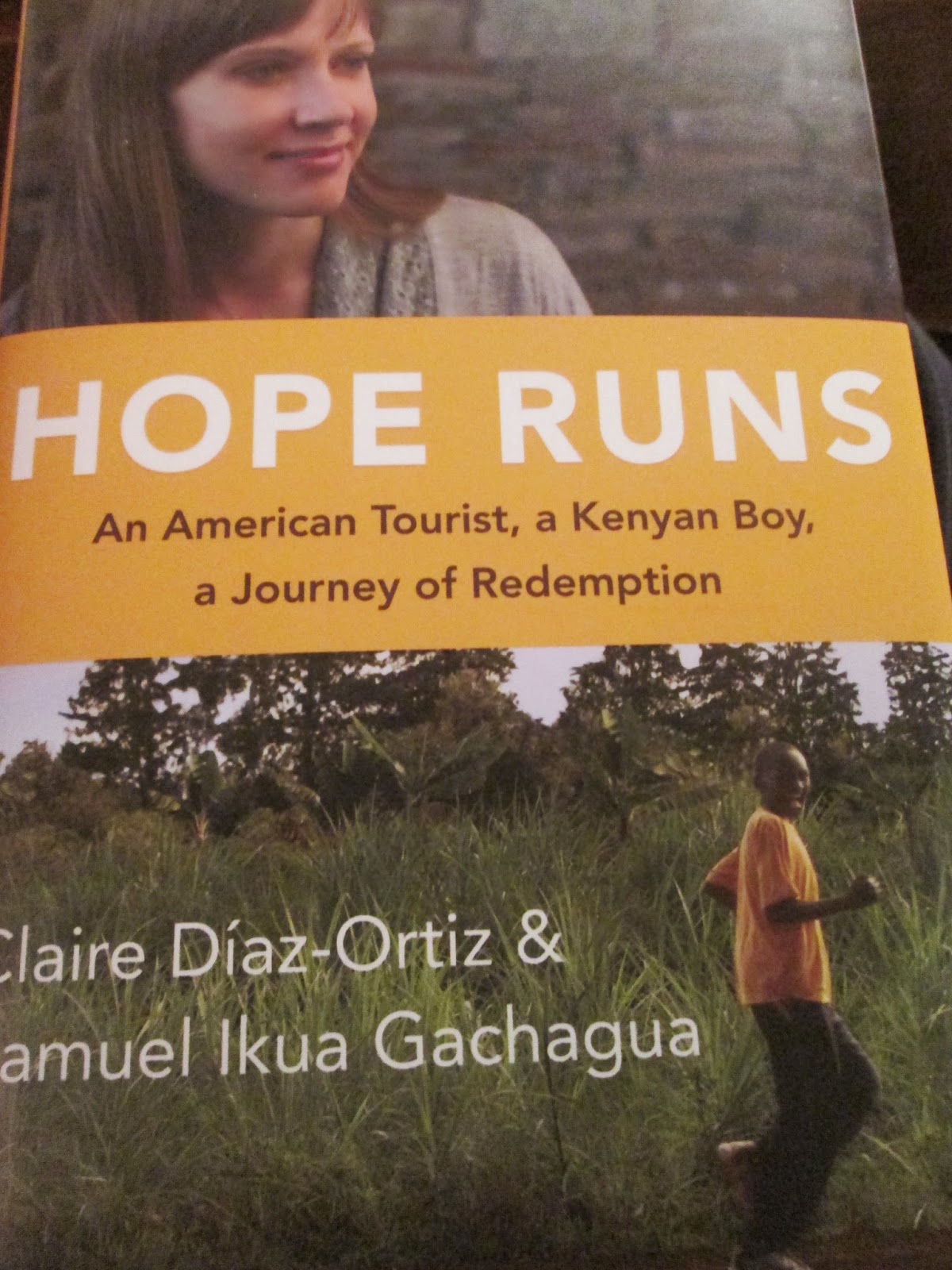 She went to Kenya to climb a mountain. But God had other plans.
When Claire Díaz-Ortiz arrived in Kenya at the end of an around-the-world journey, she decided to stay the night, climb Mount Kenya, and then head back home. She entered an orphanage, seeing it as little more than a free place to spend the night before her mountain trek.

Sammy Ikua Gachagua had lost his father to illness, his mother to abandonment, and his home to poverty. By age ten, he was living in a shack with several other children and very little food. He entered an orphanage, seeing it as a miracle with three meals a day, a bed to sleep in, and clothes on his back.

Hope Runs is the emotional story of one American tourist, one Kenyan orphan, and how one day became one year that would change the course of both of their lives forever. It's about opening your heart to outrageous possibilities. It's about what it means to hope for the things you cannot see.

It's about how God can change your life in the blink of an eye.


"One restless woman from America seeking--something . . . and one homeless boy from Africa seeking--someone . . . write a story that has your heart colliding with what you're looking for--right where you are."--Ann Voskamp, author of the New York Times bestseller One Thousand Gifts

"Hope Runs is more than a book, it's a monument to empathy."--from the foreword by Donald Miller, bestselling author of Blue Like Jazz

"This book isn't just a story, it's an invitation to love extravagantly. It's about relentless hope and tremendous love. Buckle up, you're about to be changed."--Bob Goff, Honorary Consul for the Republic of Uganda; New York Times bestselling author of Love Does

"Claire knows firsthand what it means to really give of her time and talent, and in this book she challenged me to do the same. My heart sings that there are people in the world like her."--Tsh Oxenreider, author of Notes from a Blue Bike

"Claire and Sammy invite us into their story with the comfortable familiarity of old friends, challenging us to see beyond the borders of what we thought life was supposed to hold and how detours are often the best storylines of all."--Lisa-Jo Baker, author of Surprised by Motherhood; community manager for (in)courage

"A beautiful story, beautifully told. This book is a timely reminder that love and hope can bridge continents and create family anywhere."--Shauna Niequist, author of Bread & Wine


Claire Díaz-Ortiz is an author, speaker, and technology innovator who has been named one of the 100 Most Creative People in Business by Fast Company. Claire was an early employee at Twitter, where she still works, and over the years has been called everything from "a mover and shaker" (Mashable) to a "force for good" (Forbes). She is the author of several books, including Twitter for Good: Change the World One Tweet at a Time. She is a frequent international speaker and writes a popular business blog at www.clairediazortiz.com.

Claire holds an MBA from Oxford University and a BA and an MA from Stanford University. She is the cofounder of Hope Runs, a nonprofit organization operating in AIDS orphanages in Kenya. She has appeared widely in major television and print news sources such as CNN, BBC, Time, Newsweek, the New York Times, the Washington Post, Fortune, Forbes, Wired, and many others. Find her on Twitter @claire.

Samuel Ikua Gachagua was born in rural Kenya in 1992. After losing his parents at a young age, he struggled to survive until he was placed in an orphanage in Nyeri, Kenya. In 2009, he received a full-ride scholarship to Maine Central Institute, granting him a rare US visa and the chance to begin his sophomore year of high school under the guardianship of Claire Díaz-Ortiz. After graduating from high school, he spent a year serving in Ecuador as a fellow for Global Citizen Year. He is an up-and-coming motivational speaker and can be found on Twitter @sammyikua.

I just finished reading this story and I was moved very much by it. It is so hard for some of us to understand how difficult some people have to deal with. It is so much worse when they are children, too young to help themselves. This is a story which is  true inspiration. I love the way that it is told by both Claire and Sammy so that you can really understand what they each are going through. I do not know which is the most amazing, Claire or Sammy.  I give this book a 5/5.  I was given this book by Revell Publishing for the purpose of a review and all opinions are my own.
Posted by 3 Partners in Shopping at 11:44 PM