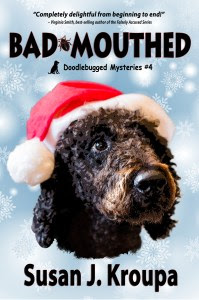 Who knew chasing a rat in the middle of a Christmas pageant could cause so much trouble? Certainly not Doodle, the obedience-impaired labradoodle who works for “the boss,” Josh Hunter of Hunter Bed Bug Detection, nor Molly, the boss’s ten-year-old daughter. But then Doodle’s the first to admit he doesn’t quite get Christmas.
Doodle’s antics during the pageant draw the attention of a popular video-blogger, who asks to do a feature his on sniffer-dog skills. But when the blog airs, pretty much the opposite of what Molly and the boss expected, the boss’s phone rings off the hook with distraught customers who think Doodle’s bed bug “finds” can’t be trusted.  Molly, searching for a way to set things right, befriends the blogger’s son, a boy alienated from his mother who wants only to go live with his father.
Throw in a handful of threatening letters, some lost dogs, and a devastating fire, and Molly and Doodle have their hands—well, in Doodle’s case, his paws—full finding out just who’s been naughty and who’s been nice.
A charming cozy for all seasons and for dog lovers of all ages. 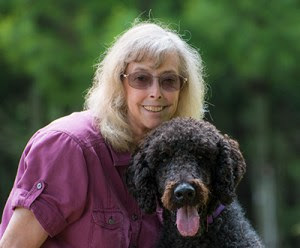 3 Partners in Shopping, Nana, Mommy, & sissy, Too!  would like to thank Author Susan Kroupa for sharing her post with us today.


Nosing Out a Series

Doodle, the highly independent labradoodle who narrates the Doodlebugged mysteries, is not afraid to admit he’s a service-dog flunkee. “Smart and obedient don’t always go hand in hand,” he likes to say unapologetically. In the series, he works as a bed-bug-detecting dog for “the boss”, Josh Hunter of Hunter Bed Bug Detection. Doodle and Molly, the boss’s ten-year-old daughter, who’s equally independent, always seem to end up in trouble and with a mystery to solve.


I can see you crinkling your nose already. “Bed bugs?” you ask, barely suppressing the “euwww” that comes to mind. “How did you happen to write about that?”


The answer lies in the misfortune of one of my sons, an attorney who lives in the Arlington, VA. He called one day, quite upset, to tell me he was covered in tick bites.


“Can’t be ticks, then,” I told him. I live in the woods near the Blue Ridge Parkway where there’s no shortage of ticks. Inevitably, a tick bite comes complete with a tick, at least for the first few days. (And can also come complete with months or years of disease, but that’s another story.) “Could the bites be from bed bugs?” I asked.


At the suggestion, my son investigated the possibility and discovered that bed bugs had infested the apartment directly over his. He complained to the manager, who promptly sent out a bed bug inspector. With a dog. The sniffer dog, as scent-detection dogs are often called, promptly found evidence of a substantial colony of bed bugs in my son’s apartment.


Bad luck for him, but great for me, because I’d been toying with the idea of writing about a scent detection dog that—how should I put it?—wasn’t in one of the glamour jobs of nose work. And I envisioned the books to be light cozy mysteries, suitable for dog lovers from kids through adults. Sniffing out bed bugs wouldn’t put Doodle in the potentially gritty situations that being a narcotics or police dog would. Plus, I’d already decided that he would be a labradoodle, a cross between a poodle and a Labrador retriever, not the kind of dog that generally works in those professions. As Doodle puts it in Dog-Nabbed, when an undercover cop asks if he’d like to be a police dog, “Not sure what he means, since everyone knows German shepherds are the ones who go into police work. A little too intense for my taste, but in my experience German shepherds are all about intensity.”


I set out to do research and discovered that while sniffer dogs in the bed bug profession generally tend to be beagles or Labrador retrievers, there were, in fact, some labradoodle bed-bug dogs. I already had a model for Doodle in mind—the extremely independent, often challenging, and sometimes affection-impaired labradoodle we’d adopted as a puppy a few years earlier. His antics gave me plenty of material for a starting point.


But I wanted the series to be more than “cute dog solves mystery”. Other than the fact that he’s the narrator, with some admitted stretching of his understanding in certain situations, Doodle acts like a dog: nose driven, literal (as in metaphor-impaired), attuned to body language more than words, and prone to misunderstanding what the humans around him are saying. He can’t speak except through his own body language, and he’s the first to complain how clueless humans are in understanding that.


And more than having at least a semi-realistic dog, I wanted him in a real family who has real problems outside the mystery of the moment. Though Molly drives the action and is the one who solves the mysteries, throughout the course of the books, the reader sees “the boss”, Josh, struggle as a single parent, sees his own fears and triumphs, and the budding possibility (beginning in book two) of romance—all filtered through the eyes of a dog, who sometimes gets it and sometimes doesn’t.


Three years, three books, and a mountain of research later, Bad-Mouthed, the fourth book in the series has just been released. While each book continues the characters and relationships developed in earlier books, every book is a stand-alone, with enough background that a first-time reader to the series shouldn’t feel lost. I have to report that, sadly, no bed bugs were harmed in the creation of this series.


In Bad-Mouthed, Doodle’s the first to admit he doesn’t understand all the fuss about Christmas. What’s with all this “white Christmas” stuff—does the day come in colors?—not to mention he has to be a sheep in the Christmas pageant. Why anyone would prefer a sheep to a dog is beyond him.


Doodle’s behavior during a Christmas pageant—hey, if a dog sees a rat, he will chase it, right?-- sets off a chain of events that threaten the boss’s business when serious accusations are made as to the accuracy of Doodle’s “alerts” when detecting bed bugs. Doodle knows something’s wrong because his motto, “the nose never lies” has been proven true over and over again. Throw in threatening letters, a terrible fire, and a lonely boy, estranged from his mother, and the resulting mix takes all of Molly’s ingenuity and Doodle’s courage to uncover the truth.


Bad-Mouthed is available in paperback and ebook formats from most retailers. Visit me on my webpage, www.susankroupa.com or sign up for my newsletter at http://eepurl.com/3PUR1 (no spam or address sharing ever, I promise) and be the first to know about new releases and book sales. Meanwhile, Laurel Fork Press is currently running a promotion of Bed-Bugged, the first Doodlebugged mystery. For a limited time, you can get a copy for a considerable discount on almost any site—(here’s the Amazon one: http://amzn.to/1iy71B3 ) and learn just how Doodle got himself into the bed bug detection business, and, more importantly, how he met the boss and Molly.