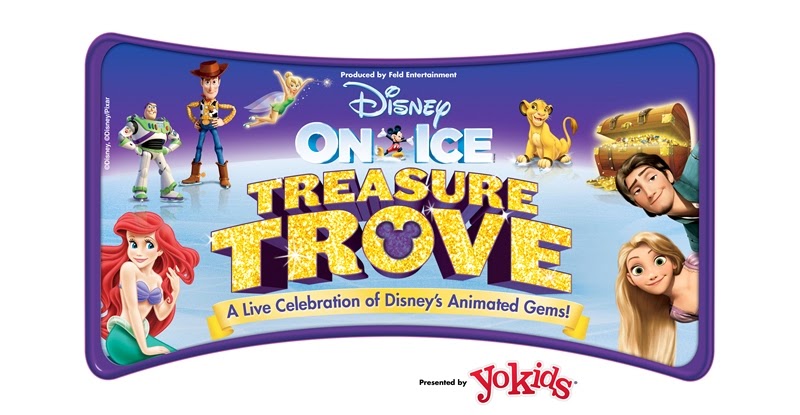 This is what is in this years show:

·         Disney On Ice presents Treasure Trove Presented by Stonyfield YoKids Organic Yogurt commemorates the legacy of Disney animated films with an all-new medley of Disney tales spanning the years from the first film, Snow White and the Seven Dwarfs, to the 50th film, Tangled

·         Audiences will enjoy a gem for every generation in this extraordinary lineup from the Disney animated film vault:

·         More than 50 characters are featured in this action packed adventure that lets families experience their favorite Disney animated films live on ice.

·         The Toys are Back in Town!  Special appearances by Toy Story favorites, Woody, Jessie and Buzz Lightyear.  Woody and Jessie get the audience up out of their seats, when they teach everyone the “Yee Haw Dance” at the start of the show. 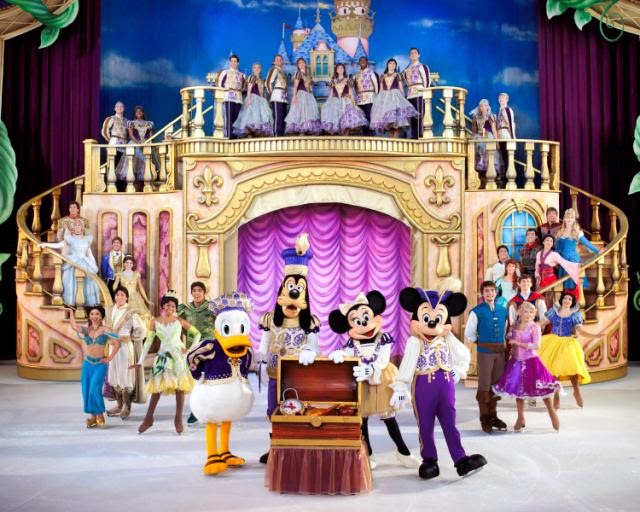 Hartford, CT – December 8, 2014  — Disney On Ice presents Treasure Trove Presented by Stonyfield YoKids Organic Yogurt sets the gold standard with a magical medley of Disney tales in one jam-packed ice show that commemorates the legacy of Disney animated films. This skating spectacular visits Bridgeport’s Webster Bank Arena fromJanuary 8th-11th and Hartford’s XL Center  from January 14th-18th.  Tickets are now on sale.
Get tangled up in Disney’s 50th animated feature with Rapunzel and Flynn and enter the worlds of your other favorite Disney princesses –Tiana, Cinderella, Jasmine, Ariel, Sleeping Beauty, Belle, Mulan and of course, the one who started it all, Snow White.  Ahoy, Mateys!  Set sail with Peter Pan, the always sassy Tinker Bell and the cantankerous Captain Hook and his pirate pals on an adventure beyond Never Land!  Trek the wilds of Africa with Simba, Nala, Pumbaa and Timon as they discover the true meaning of the ‘Circle of Life.’  Tick-Tock!  Tick-Tock!  Don’t be late to a very important date with Alice and the Mad Hatter as they march with the Queen of Hearts’ Army of Cards.  Relive magical moments in this ultimate Disney animation celebration coming to Bridgeport and Hartford.

To learn more about Disney On Ice Presented by Stonyfield YoKids Organic Yogurt, go to www.DisneyOnIce.com, or visit us on Facebook and YouTube. 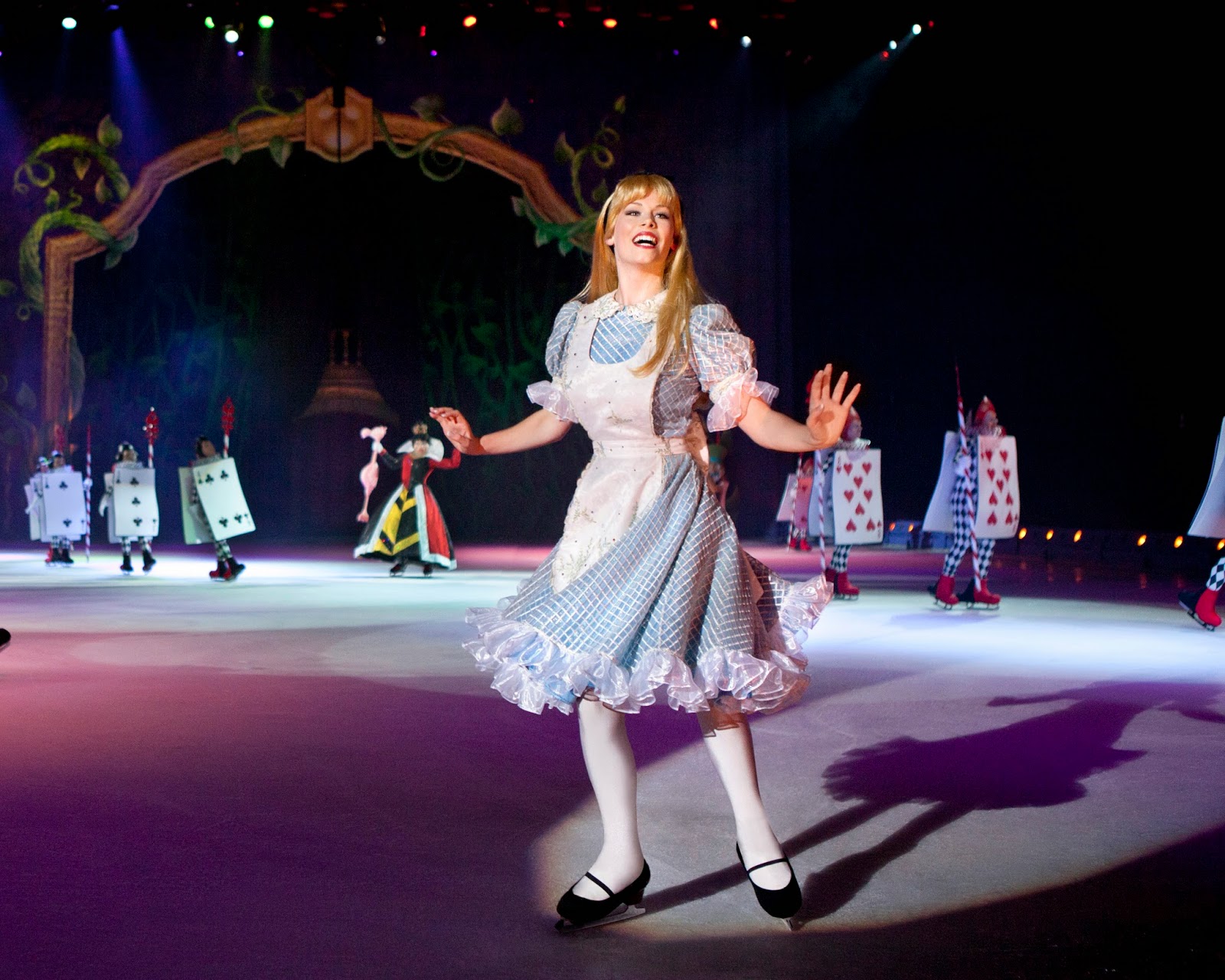 Trivia
1.      As Peter Pan teaches the Darling children to fly, what are they sprinkled with that helps them?
Answer: Tinker Bell’s pixie dust

2.      Where does Peter Pan tell Wendy Neverland is located?
Answer: Second star to the right and straight on till morning

4.      How does Captain Hook know when the crocodile is approaching?
Answer: The crocodile makes a tick-tock noise.

5.      What is the name of Captain Hook’s assistant and only friend?
Answer: Smee

7.      What kind of animals are Timon and Pumbaa?
Answer: Timon is a meerkat and Pumbaa is a warthog.

10.  Simba gets trapped in the middle of a stampede of what type of animal?
Answer: Wildebeast

12.  How does Alice get to Wonderland?
Answer: By falling down the rabbit hole

13.  Who wished Alice a Happy Un-Birthday?
Answer: The Mad Hatter and the March Hare

14.   Why are the cards painting the roses red?
Answer: They planted the white roses by mistake.

15.   What game does Alice play with the Queen of Hearts?
Answer: Croquet

17.  On her birthday, Rapunzel’s dream is to do what?
Answer: See the floating lanterns.

18.  Where does The Princess and the Frog take place?
Answer: New Orleans

19.  In The Princess and the Frog, what instrument does Louis the alligator play?
Answer: the trumpet

20.  Which of the dwarfs wears glasses?
Answer: Doc

21.  In the beginning of the movie, what is Snow White standing by when she wishes for her one true love?
Answer: a wishing well

22.  According to Cinderella, what is one thing even her evil stepmother can’t order her to stop doing?
Answer: Dreaming

23.  What is the name of Jasmine’s tiger?
Answer: Rajah

24.  What object does the Little Mermaid, Ariel, call a “dinglehopper”?
Answer: A fork

25.  What do the fairies rename Aurora when they are raising her in the cottage in the woods?
Answer: Briar Rose

26.  What does the Beast give to Belle so that she can she her father?
Answer: a magic mirror

27.  What did Mulan’s grandmother give her for luck?
Answer: a cricket

Email ThisBlogThis!Share to TwitterShare to FacebookShare to Pinterest
Labels: disney