Curses are designed to be cruel, but the one afflicting Jordan and his brothers is almost beyond bearing. A dragon born by blood magic, he is an immortal trapped in human form, with only one hope of finding his eternal mate. He must bite her—and pray she lives. 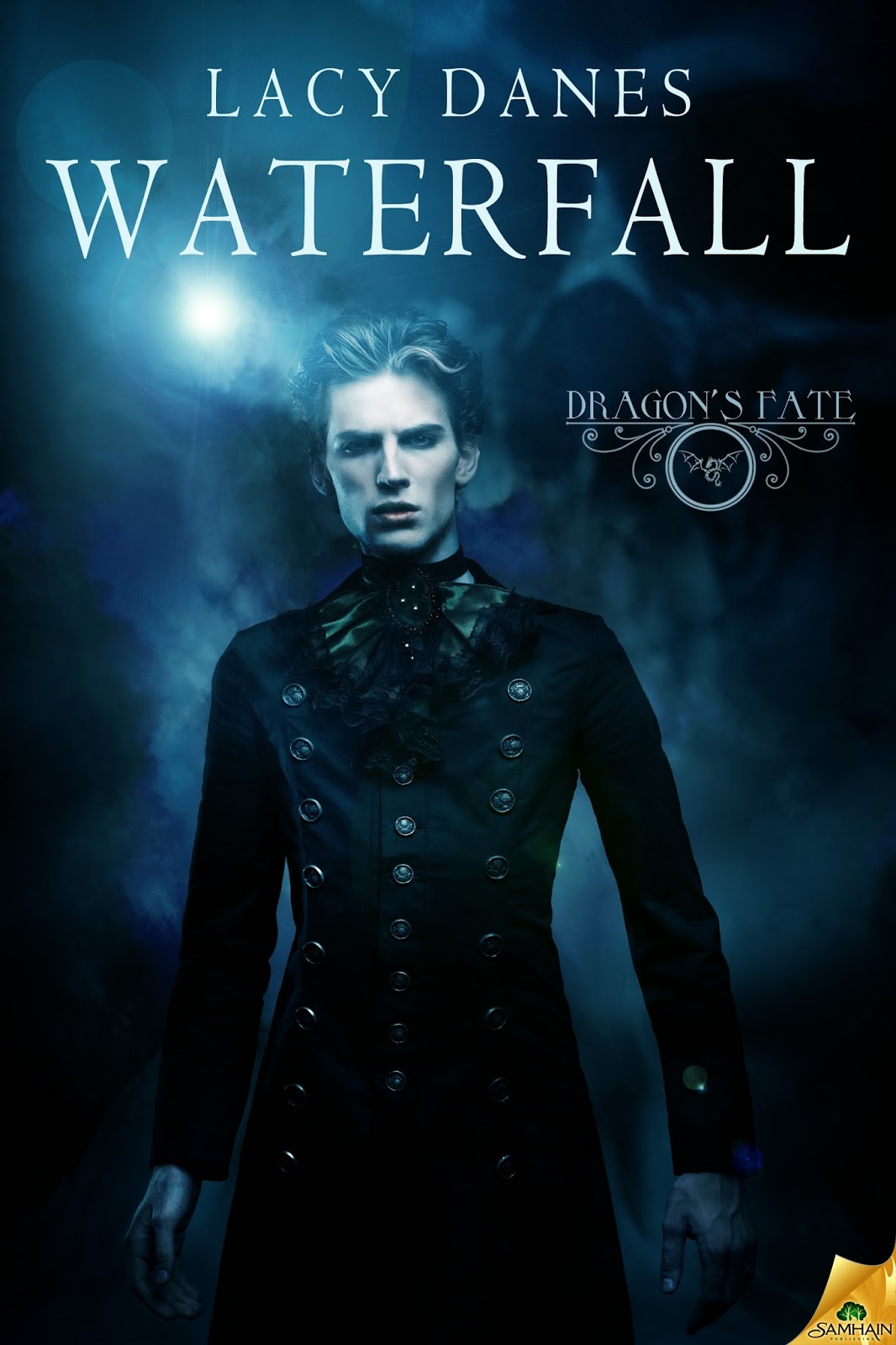 One dark night, he senses the wounded heartbeat of a woman in the shadows, begging him to end her life. Ever the gentleman, he chivalrously obliges her wish. Only to discover three days later that she lives. And has married another.


Celeste always dreamed of marrying for love, but the nightmare of living in her father’s home drives her to wed the Duke of Hudson. Yet on her wedding eve, she is compelled to follow a mysterious man who professes to know her secret. A man with curious blue scales on his muscular arms—whose shadowed eyes reflect a dangerous mix of destiny and desire…

Warning: This novel contains four super-hot dragon brothers, and a curse born from magical power that has left them wondering who they are all their lives.

Carefully stepping around scattered, fractured boards, trunks and lengths of tangled rope, Jordan and Ferrous neared the last grouping of rocks at the trees’ edge. Jordan sighed. About time.

A faint heartbeat crawled out of the obscure shadows, stalked up his spine. Something lived from this bloody mess. Though barely.

Ferrous turned to the left. “I feel it too.”

On the opposite side of the rocks, jagged boards bumped, clattering against a boulder. A mass of

tangled human remains bobbed and swayed with each lap of water against the shore.

From this mess, a heartbeat cried. Jordan closed his eyes and sighed as his stomach flipped. He would find it. He stepped into the water amid the carnage and shuddered. I must move as hastily as possible. I can do this. The sound of life grasped him as if a hand itself clasped his flesh. He flinched, then turned to the left.

An arm’s length away, half in the water, lay a woman. Her limbs were twisted and broken, as if made of nothing more than weeds. A man’s head, severed from the body it had once belonged to, floated close to her hand. Jordan’s heart pinched, and the scales on his elbows prickled anew.

She hung like a sack of barley in his grasp. Her long, wet skirts and hair trailed cold water in a stream, trickling over the rocks and babbling down into his boots. He turned and stumbled along the slag toward the trees.
Ferrous turned after him. “She won’t live, Jordan.” He strode behind him. “Leave her.”

Her clothing, laden with seawater, soaked his coat in blood. Was it hers or the rotting blood of the pool in which she had lain? He shook his head. Don’t think about the stench. He grimaced. Think about her.

Ferrous was right. She would never live.

He fell to his knees and laid her on the high grass that bordered the trees. Her dress was that of an aristocrat, finely tailored with small pearls and embroidery now torn open down to her flesh in several places. Her hair had been swept up with the sun, golden rays that now hid beneath a cloud of red death. “I will end her suffering.” Yes, that was the correct thing to do.

“For bloody sake, Jordan. You are not to indulge unless you have an inkling she may be the one. There are no exceptions to our rules. Look what happens to Ilmir when he breaks one. Who knows what calamity awaits us in London.”

Jordan’s jaw clenched, and he narrowed his eyes, refusing to look at Ferrous, who stood behind him. “This is different, and you damn well know it. I am not Ilmir, and she is not a woman I am courting. She is dying.”

Did Ferrous truly think he wanted to do this? To kill another woman was the last thing he wished. Twenty years had passed… Jordan inhaled a deep breath and blew it out between tense lips. He ran his fingers down her pale cheek and around her chin, tilting her face toward his. A slender nose, full, angelic lips, and noble cheekbones. A beauty. “To a better afterlife, dear.”

He raised her chin, exposing her long, graceful neck and faintly beating pulse. Another death…

Dash it. He stared unblinking at the slight flutter of her blood beneath her skin. Relax, Jordan. He closed his eyes and exhaled. All will be well.


Prickling pain clawed through the roof of his mouth as his two pointed teeth extended into thin slivers of bone. He stared down at her neck. She had been floating in blood and seawater. He spit on her neck, twice. His saliva glimmered as it slid down her throat to the grass below. There, that should wash away the dirt she had stewed in. Or would it? His throat tightened. Don’t lick her. Be done with it.


He leaned in and pressed his teeth to her vein. His mouth opened, saliva pooled heavily, and his tongue thickened. The pouches by his back teeth filled with poisonous blood, forcing his jaw still wider. He inhaled a jagged breath. His heart leapt and pounded, vibrating through his entire being…


Bite her, Jordan. Be done with it. Bite her.


Her faint pulse bumped against his teeth, willing him to take her as his mate. Mate? Well, that urge was pointless. She would pass just as swiftly as the others. He rolled his lip back and hissed, then pressed, slicing through her soft, salty outer skin and into her tepid blood flowing below.


This was the first time he had taken a woman when he was not passionately joined with her. Odder yet not to have her scream. To have her do nothing but lie on the wilted grass.


He swallowed. Dirt be damned, he needed to taste her and know that one essence of the life he now took. He fluttered his tongue on her smooth skin. Warm, salty blood slid thickly down his tongue. Damn. His muscles quivered as his poisonous blood streamed from his pouches and down his teeth, twisting into her veins.

The task was done. There would be no more. He would not take his pleasure in her. He would not know the feel of her flesh against his. He would never know her favorite color. This woman, like all the others who had come before, was not meant to be his. Enough!


He growledand opened his mouth wide. Her soft flesh slipped from his fangs. He pulled his head back, and their mixed blood trailed in streams down her neck and dress. His vision shifted and popped. Adrenaline mixed with power bubbled through his veins. This…this, he had missed.


This was what he was meant to be. His full elemental power at a glimpse. He tossed his hair back and then growled a dragon’s cry up to where the moon should hang in a radiant, colored vision. Yet only

the ebony fog resided tonight. There was no moon to lighten this scene. His vision rippled with detailed clarity. Ah. Indeed. This was the power that years of existence without his mate had diminished. He wanted this power back. It had been too long. In a burst of speckled light, everything changed back to somber mist. Bloody hell. His throat closed off, and his eyes burned. No! He swallowed hard, and his shoulders sagged. This was a tease. A temptation.


He closed his eyes and shook his head. He would never know more of what the Zir were than this… Death and a glimpse of the exhilarating power they were destined to have.


He inhaled and smelled her metallic, sweet blood on his lips. His tongue traced his teeth and upper lip, gathering up the enslaving essence. Sweet orange blossoms and candied cherries. His made-up version of what she should taste like. Remember her. His jaw trembled as hot blood pounded through him to his groin. His soul wanted more of her. To mate. To love. To live a lifetime of companionship.


He clenched his teeth, and his fangs pierced his lower lip. You have done enough to end her suffering. Quite enough. Let her be. He opened his eyes once more.


A shadow shaped as Ferrous stood head down and arms straight out in the air at the rocks’ edge. “Make haste. I wait no more.”


Jordan placed her head softly back on the grass. “Will scant be a moment more of pain, beauty.” He trailed his hand down her broken arm to a heavy, thick bracelet looping her wrist. He unclasped the chain and slowly rubbed the metal between his fingers. His token of her death. He tucked the jewelry in his inner coat pocket, then rose to his full height. Turning to his left, he skulked into the inky woods.


Lacy Danes made a New Year's resolution to write a hot, historical romance.


A year and a half later, she achieved her goal. She lives in Portland, Oregon, where besides writing she enjoys playing cards, chasing her kids around, and savoring a great martini with the man of her dreams all while watching the world go by.


Visit Lacy at her web site.


https://www.facebook.com/LacyDanes
Posted by 3 Partners in Shopping at 12:11 AM