The Last Protector by Stephanie Keyes Book Blitz and Giveaway 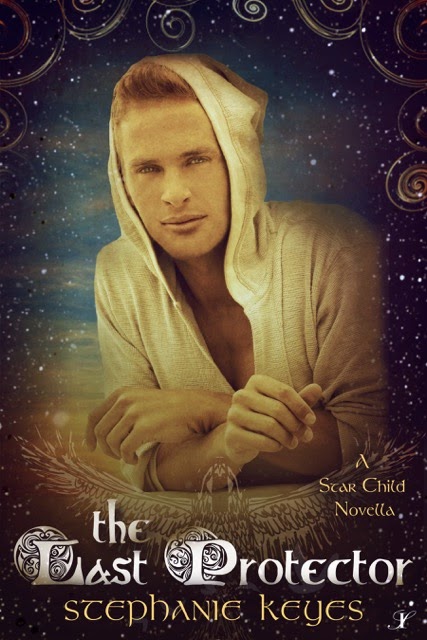 Summary from Goodreads:
Gabriel Stewart helped his best friend Kellen St. James save the world from The Scourge in the Battle of Dublin. But before that? Gabe was just an ordinary guy who kept having dreams about a little boy with black hair and green eyes—a boy he hadn’t even met yet.

And even weirder? Gabe’s mind kept replaying these images on loop of things he’d never seen. He heard voices in his head when no one was around. And he actually blew off hot Valerie Gibbons to chase after the black-haired kid in the park. What was up with that?

As Gabe searches for the truth, fate continually puts him in Kellen’s path, but will he be able to stop the Children of Danu from stealing Kellen before the battle begins? What will it take for Gabe to become The Last Protector?
*The Last Protector is a companion novella--intended to be read after the other books in the series.

Creeping along, I slipped through the gates before they closed. The exterior lights shut off. The glow from inside the mansion threw shadows across the courtyard, making everything around me creepier. If that was even possible. At least these people hadn’t invested in motion lights.

I needed to get to the window on the second floor. And how the heck did I know that? Like everything else about this trip, I just did. A tall trellis swamped with vines ran up one side of the house. That could be the ticket. I inched closer.

I'd just about made it when a raspy voice reached my ears.

Shivers ran up and down my arms as I swallowed and turned. No one. It must've come from inside the house. Ahead, a small window, one of those decorative deals, stood open. Taking slow steps, I moved toward it.

"We can take him now. Use his power to harness what I need,” Spooky Voice said.

Go, go, go. A voice or maybe my own thoughts echoed inside my brain. I didn’t have time to think

Go, go, go. The voice came back. I had to get to the second floor. Now

The wood trellis scratched my hands when I grabbed hold. Splinters pierced my skin as I scaled the wall. I had to get to the boy.

"This is crazy, Gabe." I muttered the words. “This could actually be the stupidest thing you've ever done."

I climbed to the window way faster than I thought I could. This one part of me wanted to glance back, to see if Val noticed me. I ignored it though—I needed to get to the top.

To the kid with green eyes.
Buy Links:

Keyes is the author of the YA Fantasy series, The Star Child, which currently includes The Star Child, After Faerie, The Fallen Stars, and the soon to-be-released finale, The Star Catcher (November 2013), all from by Inkspell Publishing. Mrs. Keyes is hard at work on a new YA Paranormal Romance.
Author Links:
Website│Goodreads│Twitter│Facebook│Tumblr│Pinterest