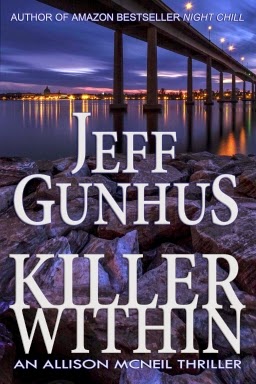 Arnie Milhouse is a murderer. A millionaire with dozens of kills in his past and no one the wiser. But when his name surfaces in connection with the death of a D.C. call girl, Arnie knows it’s only a matter of time before the FBI puts the pieces together. As he makes plans to disappear and leave his life in Annapolis behind forever, he meets a beautiful, mysterious woman who takes an interest in him. The perfect final victim. He can’t believe his luck.

Only luck has nothing to do with it.

Allison McNeil has returned to Annapolis, a city that she promised herself she would never come back to, not while the cruel memories of her time at the United States Naval Academy still haunt her. But she’s willing to do just about anything to get close to Arnie, even if it means having to face down the demons of her past. Her plans work and soon she and Arnie find themselves locked in a dangerous dance of seduction and betrayal. But Arnie isn’t the only one who carries a secret and the dark truth about Allison McNeil makes a final confrontation between them inevitable. Neither of them know it, but they're on a collision course that only one of them will survive.

I just finished reading, " A Killer Within, An Allison McNeil Thriller",  and I really liked it. I have read other books by author Jeff Gunhus and I liked all of them. I loved the storyline and the characters were really great. This book is full of suspense, action, mystery and twists and turns. I had to keep reading until I found out what happened at the end. Anyone who loves a mystery with other themes will love this book. I give this book a 5/5. I was given this book by the author and Tomoson and all opinions are my own.
Posted by 3 Partners in Shopping at 9:04 PM