Society of Benevolent Strangers by L. A. Parker Virtual Book Tour and Giveaway 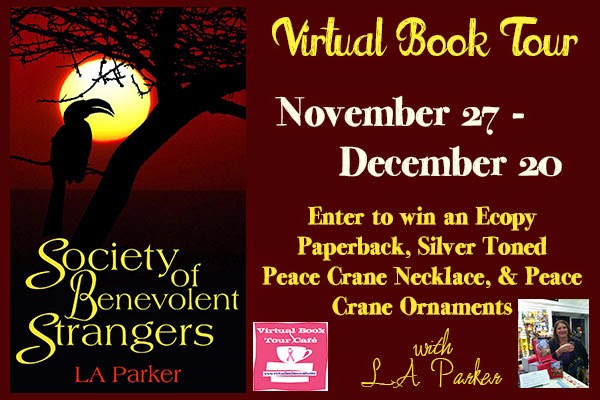 
Dr. Kathryn Hastings felt the tremor in her fingers and hastily dropped the scalpel back on the tray. Her career as a neurosurgeon had just ended. One slip and her patient would have come out of surgery a different man than when he went in.


On the advent of her thirtieth high school reunion, with her life at a crossroads, Kate finds herself dwelling on the past and choices she made--particularly those having to do with Clayton Beech. Desperately needing to find a new calling and to correct past mistakes Kate sets out on a journey that takes her from North Carolina to London, from Paris to Kenya.


As the Land Rover climbed to the top of a rise, Kate caught her first glimpse of Lake Baringo. It was smooth, caramel colored from muddy run-off, and glistening in the dawn light. The sky was splashed purple and rose-pink above the Laikipia Escarpment as the sun crept over the cliff’s edge.


“Oh, Clay, stop!” Kate gasped. She was pulling at the buckle of her seatbelt. “Please, let me see it.”


Clay stopped the truck, feeling like a jerk after the previous day. His feelings of betrayal had not lessened—she should have waited for him—but he did not enjoy making her miserable. Kate had her door open in a second and was at the edge of the road before he could climb out.


Bobbing up onto her toes, Kate tried to get a better view over the tall grasses and lush plants—flourishing from the recent rains—that grew between the edge of the road and the steep slope leading to the water below. She edged closer to the slope, looking for a better vantage point.


“Don’t step in the brush with those flip-flops,” Clay warned, coming up beside her. “Watch out for snakes and scorpions.”


“Come here.” Clay held out his hand and she looked at him, her eyes narrowing warily before accepting. Automatically, his thumb rubbed over hers, the contact was electric, and he almost pulled her into his arms, his resolve to keep her at a safe distance momentarily failing. He could have easily taken her without much ceremony in the dusty track, but mentally, shook off the impulse. Instead, he pulled her to the front quarter panel of the vehicle.


“Okay, let’s see if I can still do this.” He grinned then pushed her against the side, put his hands on her hips, and emitted a small grunt as he lifted her up onto the hood until she was perched on the edge. “You weigh about the same as I remember, maybe less. Can you see now?”


Kate put her hand on his shoulder as he turned to look out across the lake with her. “Yes, I can see now,” she spoke softly in wonder at the scene before her.


A small flock of pale pink flamingos rose from the water and swirled past them before settling a few hundred yards north from where they started. “I thought they would be pinker.”


“They are at Bagora. Baringo is a fresh water lake, Bagora is a soda lake and that makes them bright pink.” Clay smiled then pointed northeast toward the middle of the lake. “Look, over there. See the islands? The big one is Ol Kokwe and beyond that is Samatian Island. There are volcanoes on the north edge and geysers from the geothermal activity. A few pods of hippos are scattered around. The lake is still muddy from the rains.”


“Hippos? Where?” Kate scanned the surface of the water but saw nothing disturbing the polished bronze surface.


They watched as the sun climbed higher, burning off the purples, pinks and reds of sunrise. Clay pointed out a lone Verreaux eagle soaring overhead looking for breakfast. Colorful finches chattered in the fig and acacia trees behind them as a black-faced monkey watched the couple with curiosity.


They enjoyed the peacefulness of the morning until Clay heard the rumbling of a large truck in the distance. “We’re going to have to get moving, sounds like they pulled that truck out of the mud.”


Kate started to slide off the hood, holding onto Clay’s shoulder for balance.


“No, it’s Africa.” Kate smiled as she stared into the depths of his blue eyes for a moment, and then sighing, she looked out over the beautiful lake one last time. “I think I’m going to love Africa.” 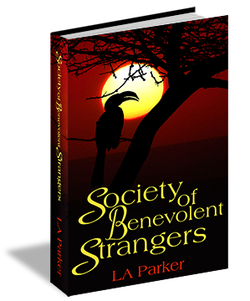 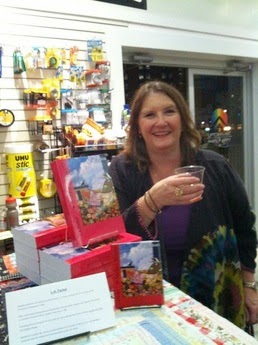 LA Parker Bio
Between stints as a lion tamer and exotic dancer, LA Parker earned a degree in Art History from the University of Delaware.
After a harrowing experience excavating ancient ruins along the Amazon, she earned a second degree in Computer Science from East Carolina University.
Dabbling in the art of lying for fun and profit, she has published three works of fiction: Against the Grain, Stella's Sheets and Society of Benevolent Strangers.
Settling for a quieter life, LA is currently residing in North Carolina with her husband, son and dog, Tony, Zach and Max the Bandit, where she is happily dreaming up more fantastical and phenomenal lies for your entertainment.
Links
Facebook: www.facebook.com/LAParker
www.facebook.com /SBSaNovel
Goodreads:http://www.goodreads.com/search?utf8=%E2%9C%93&query=society+of+benevolent+strangers
Tags: contemporary romance, second chances, Kenya, Aid Workers, hope diamond, peace crane, Lake Baringo

a Rafflecopter giveaway
Posted by 3 Partners in Shopping at 10:03 AM