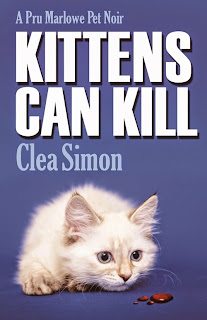 The dead don’t keep pets. So when animal behaviorist expert Pru Marlowe gets a call about a kitten, she doesn’t expect to find the cuddly creature playing beside the cooling body of prominent Beauville lawyer David Canaday. Heart attack? His three adult daughters angrily blame drug interactions, feline allergies—and each other. And begin to feud over their father, his considerable estate, and that cute ball of fluff. While the cause of death is pending, each sister has an axe to grind—with arguments that escalate when David’s partner reads out the will.
Pru’s special sensitivity to animals, which caused her to flee the cacophony of Manhattan for the quiet Berkshires, adds further problems. The local vet is overwhelmed as the animal hospital’s money runs out. There’s a needy Sheltie and some invasive squirrels, too. But the dead man’s kitten, his former partner, and his troublesome family keep drawing “wild-girl animal psychic Pru back in. Despite the wry observations of her trusty tabby Wallis, now the wrongfully accused kitten’s guardian, and the grudging compliance of her cop lover, this may be one time when Pru can’t solve the mystery or save the kitten she wants to believe is innocent. A single witness knows the truth about that bright spring morning. How far can Pru investigate without risking her own hidden tale? 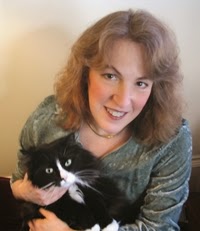 A recovering journalist, Clea Simon is the author of 1 ​7​ mysteries and three nonfiction books. Parrots Prove Deadly is the third in her Pru Marlowe pet noir series. She lives in Somerville, Massachusetts, with her husband Jon and their cat, Musetta, and can be reached at

This is a giveaway hosted by Partners In Crime Virtual Book Tours for Clea Simon & Poisoned Pen Press. There will be one winner of 1 Box of Poisoned Pen Press books including Kittens Can Kill by Clea Simon. The giveaway begins on June 1st, 2015 and runs through June 3rd, 2015.

Pru Marlowe is a animal behaviorist expert. When she is called about a kitten she finds David Canaday a well known lawyer dead. He has three grown up daughters who are blaming each other. Then David Canaday's partner reads his will and they fight even more. This book was full of suspense and action. I was kept guessing until the end. I really liked the story line and the characters were great. I give this book a 4/5. I was given this book for the purpose of a  review and all opinions are my own.