A Crying Shame, The Uninvited, and Them by William W. Johnstone Virtual Book Tour and Giveaway 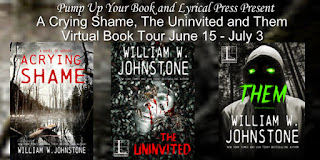 A Crying Shame, The Uninvited & Them


Each night they emerged from the murky depths of the swamp to claim another victim—a lovely, innocent, fertile female who would be carried off in huge hairy arms and plunged into a nightmare world of terror. Her screams would echo in the darkness. Her face would contort in the throes of horror and pain. But once taken, each became a mother of an unholy child, a link in the chain of madness and evil, a spawn to carry on the devil’s name!


It was like any other spring day in the quiet, peaceful community of Lapeer Parish, Louisiana. But for Sheriff Vic Ransonet it was the beginning of a nightmare. People were disappearing without a trace. Animals were being eaten right down to the bone. Lush fertile fields of crops were being stripped bare. But the sheriff knew the evil that lurked in the barns, sheds, and homes of the sleepy parish. He had seen the creatures with his own eyes. He had heard the clicking of their jaws, the signal that they were on the move to feed their ravenous appetites. And if he couldn’t stop them, then every man, woman, and child would die, and Lapeer Parish would be wiped off the map.


The Uninvited is available for pre-order at  Amazon, B&N,  and Google Play


Jake Silver was a teenage misfit, a misunderstood genius who’d been cruelly tormented by his own sadistic father and others in his little Louisiana hometown. Jake was the perfect disciple for Them.


They’d come from another world; disembodied beings who understood Jake’s need for revenge.  .  .They would offer Jake the power to finally take it.  .  .All they wanted in return was his help in bringing others of their kind to Jake’s world.


It begins so slowly, so innocently, even Jake didn’t see the danger.  .  .until it was too late to realize that he had helped unleash a devastating power in the universe–and opened a gateway for a horrific struggle between mere human beings and.  .  .


Them is available for pre-order at  Amazon, B&N,  and Google Play


William W. Johnstone was born in Southern Missouri, the youngest of four children. Raised with strong moral and family values by his minister father, and well-tutored by his school teacher mother, Bill quit school when he was fifteen. He was kicked out of the French Foreign Legion for being under age and joined the carnival. But still valuing his education, he returned home to finish his high school education in 1957.


He went on to work as a deputy sheriff, did a hitch in the army, and began a career in radio broadcasting, where he worked daily on his verbal and storytelling skills for the next sixteen years on the air. Much of his knowledge of the early frontier began from listening to family experiences told to him by his Grandparents.


His love of animals is displayed in many of his books as well as finding several Huskies and Malamutes roaming freely around his home. As an avid gun and knife collector, hours of research are devoted to the types of weapons commonly used during the eras of his writings.


One little known fact, is his love for music … from “rockabilly to classical”. Bill has written and recorded several songs which may be released for his fans in the future.


He started writing in 1970, but it wasn’t until late 1979 when The Devil’s Kiss was published that William W. Johnstone became a full-time writer. Since that time he has written over two hundred books in a variety of genres including action, suspense, western, science fiction, and horror. Two of his books, Eagle Down and Dagger, were written under the pen name of William Mason.


To the true William W. Johnstone reader, he is a best-selling author admired for the great diversity in his writing talents. Though most known for his western adventures, Johnstone was also a visionary writer. His prophetic stories within his Ashes Series, Code Name Series, and his science fiction books, predicting the Gulf War and the political climate we live in today, was ahead of its time when it was written.


Guest blogging at Fiction to Fruition


Guest blogging at The Book Czar


Review of Them, The Uninvited and A Crying Shame at A Room Without Books is Empty


Review of Them, The Uninvited and A Crying Shame at FUOnlyKnew