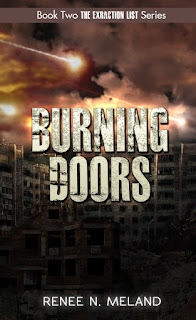 
Not that he would’ve had anywhere to drive to. When he was fifteen, America was one of the poorest countries in the world, and its’ citizens took their hatred of that fact out on each other through gangs and violence.


Children barely tall enough for carnival rides peppered the streets selling drugs (or themselves) so they could buy their next meal.


Every night on the news, Cain watched as an angelic blonde woman who lost her own child swore she’d end it…


She assaulted America’s televisions with praise for the Parental Morality Law: a set of rules that spells out exactly what it takes to be a parent in the eyes of the government, and the consequences of breaking those rules. He prayed every night that she’d come to rescue him before his father took off his belt again.


Before she could save him, Cain faced a fatal choice…


Fight back or die on the basement floor.


Now on the run, he finds himself being hunted by a police officer with his own special brand of torture. Before he can save even a handful of the children who have been swept up in the gang life, he must first cover up not one, but two murders. His father’s and one committed by a teenage madam who is either the love of his life, or his final undoing.


As he feels himself being pushed further and further to the edge, Cain realizes that surviving his father was just the beginning.


The first time I killed someone, it was an accident. Though I guess it was the kind of accident that happens when you squeeze your hands around someone’s neck for too long, or when you shove someone who is standing too close to the edge of a building. In my case, I accidentally killed my father when I beat him to death with a pipe.


He had set me up that night, I’m sure of it. I was always careful to leave the TV volume down so I wouldn’t be caught. But when I flipped the power on that night, the news roared. The woman I wanted to see was there, giving a speech like always, but her voice came out with the force of thunder. Sweat drenched my body when I heard the door to my parents’ upstairs bedroom fly open and hit the wall. The foundation shook and so did my limbs. I sat frozen in a seated position as I heard his footsteps. All I could focus on were his shiny patent leather shoes coming toward me. Even in the middle of the night, he took the time to slip them on.


I could smell him before I even saw his feet. He constantly stunk of mouthwash and old cologne; it was some putrid mix of sandalwood and beach vacations that we would never take. He cackled as he stepped toward me, so the minty air from his breath reached me before his hand did. I felt my head hit the floor before I felt the familiar sting in my cheek.


“You’re so stupid. You really think you’ll ever leave here? Where do you think you’re going to go, huh? You need me. She hasn’t come for you and she never will!” He kicked me in the side with his foot.


My stomach clenched from the impact.


I usually kept quiet when he hit me. At most, I would agree with whatever he was saying to stop him before he did real damage.


No matter what I said, or didn’t say, the blows would keep coming. My mother was always conveniently upstairs, but no one can tell me she couldn’t hear the snap of his belt or the furniture rattle as he shoved me into it.


That night was different. Maybe it was watching the woman from the television, or maybe it was the way his smile stretched across his face as he struck me, I don’t know. But when he was finished and heading back upstairs, I spat towards him.


My cheeks burned as I did it. In fact, my whole body felt like it was on fire. But I’d be lying if I said I wished I could take it back. Even when he turned, eyes wide when he noticed the wad of saliva glistening on the concrete floor, I didn’t regret it one bit.


I may have even cracked a smile.

Renee N. Meland is an avid writer and reader of speculative fiction. She and her husband reside in the beautiful Pacific Northwest. When she is not writing or being a devoted doggy-mom, she is gardening or learning a new recipe.


She is currently working on the rest of the books in The Extraction List Series. Other upcoming projects involve reincarnation, and a house filled with people who all have something to hide.