Married in Montana by Kirsten Osbourne Book Blitz and Giveaway 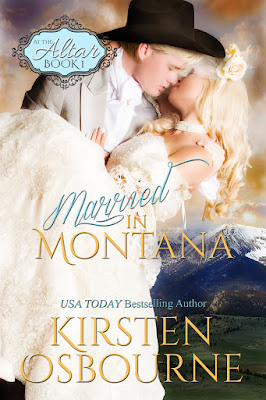 Savannah is tired of the dating scene, even though she wants to get married and have a family. She knows her mother will never move on with her own life as long as Savannah is single. Savannah goes to see a matchmaker, specializing in setting up couples who meet at the altar. At first, she thinks Scott is a dream come true, but his blundering soon makes her crazy.

Scott, a Montana bison rancher, doesn't have time to find a wife. His work is all-encompassing. Besides, he tends to have a hard time getting women to go out with him more than once. When he runs into a matchmaker he's known all his life, he tells her about the problems he's had to see if she can help him. When he meets Savannah at the altar, his heart stops for a moment. She's exactly what he's looking for. Will their diverse backgrounds keep them apart? Or will they be able to work through their differences to make their marriage a loving relationship?

She looked at her husband. "A week?"

"On one condition," he said, not liking the idea of waiting but not willing to start their marriage on the wrong foot by insisting on his marital rights.

"I get to try to convince you otherwise."

She smiled. "So you're going to constantly be asking me for sex?"

He grinned. "Oh, I'll be a little more subtle than that." He brought her hand to his lips, kissing the palm, his tongue sneaking out to touch her skin.

"I see." She nodded. "That's fair. I think it's a perfect compromise."

"Is there a spare room I can use until our week is up?"

He frowned at that. He would have an easier time convincing her if they were sharing a bed, but he could see where that would give him an unfair advantage in their little game. "Yes, you can have any of the spare rooms you'd like."

He took the change of subject in stride, talking about the huge spread and the men who worked for him. "I have a foreman, but I'm out there sweating and working every day right along with my men." He eyed her. "Do you ride?"

She shook her head. "No. I wanted to when I was a girl, but after my father died, we just didn't have the money for any extras. Mom worked, but it wasn't the same as both of them working."

She heard a buzzing from her purse, and opened it, taking out her phone. "My mother's texting me." She handed him the phone so he could read the message for himself.

Scott laughed, reading the message aloud. "'Has he killed you yet? If he has, please don't answer this. If not, please give me a call so I know you're all right.' I think you should call her." 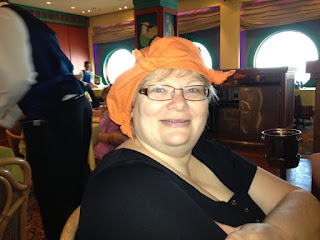 USA Today Bestselling author, Kirsten Osbourne, has always known she would eventually be a writer.
She penned her first book in a spiral notebook when she was ten and has been writing ever since. As Kirsten she writes both historical and contemporary romance, with a humorous flair. As Morganna Mayfair, she ventures into the realm of paranormal historical romance. Kirsten lives in Texas with her husband of over fifteen years, their son, and a crazed mutt. She invites you to join her in her world of fantasy and make believe where there is always a happily ever after at the end.