Letters from My Father's Murderer by Laurie A. Coombs Book Tour and Book Review and Kindle Fire Giveaway 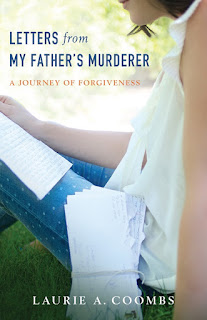 Letters from My Father’s Murderer: A Journey of Forgiveness (Kregel, June 2015)
When her father was murdered, Laurie Coombs sought justice and found it.
His murderer now serves two life sentences with no possibility of parole. Yet, despite the swift punishment of the killer, Laurie found herself increasingly full of pain, bitterness, and anger she couldn’t control. After coming to faith, she realized she was being called to seek something infinitely more difficult than justice: forgiveness.
This is an extraordinary true story of grace, mercy, and the redemptive power of God to change lives. The reader is swept along with Laurie as she undergoes the life-changing transformation of becoming a Christian. As she studies Scripture, seeing God redeeming losses and healing deep wounds time and time again, she starts to understand that her own healing would require her to love her enemy in a real, practical way.
Using her incredible correspondence with the man who killed her father, Laurie reveals a compelling journey of transformation, not only in her life, but in the lives of those whom many would call irredeemable.
Letters from My Father’s Murderer is for any audience Christian or secular who
—Craves freedom from the inability to forgive those who’ve caused them harm
—Wants to hear testimony of God’s power in our obedience
—Has experienced pain through other’s sin against them
—Needs to know healing is always possible
The real story here is not primarily about murder and its fallout, but rather about redemption and how far it can reach.
Learn more and purchase a copy at Laurie’s website.

Laurie A. Coombs is a passionate writer and speaker on the issues of forgiveness, redemption, and the hope that is found in Jesus. Her story was featured in Billy Graham's new film, "Heaven." She is a featured writer and blogger for iBelieve and Crosswalk. Laurie and her husband, Travis, make their home in Nevada along with their two daughters.


Can God heal the deepest wounds and redeem what seems unredeemable? Laurie Coombs experiences God's transforming and redemptive power in her new book, Letters from My Father's Murderer. When her father was murdered, Laurie Coombs and her family sought justice―and found it. Yet, despite the swift punishment of the killer, Laurie found herself increasingly full of pain, bitterness, and anger she couldn’t control. It was the call to love and forgive her father’s murderer that set her, the murderer, and several other inmates on the journey that would truly change their lives forever.

Join Laurie in celebrating the release of Letters from My Father's Murderer by entering to win a Kindle Fire!

One grand prize winner will receive:
Enter today by clicking the icon below. But hurry, the giveaway ends on July 20th. The winner will be announced July 21st on Laurie's site.

My review;
When I began to read author Laurie A. Coombs book called "Letters From My Father's Murderer", I was not sure how anyone could deal with the kind of horror that she had to. It was an unbelievable story of faith, family, hope and love. It is hard enough to find things out about our loved ones that we never thought possible. It is truly hard to be able to forgive someone that hurts someone that you love. I am sure that there are not too many other people that could do what Laurie A. Coombs did. Not only did her faith help her get through horrible events but it has helped others deal with their losses. I give this book a 5/5. I was given this book by Litfuse Publicity Group for the purpose of a  review. All opinions are my own.
Posted by 3 Partners in Shopping at 12:23 AM