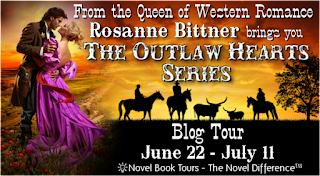 Hunted by the law and haunted by a brutal past, Jake has spent a lifetime fighting for everything he has. He's never known a moment's kindness...until fate brings him to the one woman willing to reach past his harsh exterior to the man inside. He would die for her. He would kill for her. He will do whatever it takes to keep her his.

Spanning the dazzling West with its blazing deserts and booming gold towns, Jake and Miranda must struggle to endure every hardship that threatens to tear them apart. But the love of an outlaw comes with a price...and even their passion may not burn bright enough to conquer the coming darkness. 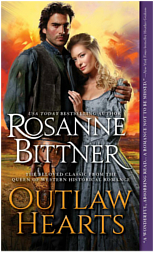 He closed his eyes and stretched out beside her, kissing her hair.  “I’m no good, Randy.  There’s no future with a man like me.”

She ran a hand inside his shirt and leaned closer to kiss his chest.  “We don’t know that, yet.  And you are good, Jake.”

He wrapped his fingers into her hair and rolled on top of her.  “If I was really good, I would never have let things go this far with you.  You mean too much to me, and if you stay with me you’re going to suffer, Randy.  You’ll always be running, always wondering when someone might find out who I am and come gunning for me.  Life is hell with me, believe me –“

She touched his lips again.  “Tell me you can take me to Nevada now and just leave me there and ride off without me.  Can you do that, Jake?”  His only reply was to meet her mouth in a savage kiss. 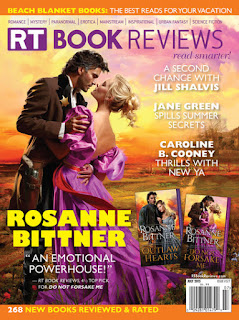 "Veteran romance author Bittner revisits the characters of Outlaw Hearts as a much older couple in this captivating romance...a refreshing view of enduring love that survives the dangers of the Old West." - Publishers Weekly

"More than two decades in the making, Bittner's sequel to Outlaw Hearts is an emotional powerhouse! The strong flavor of the Wild West combines with a beautiful love story, creating a true saga of the era. This epic tale of an outlaw lawman and the woman who tamed him has everything Bittner fans expect and more. This classic historical western is destined for the "keeper" shelf. 4 1/2 Stars, Top Pick!" - RT Book Reviews

Fate brought them together. His past may tear them apart.

Miranda Hayes' life was changed the day she faced down infamous gunslinger Jake Harkner...and walked away with his heart. Their fates have been
intertwined ever since. Hunted by the law, fleeing across a savage land, their desperate love flourished despite countless sorrows. Now, twenty-six years later, their family has finally found some measure of peace...balanced on the knife's edge of danger.

Jake has spent his years as a U.S. Marshal atoning for sins, bringing law to the land he once terrorized. But no matter how hard he fights the demons of his brutal past, the old darkness still threatens to consume him. Only Miranda keeps the shadows at bay. But when outlaws looking for revenge strike a fatal blow, Jake risks losing the one woman who saw past his hard exterior and to the man inside.

He always knew there'd be the devil to pay. He just never realized he might not be the one to bear the ultimate price.


Do Not Forsake Me - 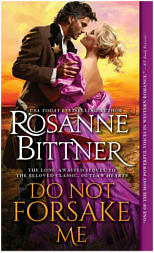 Randy’s stomach fell a little watching him strap on the guns. She never quite got over the dread of what each new day could bring. … He tied the holsters to his thighs … and pulled on his leather vest, his badge already pinned to it.

Randy sighed.  “I can already see a dark mood setting in, Jake.”

“And I don’t like having to look at Marty Bryant. I want to kill him and I can’t.  Maybe I’ll get lucky and he’ll give me an excuse.”  He opened the bedroom door and started out.

“No. I’ll just grab a hunk of bread on the way out and get a cup of coffee down at the jail.”

“Wait,.”  Randy walked closer and stood on her tiptoes to kiss him.  “I’m telling you, I don’t have a good feeling about this.  Lloyd would understand if you want to get him.”

He turned away.  “Just stay in the house today, will you? … That means even if you hear shooting.   Don’t you dare go running out into the street, you hear me?  If you’re needed, someone will come and get you.”

She felt the tears wanting to come.  “I promise.”  She watched him leave, then closed her eyes and turned away, praying the same prayer she prayed every single morning.  “God, be with him.” 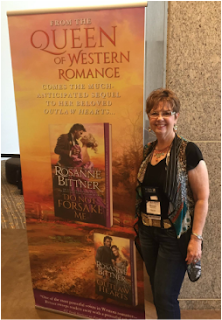 Aptly title THE QUEEN OF WESTERN ROMANCE at the 2015 RT Convention, USA Today bestseller and award-winning novelist Rosanne Bittner is highly acclaimed for her thrilling love stories and historical authenticity. Her epic romances span the West—from Canada to Mexico, Missouri to California—and are often based on Rosanne’s personal visits to each setting.

Rosanne's stories are deep love stories, often family sagas told as a series. It is the hero and heroine’s love that holds them together through the trials and tribulations of settling America’s western frontiers. Rosanne absolutely love the Rockies, the Tetons, the Sierras, and the wide-open plains, prairies and desert land west of the Mississippi. In her books, she strives to tell the truth about the settling of the West and how it affected our American Indians, as well as the gritty depth of what our brave pioneers suffered in their search for free land and a better life.

My review of "Outlaw Hearts".
I just love author Rosanne Bittner. I just finished reading "Outlaw Hearts" part of the Outlaw Heart series. Jake Harkner is a gunslinger with a past. He is a man who is hunted by the law and has secrets to hide. Miranda Hayes is a woman who has lost it all and is now alone. She has no idea what she should do when she meets Jake. They fall in love even as they both fight it as much as they can. This is their story. Will love be enough? I give this book a 5/5. I was given this book for a review and all opinions are my own.
Posted by 3 Partners in Shopping at 12:23 AM