Crazy for the CompetitionHope Springs # 2


The road to trouble is paved with sweet temptation…


Always the rebel in her ultra-conservative family, Quinn Sakata dreams of quitting her dad's real-estate business and restoring the old Mountain Ridge Bed and Breakfast in her hometown of Hope Springs. Except that Quinn's not the only person bidding on it. Worse still, her competitor is her high school crush, Heath Brantley, who is all kinds of ripped, tattooed hotness…


So much for her “nice, conservative boys” rule.


Heath has his own reasons for bidding on Mountain Ridge, and he won't give in without a fight—even to the red-lipped hottie with a sailor's mouth. But when their rivalry shifts into an unexpected zing of chemistry, Heath realizes he’s in deep trouble. Because it’s inevitable that emotions will get involved, and he needs to keep his eyes on 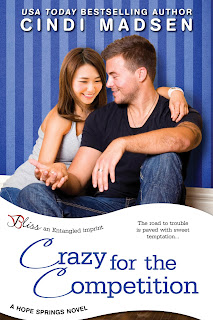 the prize before they both get hurt.

Excerpt
When they reached the creek, he found a place where the water was about shin-deep with lots of rocks to cross— mostly for Quinn, because his boots would keep his feet dry as long as it didn’t go over the top of them.
She bounced from rock to rock, having to jump when her strides weren’t long enough to follow the path he’d taken.
“Watch that last one,” he said. “It’s—”
She leaped onto it and her foot slid out from under her. She fell backward, barely getting her hands down to semi- catch herself as she hit the water with a small splash.
“Slippery,” he finished. He took a step back into the stream, sure she was about to freak about getting her clothes wet. All he could really do now was make an attempt at damage control. “You okay?”
“I’m fine. Help me up?” She extended her hand, and he took hold of it. He was surprised she’d asked for help. Usually she was so—
She yanked on his arm and swept her leg under his. He landed hard on his butt and she erupted in laughter. “That’s for throwing the snake at me.”
For a moment he didn’t move, simply sat and gaped at her smug expression as cold water seeped into his jeans. Her impressive takedown move and laughter were so completely at odds with the prissy reaction he’d expected that it took his brain a few seconds to catch up. “Nice ninja skills.”
She jumped up and grinned. “It’s in the blood, you know. That, and my father forced my sister and me to train in aikido.”
He pushed to his feet and shook water off his hands. “So that makes you...”
“I’m Japanese. With or without the aikido. And no, I won’t make you Japanese food, and I especially won’t make you Chinese food—just putting it out there now, because guys tend to ask, like, first date. Not that this is a date. Obviously.”
“Obviously,” he said, not bothering to mention it was the closest thing to a date he’d been on for a while. “And I wouldn’t dream of asking you to cook for me. You’d probably poison the food or sweep kick me as I was eating and then stab me with your chopsticks.”
She laughed again, more happy than evil sounding this time, and it echoed through his chest.
“And you don’t ask me if I make good moonshine.” He heaved a sigh. “I get so sick of girls asking me that. I’m good for more than providing booze, you know.”
She laughed again, and he leaned in as if he were about to divulge a huge secret. “Actually, I’ve got a really good batch in my bathtub right now, so maybe you should ask.”
“Then I guess I’m coming over tonight.”
Suddenly he realized how close they were and the way he had to work harder for every one of his breaths. Quinn coming over tonight sounded good—guess he’d have to figure out how to make moonshine after all.
Link to Follow Tour: http://www.tastybooktours.com/2015/05/crazy-for-competition-hope-springs-2-by.html
Goodreads Link: https://www.goodreads.com/book/show/23113981-crazy-for-the-competition 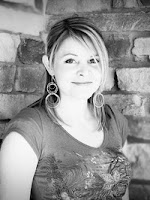 
Cindi Madsen is a USA Today Bestselling author of contemporary romance and young adult novels. She sits at her computer every chance she gets, plotting revising, and falling in love with her characters. Sometimes it makes her a crazy person. Without it, she’d be even crazier. She has way too many shoes, but can always find a reason to buy a new pretty pair, especially if they’re sparkly, colorful, or super tall. She loves music, dancing, and wishes summer lasted all year long. She lives in Colorado (where summer is most definitely NOT all year long) with her husband and three children.
Author Links: Website | Facebook | Twitter | GoodReads
Website: http://cindimadsen.com/

a Rafflecopter giveaway
Posted by 3 Partners in Shopping at 12:34 AM