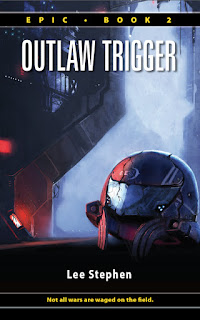 They say every man has a breaking point-every man can be pushed off the edge. Scott Remington entered EDEN with the heart of a lion. He forged glory in the furnace of war. But on the heels of dawn, darkness awaits. Only when stretched to the limit will a man truly learn who he is. That limit is about to be breached. Lines will be crossed. Sides will be chosen. And faith will be put to the test. Will the righteous prevail?

Born and raised in Cajun country, Lee Stephen spent his childhood paddling pirogues through the marshes of South Louisiana. When he wasn’t catching bullfrogs or playing with alligators in the bathtub (both true), he was escaping to the world of the imagination, creating worlds in his mind filled with strange creatures and epic journeys. This hasn’t stopped.

Now a resident of Luling, Louisiana, Lee spends time every day delving into the world of Epic, the science-fiction series that has come to define him as a writer and producer. Alongside his wife, Lindsey, their sons, Levi and Lawson, and their dog, Jake, Lee has made it a mission to create a series that is unique in its genre—one unafraid to address the human condition while staying grounded in elements of faith.

For those of you who requested these, you will get them shortly.

Where to buy the book:
Amazon
Barnes & Noble

I just finished reading "Outlaw Trigger" the second book in the Epic series by Lee Stephen. I also have read the first book  in this great series and I liked both of them. Scott Remington is at a man who has to make a decision. What way will he go?  What is he going to do? He was a great man in Eden during a war. What happens after his decision is made? Will anything ever be right or the same again? Will anyone help him? His  story continues in the next book called "Hero" and I cannot wait to read it. I give this book a 4/5. I was given this book for the purpose of a review and all opinions are mine.


a Rafflecopter giveaway
Posted by 3 Partners in Shopping at 11:40 PM