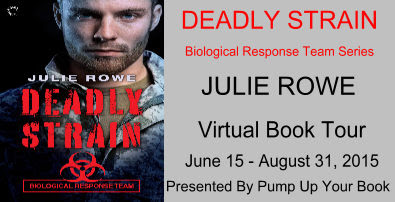 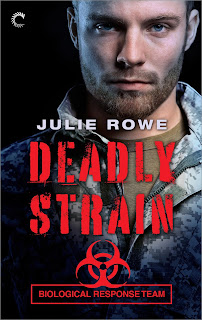 
Discuss this book in our PUYB Virtual Book Club at Goodreads by clicking:

Major Grace Samuels, a trauma surgeon deployed to Afghanistan, spends her life helping her fellow soldiers overcome disease and combat injuries. But her own wounds are harder to heal. Wracked with guilt over the death of a fellow soldier, she finds comfort in her only friend and appointed bodyguard, weapons sergeant Jacob “Sharp” Foster.

Sharp feels more for Grace than a soldier should, more than he wants to admit. When the team discovers a new, quick-to-kill strain of anthrax, he tries to focus on the mission to find its source. He knows he can help Grace defeat her demons, but first they must defeat the deadly outbreak.

Sharp is Grace’s most loyal ally, but in close quarters, he starts to feel like more. She can’t watch someone else she cares about die—but she might not have a choice. The closer they get to finding the source of the strain, the closer it gets to finding them.

The battle line between good and evil runs through the heart of every man. —Aleksandr Solzhenitsyn

Sharp watched Grace rush away for about two seconds too long.
“Do I need to replace you with Runnel?” Cutter asked.
He jerked his head around to stare at his commander. He’d thought Cutter had been briefing the rest of the team. “No.”
Cutter stood with his arms crossed over his chest and his feet apart. “Then pull your tongue back into your head. You’re damn near panting after her.”
“Not f*** likely. She’s just the only person on this base who can beat me in poker. If something happens to her, I’ll have nothing to do for the next month,” he said. “Besides, something’s not right. She’s been off her game since Marshall decided to be an ass. She’s our number-one asset. I’m worried.” The way he’d found her the other day, damn near passed out, shaking and hyperventilating like she was about to fly apart… It had hit him—a sucker punch to the gut. She was reliving something awful.
Post-traumatic stress disorder.
How many guys did he know who lived with PTSD? Ten, twenty, fifty?
What was Marshall’s connection? Something he’d done or said had set off a bomb in Grace’s head.
Even weirder, Marshall hadn’t liked it when Sharp wouldn’t leave Grace alone with him.
What the hell had Grace been involved with that earned her the dislike of a career military man who normally didn’t give a rat’s ass about what a doctor like her might be doing or not doing?
“Still, watch yourself. Word around the base is, he’s got a hate on for the doc and you got in the way.”
“What do you know, Cutter?”
“Nothing specific. Marshall hasn’t talked, but his attitude toward the doc is clear. He hates her guts.”
Cutter was right, Marshall’s face had been twisted by disgust and hostility as he stared at her the night he got between her and the colonel. What had happened to cause it? Whatever it was, Sharp wasn’t going to let anyone hurt her. She worked just as hard and long at training their allied troops as the A-Team did. And she was good.
“Sharp.” Cutter’s voice had a wary edge and he took a step closer. “Be careful, man. I like the doc, too. Hell, the whole team likes her, but you and I both know falling for someone while on deployment is a mistake.”
“Preaching to the choir here, boss. I might enjoy the view on occasion, but there’s a line I have no interest in crossing.”
They’d both watched as a former team member fell hard for a woman he’d met while overseas. The relationship disintegrated within weeks after he’d been reassigned. It had damn near broke him, and he’d left the military altogether.
“I respect her,” Sharp told his commander. “She’s smart and she’s worked her ass off this last year. I also think Marshall has some kind of vendetta against her. The look on his face the other night…” Sharp shook his head. “He’d have killed her if he could have. She belongs to us.”
Cutter was silent for a couple of moments, his gaze steady on Sharp’s face. Finally, he angled his head toward the knot of soldiers and gear. “Come on, no one is going to bother her now. Marshall needs her. Get your shit together.”
Cutter had one thing right. He needed to keep his focus on the mission. Sharp followed the other man, but there wasn’t much for any of them to do, since they were always ready to move out on a moment’s notice. Every man on the team had developed the habit during training and had only refined it since. One of their instructors used to say that an unprepared soldier was a dead soldier.
Sharp joined the rest of his team, double-checked his weapons, pulled on his battered gear and bio-suit and got out of the way. Focus.
Cutter was talking with Bart, one of their communications guys, when Colonel Marshall walked in a few minutes later with another half-dozen soldiers behind him and headed straight for the Special Forces group.
“Cutter, storm coming at twelve o’clock,” Sharp informed him quietly.
By the time Marshall came to a stop, the entire A-Team was standing at attention.
“Sir,” Cutter said with a salute. “The go-team is ready, sir.”
“Where’s that damn doctor?”
“She’ll be here in six minutes, sir.”
Marshall grunted. “You’re taking these men with you on this mission. Two additional medics, Yanik and Anderson, and four of my infantry for security. Your mission objective is to assist Major Samuels.”
For the first time since their arrival two weeks ago, Marshall was actually helping a situation rather than shitting all over it.
“And make sure that b**** doesn’t screw up,” Marshall added. “I want the men on that patrol back in one piece. Understand?”
“Yes, sir.”
The team saluted and Marshall stalked off like he was Patton or something.
“So much for that guy not being a tremendous bag of d***,” the team’s second in command, John Leonard, said in an undertone. 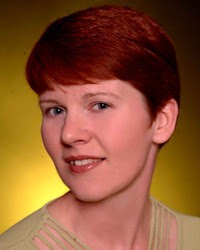 Julie Rowe’s first career as a medical lab technologist in Canada took her to the North West Territories and northern Alberta, where she still resides. She loves to include medical details in her romance novels, but admits she’ll never be able to write about all her medical experiences because, “No one would believe them!”.