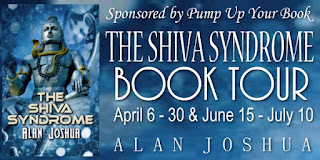 
Beau Walker, parapsychologist and reluctant empath, is coerced into joining a research team, code-named SHIVA, to investigate the enigmatic event.


Walker must fight his way past political and military deceptions and a host of deadly adversaries to unlock the riddle of the SHIVA syndrome.


Will he have the physical, emotional, and spiritual strength to defy the dangers he faces…or will they destroy him before he can come to a new, challenging understanding of the nature of reality?

To Purchase The SHIVA Syndrome

As a native Philadelphian, Alan Joshua (pen name) has the appropriate fondness for soft pretzels and cheesesteaks. He is married, has two grown children, and lives in the suburbs. He is currently a practicing Clinical Psychologist with a background in Forensic Psychology.


His diverse background includes working in a State penitentiary and mental institution, a sleep laboratory, and a pain management center.


Joshua has published many nonfiction journal articles. The Shiva syndrome, his debut fiction novel, is a science fiction/paranormal mystery and thriller.


Always curious about the unknowns of human experience, he is fascinated with creativity and paranormal abilities. This led to his involvement with Psychology and research into Parapsychology.


He has explored paranormal abilities using hypnosis and in-depth interviewing of a wide range of practitioners. Among his prized possessions are a shriveled, mummified banana (a product of one healer’s biopsychokinesis) and a small, curled Austrian teaspoon produced by a German healer while six people sat around him. (see http://alanjoshua.com/biopsychokinesis )


The Shiva Syndrome incorporates his knowledge of Parapsychology and experiences with healers, intuitives, “psychic” sensitives, etc.


Unsurprisingly, he is a science fiction fan and has been influenced by such writers as Asimov, Bradbury, Crichton, Heinlein, Serling, and the extraordinary genius of Phillip Dick.


As an avid Star Trek fan, he is fond of contradicting Gene Roddenberry, believing that human consciousness and its potentials are “the final frontier.”


If you have questions for me, I would be glad to answer them–time permitting. I’d like to hear from you if you’ve had any paranormal experiences.


Visit Alan at his website
Posted by 3 Partners in Shopping at 12:02 AM