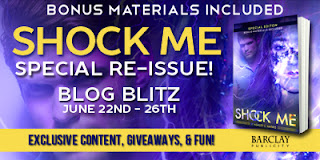 A promising gymnast, Donna Young is a shy, quiet nobody from the wrong side of town. The only exciting thing in life is her secret friendship with Ryan, her childhood crush. But after the accident—one that should have killed her—she discovers she has impossible powers! Why now, at sixteen, can she transform into something shocking and inhuman? Donna doesn’t know how to use her new abilities or who she can trust, but unveiling this mystery might lead to conclusions about Ryan that are deadly.

Rich kid, Ryan Applegate is the most popular guy in town. He has a face that should be on a poster in every girl’s bedroom and dates the hottest chick in school. But ever since the big explosion at the town’s power plant, Ryan has been keeping secrets of his own that if revealed could force him to choose between his family and the girl he's forbidden to love.

As their electrifying puzzle unfolds, so unfolds a town where friends become enemies, and enemies become unrecognizable and intertwined. Tortured heroes just might be the bad guys, and Donna discovers that her and Ryan’s secrets are powerful enough to destroy everyone... including themselves.

Author and film director Ashley C. Harris resides in Florida. Ashley was first recognized for her edgy writing and unique film work when she wrote and directed the teenage film Lines. Lines was the first feature film in the world captured using only Mac Laptops.

In 2013 Ashley teamed up with Barclay Publicity to release the first title in a new young adult series Shock Me. Ashley then went on to release the first of a new NA series, One Night In Heated Snapshots, that quickly reached Amazon's Best Selling top ten list for sports romances.

When she is not dreaming up new books and working on film sets, she loves to spend time with her friends and family.


Romance and intrigue set in supernatural world make the Shock Me series ideal for young adult and adult audiences. Readers of Paranormal YA and Paranormal Romance, and fans of Jennifer L. Armentrout, Pittacus Lore, Rick Riordan and Susan Collins will love this series. Originally published September 17th, 2013, this special re-issue is complete is a new cover and content from the author.

Excerpt
Donna
They walked down the long road by the forest. Donna’s house was furthest away. Spencer had been talking about how much he hated Randy and all the senior jocks hitting on his mom, but then changed the subject back to Rebecca’s calculator.
“I kind of,” she started shyly, blushing a bit, “figured out how to sync the calculator with my cell phone. Like if I want to text someone in class, as long as the signal has gone back and fourth at least once I can text a person from my calculator while my phone stays in my bag.”
“Say what! We can text each other during a test via our calculators?” Spencer started, “When did you learn this?”
She blushed, “I saw Paul do something similar in the seventh grade when they let us take the SAT’s early. He knows all the tricks and stuff. ”
“So you’ve been holding out on me for three years!”
“It’s not like I’ve actually done it … used my calculator to cheat.”
“Come on, it’s time we start immediately. Let me see this thing.”
She handed it to him. He took the cover off of it and hit the buttons a couple of times.
“How do you start it?” he asked.
“Um, shift and then the button that says on,” Rebecca answered, giggling on cloud
nine. Donna was only half listening to their conversation, her body felt so hot and tingly.
“What? It can’t be,” Rebecca was saying.
“What?” Donna asked, pulling herself from her thoughts.
“Its dead; I just put new batteries in it this morning.”
Just then a truck came screeching down the road filled with jocks, coming straight toward them, fast. The sound of the music scared Donna, making her drop all her books and papers.
She jumped back to one side of the road as Spencer pulled Rebecca to the other. The truck drove straight through, not even bothering to stop, going about ninety miles an hour. It was a bright red Hummer truck with fire designs on it. Only Randy had a car like that in East Applegate.
“That guy is such a … ” Spencer started to cuss when another sports car came zooming through next. It was Lynn’s bright pink convertible. She had the hood down and another cheerleader in the seat next to her. She was coming just as fast. She zoomed past them; Donna felt more heat as she went by.
“Followed by the next biggest … ” Spencer kept on complaining and insulting them, but Donna could no longer hear him. She walked slowly toward her books. Her legs felt like they’d fallen asleep all the way up. She had to concentrate on each step she took, as if it weren’t second nature to simply walk.
Another car started down the street, still far enough away that she could pick up her books. Donna shook, trying to get a hold of herself. She took a deep breath, trying to wake herself up.
The car coming down the road was in the lane next to her, but then it swerved, coming at her fast. The driver looked up, all of a sudden just opening his eyes as if he’d somehow been as tired as Donna and fallen asleep at the wheel. She heard his brakes slam as the car was only an inch away.
“Donna!” Rebecca screamed.
She didn’t move. Even if she had tried she wouldn’t have had time to. This was all happening in what felt like less than a second. She felt heat shoot through her chest to her face, down to her toes, and through to her fingers. Every limb in her body felt like it was falling asleep quickly, as if little dots inside her were jumping around. Then there was a brush of new heat, so hot, coming from the car as it hit against her flesh. The car was pouring in, surrounding her outside skin; and the top of her head itched, burning inside. Next the car passed through her, all the way through.


Praise for Shock Me:


“Memorable characters and plot momentum will keep the reader fully engaged right up to the pulse-pounding, dramatic conclusion with a stunning ending that I didn’t see coming!” ~ Lori Zalewski, Lusty Penguin Reviews


“Everyone can become a hero. That is what I got out of it. Well a lot more but that was a really powerful message. It keeps you on the edge of your seat to see what will happen next. I can’t wait for the next book and look forward to more from this new author!” ~ Kelly, Kindle and Me


“One of the best things about this book, is that it’s not like any other I’ve read recently. It’s absolutely unique. And, I loved that it was told in third person instead of first, because with all the things going on throughout the book, being able to know what more than one person was thinking was extremely helpful.” ~ Stacey Mosteller, Reading Rainblog


“Shock Me by Ashley Harris is a story with new, fresh premise and I believe that fans of paranormal young adult novels will be thrilled to read it. “  ~ Glass, Ja čitam, a ti?

Follow the blog blitz from June 22nd - 26th! One lucky winner will receive a $10 Amazon or Barnes & Noble gift card!