She gave up her future for justice...


Emma Willoughby had an idyllic life until her parents were murdered and her world, as she knew it, came undone. She sacrificed everything and even accepted a marriage proposal from a man she thinks knows the identity of the killer.


Unfortunately, he is murdered before she’s able to discover the truth. Now the Crown claims a mission to Tibet will bring the answers she seeks. The trouble is, the man who has been assigned to protect her, a man she'd once deceived, is an arrogant spy who wants nothing to do with her.


He lived a lie to protect his family...


Michael Whitfield left home nearly a decade ago, but when his childhood friend is murdered and accused of high treason, he is determined to clear his name and his killer be brought to justice no matter the cost, even if it meant accompanying the woman who turned out to be nothing more than a heartless viper. But as their mission takes twisted turns and reveals a sinister plot that threatens both their lives and the lives of the innocent, his admiration for her grows and sparks between them once again ignite. But can he trust his heart to a woman whose history holds nothing but lies? 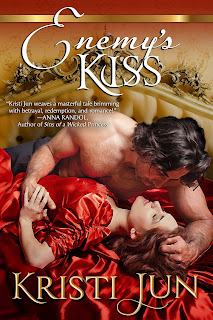 
Finding the strength, Emma pulled away from the door, walked up the stairs, and stepped into her room, biting back the hot emotions igniting again with new purpose. She had no room for tears, no room for—


A cold blade drew up to her neck and her breath snagged in her throat. Her hands gripped the culprit’s solid arm and her chin tilted up as the cold knife pressed on her neck.


His musky male scent propelled peculiar tingles up and down her spine. He lowered his free hand and slid into her bodice. She gasped when his fingers touched the tip of her breasts, heart racing with anticipation. With one flick of his hand, he pulled out a pen knife she'd hidden between the mounds of her bosoms before departing home. Before she could react he released her with a gentle shove, leaving several feet between them.


Their eyes met and her gaze swept the very tall length of him. She had forgotten how delicious he smelled. His stark blue eyes darkened and, for one single moment, she thought she caught a glimpse of lust brewing there.


Lust? Wrong. He despises you.


“Danger, Miss Willoughby, lurks everywhere.” Michael slid his knife back into the sheath tucked into his boot.


“Apparently so,” she whispered.


“I thought you were trained?” He tossed her knife on the settee.


“I am.” Her eyes swept his broad frame, the loose cravat about his neck.


“Really?” He walked around the room and tipped his head to look out the window, then back at her. “If that were the case, you would have had your knife about my neck. How many missions, exactly?”


She unlocked her gaze from his and turned to the window. She felt him approach, closer. Closer still. Her heart quickened. She dared not move.


One. But she was not about to give him the satisfaction. “I do not need to use physical force to accomplish my task.”


“Ah yes, the good old game of seduction. A skill you've quite mastered, I think. I know this first hand."


If only he knew the truth, he wouldn't be so cruel. She felt him approach her from behind, his hand caressing the curve of her neck. Slowly snaking around, he pulled her to him, her back now against his firm chest. Heat flared inside her, wishing for the impossible.


"That may work well with a target, especially when the poor soul is already in love with the spy charged to take him out, don’t you think?” he said.


“Listen well. You are an amateur at best and you will only end up rotting in the gutter if you persist.” He took several strides towards her, leaving barely a foot between them.


“So you have come here to teach me a lesson? Is that it? I can assure you that there is nothing you can say or do to deter me from my goal.”


“No, I am not here to teach anyone a lesson. But I do need to know the extent of your capacity."


“Now you know, so kindly get the bloody hell out of my house,” she warned. Walking over to the settee, she retrieved her knife and held it firmly in her hand.


He didn’t bat an eye at her blasphemy. She refused to let this man intimidate her under his scrutiny. She tipped her chin up and looked squarely at him.


“Tell Lord Tomkin you want out and I'll give you my word to deliver the message and find the killer.”


Typical male, thinking he would be her knight to save the day. No, it was her responsibility to find justice for her family and to keep him on task. “I will do no such thing. I will have my satisfaction of looking him in the eye when he is caught.”


His jaws twitched. “Then I suggest you prepare yourself because we will be entering a hostile territory in the middle of a bloody war. Gurkhas will not hesitate to slit your throat once they discover you.”


“Gurkhas?” She tried to sound impassive, but her tone gave it away.


“Nepalese mercenaries,” he said. “Quite unforgiving where the English are concerned. Lord Hastings is fighting a bloody war that no English cares a damn about.” He paused for her reaction. “And the Chinese military, well….that’s another matter altogether.”


She'd deal with them once she was there. "Thank you for the cautionary advice. I am well prepared for miscreants that cross my path."


"I don't think you are," he said carefully. "And that can be very dangerous for us both."


She glared at him. “Since you seem to have everything figured out, what is your plan?”


“Is that supposed to frighten—”


His gaze fixed on her lips and lingered, sending waves of heat through her body. She cursed herself for allowing this man to affect her. “I’m quite aware this isn't a game, Mr.Whitfield.” Her tone belied her show of confidence. No doubt he could see her quaking skin and shivering nerves.


He looked deep into her eyes. "Emma," he said, his voice taking on a softer tone. "I need you to back away from this. I give you my word I'll find the killer."


Their gazes locked and she saw he meant what he said. "I can't," she said softly, shaking her head. "I won't."


He backed away from her, his features hardening once more. “Then I only have one thing to say to you."


"And what would that be?" she said, curtly.


Kristi Jun resides in Southern California with an infinitely patient husband and a beautiful quirky son. If she isn't conjuring up another Happily Ever After, she can be found searching the web for all things English, watching reruns of Star Trek (new and old), Dr. Who, and Downton Abbey. She LOVES to hear from her readers!