The Blood of the Clans


The Amaru clan has attacked the Qiao clan. The Sakombi clan has a traitor in its midst and John is torn between his mother's clan and his father's clan.


Is it all about Chausiku or is there a new threat? One that she may not see coming. 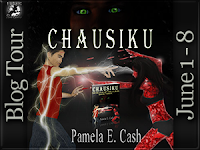 
Chassie punched in the code on the keypad lock, pushed the gate open and walked through it. John closed the gate then turned around and smacked into her. She had abruptly halted.


“What’s wrong?” he said leaning forward so that he could whisper into her ear. His body intuitively tensed for an attack and he engaged his abilities to fight.


“Someone is watching us,” she whispered automatically engaging her own powers. “I can feel it.”


He turned around, opened the gate and ran out to the sidewalk with her close on his heels. “Where is he?” he said peering up and down the street. He didn’t see anyone in the darkness.


“There!” she exclaimed pointing to the trees on her right.


Suddenly a man walked from behind a tree and stared directly at them. The shadow from the tree continued to obscure his body so that they couldn’t see his face.


Chassie gasped putting her hand to her throat. She was startled by his sudden appearance even though she had instinctively known that someone was watching her. Her feet froze in place for a second and the man took off running down the street.


The man already had a good head start and as he approached the end of the block, he turned his head to look at them over his shoulder then disappeared around the corner. John was a half block behind the man but was gaining ground. He had just reached the corner and turned when he suddenly felt nauseous.


“John, what is it? What’s wrong?” shouted Chassie catching up to him and wrapping her arms around his shoulders. Her eyes darted down the street and she could see that the man was quickly fading from sight but she didn’t care. She tried to help John stand but he couldn’t move.


“I feel so sick,” he said. “Ugh! I think I have to throw up.” He inhaled deeply and exhaled slowly hoping that it would help the nausea subside. He hung his head down and beads of sweat trickled down his forehead. Chassie dropped to her knees beside him, reached into her purse and pulled out a tissue.


“You’re burning up!” she said wiping his forehead. “I don’t understand how you got so sick so fast. We need to get you to the house so that you can lie down.”


“No, wait,” he said tilting his head to the side to look at her and taking a few more deep breaths. “I think the nausea is going away.”


“Do you think that you can stand?”


He nodded and planted one foot on the ground and paused a moment. She reached out her hand to help him up but his eyes met hers as one corner of his mouth turned up into a sheepish smile. He was slightly embarrassed that he had become so weak. He stood straight up without her help and took the tissue out of her other hand. He wiped the back of his neck and said, “Yeah, I’m fine now...that was strange.”


Her eyes narrowed as she looked at him skeptically. She put the palm of her hand on his forehead.


“That was very strange,” she said. “Your head feels cool again too.”


He grabbed her wrist to remove her hand from his head and said, “Come on, let see if we can still catch that guy.”


“Wait, John,” she said as he took a couple of steps down the street dragging her behind him. He turned around looking frustrated.


“He’s already gone, let it go…we’ll never catch up to him.” She raised her eyebrows as a thought suddenly occurred to her. “Although…you’re a Gale. Why didn’t you engage that ability?”


His eyes widened in surprise. It hadn’t occurred to him either. He had completely forgotten his other ability. “I—I don’t know…I guess I haven’t mastered controlling two abilities yet.” He frowned and dropped her wrist. Then he crouched down low in a runner’s stance, concentrated and said, “Stay here. I’m going to see if I can find him.”


She grabbed his arm before he took off. “Let it go, John. You don’t know where to start looking.”


He hesitated, not quite ready to give up the chase. The he stood up and peered down the street in the direction the man had run. He saw nothing but houses and trees.


“Yeah, I guess you’re right,” he said shrugging his shoulders. “He’s long gone by now. Did you get a good look at the guy? Did you recognize him?”


“I didn’t recognize him but I did get a good look at him. He was tall...had black hair that came down to his shoulders...” She paused unable to describe the man further.


“Is that all you can remember?” he said sarcastically. “That’s not much help.”


“You know I’m not great at giving detailed descriptions,” she snapped putting her hands on her hips and frowning. She didn’t appreciate his attitude! “But I would know his face if I saw it again.”


“I’m sorry,” he said sliding his arm around her shoulders. “I’m just pissed that the guy got away.”


Her face softened at his touch. She knew that he didn’t mean for her to take it personally.


“I know,” she said with a small smile, slipping her arm around his waist. “Don’t worry...I’ll know when he comes back. I’ll feel him.”


She gave him a hug then turned away and headed back to her house. “Come on, let’s go inside. I need to tell my grandmother about this.” He didn’t immediately follow her. He was still contemplating going after the man. She looked over her shoulder at him as she walked and continued, “Do you need help walking? I can float you into the house using my telekinesis–”


“No! Really…I’m fine now,” he said shaking his head sharply. He still didn’t like her moving him around like a rag doll. He jogged a few steps to catch up with her and said, “Let’s go.”


When they reached the gate, Chassie entered the code again then John pushed it open and held it for her to walk through. As she passed him, he tilted his head to look around her shoulder and took one more futile glance down the street...even though he knew that the man would be nowhere in sight.


“John...” said Chassie without turning to look at him.


He shrugged and followed her to the house.


Pamela E. Cash lives in Chicago with her family. Her daughter inspired her to write the Chausiku Series.


a Rafflecopter giveaway
Posted by 3 Partners in Shopping at 12:02 AM