Destiny Finds Her by Miranda Lynn Book Blast and Giveaway 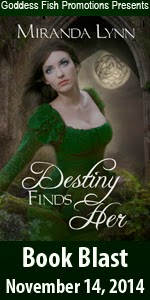 
Jami Morgan travels through time to fulfill a destiny set in motion hundreds of years in the past. Devlin O’Rourke’s life is turned upside down from the moment he sets eyes on Jami. Will Jami be able to accept her heritage, melt Devlin’s heart, and harness her powers in time?

Destiny sends Jami spiraling through time to find the love of a Highland warrior, and the magical secret inside her own heart.


As he ventured further along the tree line, the birds started chattering and became restless. The squirrels quickly climbed trees, hiding in their little holes. Devlin’s ears strained to hear what they were hearing. He stepped into the tree line, and faded into the shadows, awaiting what threat may come. His hand went to the hilt of his sword, muscles tensed, ready for a fight. What he saw next was completely unexpected. 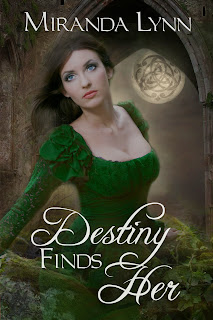 A young woman treaded softly out of the trees, along one of the many paths the healers used to forage for herbs and fetch water from the brook; a woman Devlin had never seen. She was not garbed in the traditional broadcloth dress, but in pants and some type of jerkin. He’d never seen such clothing. Her hair was pulled away from her face and high atop her head, in a small circle


with a tail flowing to her shoulders. Much like a horse’s tail. He stood silently, waiting to see what she’d do.


This woman was not from around here; that much was obvious. His muscles coiled, ready to pounce should she take off toward the keep. She simply sat down on the top of the hill, in the rays of the sun, and watched the children. She seemed to be in awe of what she saw in front of her.


Devlin wove silently through the trees to the path she’d emerged on. Advancing with years of learned stealth, he moved up behind her. When he was within a few steps, she still was unaware of his presence.


The breeze brought a whiff of her scent to him. A sweeter smell Devlin had never encountered. His body reacted immediately. His knees went weak as he breathed her in.


"Who are ye?" Devlin demanded, sounding a bit gruffer than planned.


She jumped, and was gone. Like a ghost into the night. He couldn't believe his eyes. Glancing down, he saw the slight indention from her footsteps. He followed them down the path until they abruptly ended at the brook. He searched the area for her campsite or any signs of where she’d come from. She was a mystery.


After minutes of searching, a sound wafted up to his ears. Tilting his head, he recognized the bells of the gypsy troupe that travelled through the lands. It was time for him to head to the keep and resume the duties of middle son. 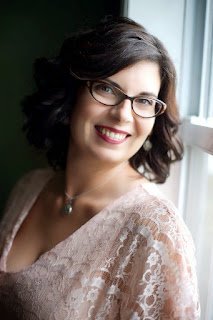 
Mother to two boys, 3 four legged babies, and wife to a loving husband who doesn't mind the extra voices in her head. Miranda grew up on a dairy farm in Illinois, but calls Portland, TN home now. She is an avid reader, coffee addict, and loves her day job working at the local public library. Though her true passion is in creating her own worlds, characters, and stories for her readers.